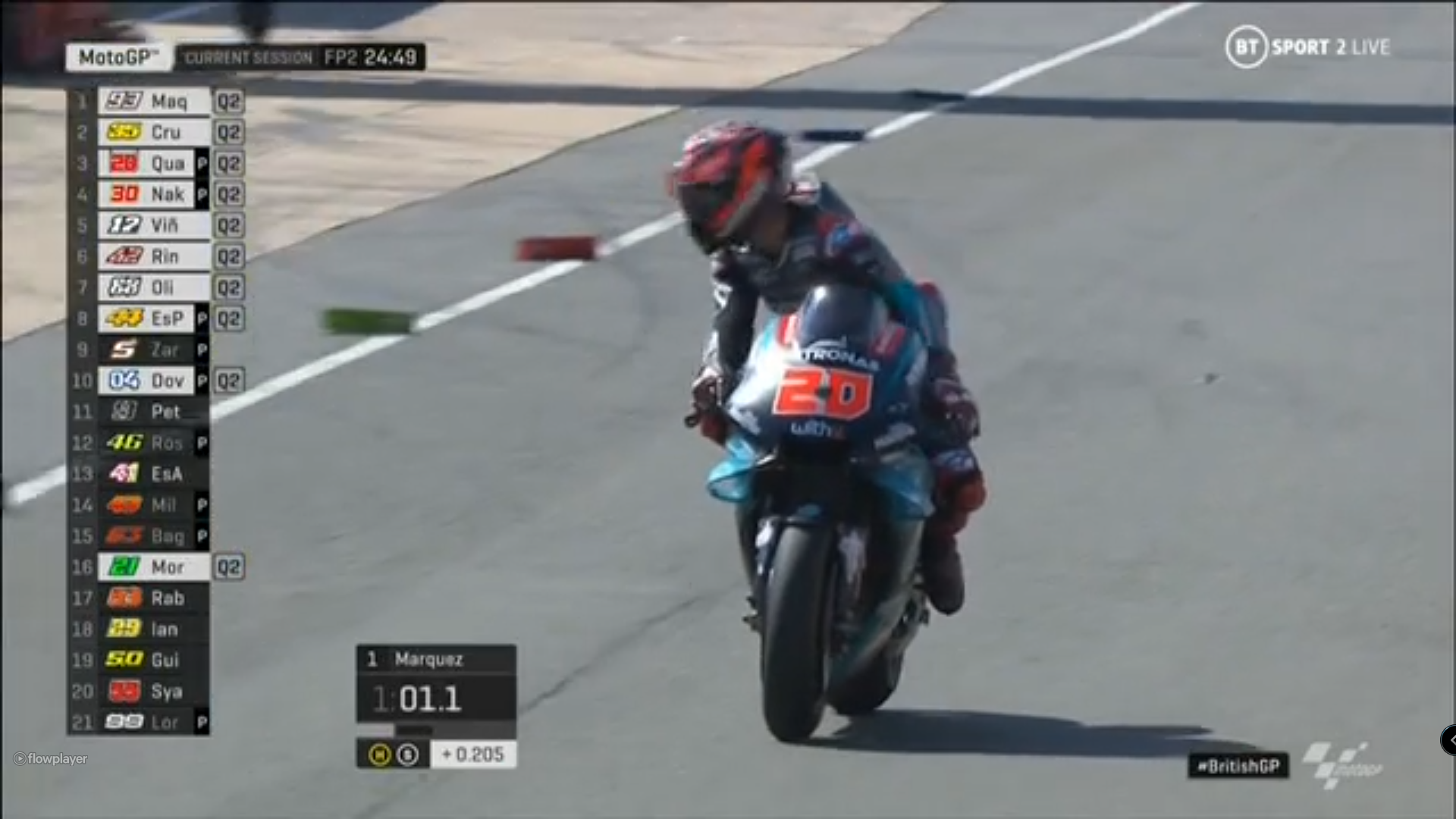 The best Laps made in FP2 by Valentino Rossi, Fabio Quartararo and Takaaki Nakagami had been canceled. The race management finally restored them.The second free practice session ended with the best time for Fabio Quartararo. But the Petronas rider had his lap time canceled, as he was believed to have bitten onto the green stripe at the exit of Turn 6. Same for Valentino Rossi and Takaaki Nakagami.
But after photo verification, the race management decided to correct this decision and restore the times of the three drivers. This totally changes the results of the FP2 because:
- Fabio Quartararo finishes 1st and beats the absolute record of the circuit in 1'59.225. Before that, he was ranked 11th.
- Valentino Rossi goes back to 4th place and is positioned as one of the tenors of the day. Before that, he was ranked 17th.
- Takaaki Nakagami passes 11th and finds himself at the doors of the top-10. Before that, he was ranked 14th. 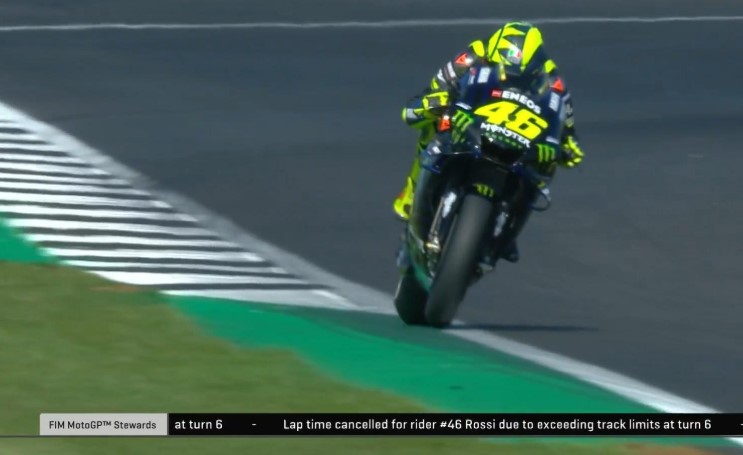 Thanks to a track limit photo review after FP2 had ended, Fabio Quartararo’s (Petronas Yamaha SRT) 1:59.225 was allowed to stand to give the rookie phenomenon the advantage on Friday at the GoPro British Grand Prix – and a brilliant new lap record. Marc Marquez (Repsol Honda Team) sits as Quartararo’s closest challenger, 0.251 splits the duo, with Maverick Viñales (Monster Energy Yamaha MotoGP) completing the top three.

FP1 started under cloudy Silverstone skies as the MotoGP riders got their first taste of the new asphalt, and it was Quartararo who came into FP2 with a half-second advantage over the rest. Marquez was his nearest rival in the opening session and it was the number 93 who instantly led FP2, cutting Quartararo’s overall standings advantage to two-tenths having got himself down into the low 2:00s. Other early improvers were home hero Cal Crutchlow (LCR Honda Castrol), the British rider dipping into the 2:00s while Pol Espargaro (Red Bull KTM Factory Racing), Miguel Oliveira (Red Bull KTM Tech 3) and Crutchlow’s teammate Takaaki Nakagami (LCR Honda Idemitsu) climbing into the top 10. 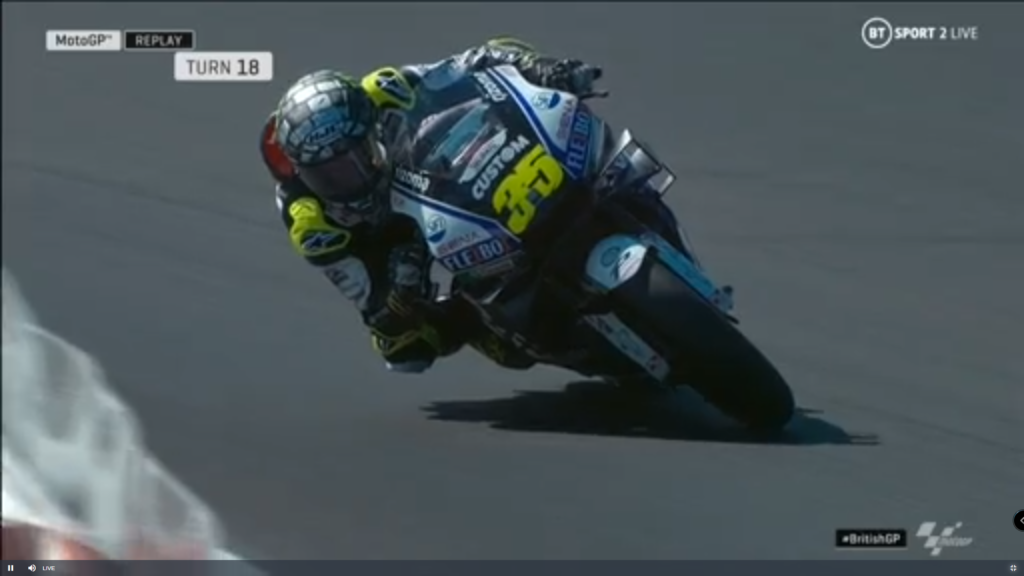 Temperatures in England – believe it or not – were soaring and it seemed the riders were struggling to improve their times from FP1, with Marquez sitting over seven tenths clear of the field for the first half of FP2. However, it wasn’t plain sailing for the seven-time Champion, at the Vale complex, Marquez crashed for the first time since Le Mans Q2 – rider ok. FP1 P4 finisher Alex Rins (Team Suzuki Ecstar) then moved into second in the session, with Quartararo then building pace to go within half a second of Marquez’ FP2 time.

However, the quick times were about to be posted. With eight minutes remaining, fresh Michelin rubber was slotted in as a thrilling time attack then played out. Riders like Jack Miller (Pramac Racing) – 10th in FP1 – had slipped down to the lower ends of the timing screens, but the Australian jumped up to fourth overall which set the tone. Two Yamahas were on barnstormers. Valentino Rossi (Monster Energy Yamaha MotoGP) looked set to go top overall – and he did, a new lap record for the Italian. But ‘The Doctor’ didn’t stay there long as rookie Quartararo then hammered in his stunning 1:59.225. The quickest ever lap we’d seen around Silverstone – the new asphalt, Michelin tyres and the Yamaha seemingly on song. However, the duo’s lap times were then cancelled due to track limits – but there was drama to follow after the session had finished.

In the meantime, this relegated Rossi from second to 17th, Quartararo dropped to fourth thanks to his FP1 time. Meanwhile, Viñales took over at the top before Marquez then beat his compatriot with a 1:59.476. Right at the end, Crutchlow and Andrea Dovizioso (Ducati Team) exchanged third and fourth respectively to get themselves up from P8 and P6 from FP1. After finishing fifth in FP1, Franco Morbidelli (Petronas Yamaha SRT) was strong on fresh tyres to end the day sixth on the combined times, with Oliveira once again impressing to lead the KTM charge in P7 – the Portuguese rider improving from P16 in the opening 45 minutes.

Miller’s aforementioned time was enough to earn him P8, the number 43 leads fellow Desmosedici man Danilo Petrucci (Ducati Team) in ninth, with Aleix Espargaro managing to get back out on his Aprilia Racing Team Gresini bike after his first one completely cut out heading into Brooklands corner – the Spaniard claims the final provisional automatic Q2 spot in P10.

However, after a photo review once the session had drawn to a close, Quartararo’s and Rossi’s fastest times were reinstated. This saw Quartararo crowned as Friday’s fastest man and the new lap record holder at Silverstone. Rossi would be promoted back to P4, which saw Espargaro get shuffled out the top 10. 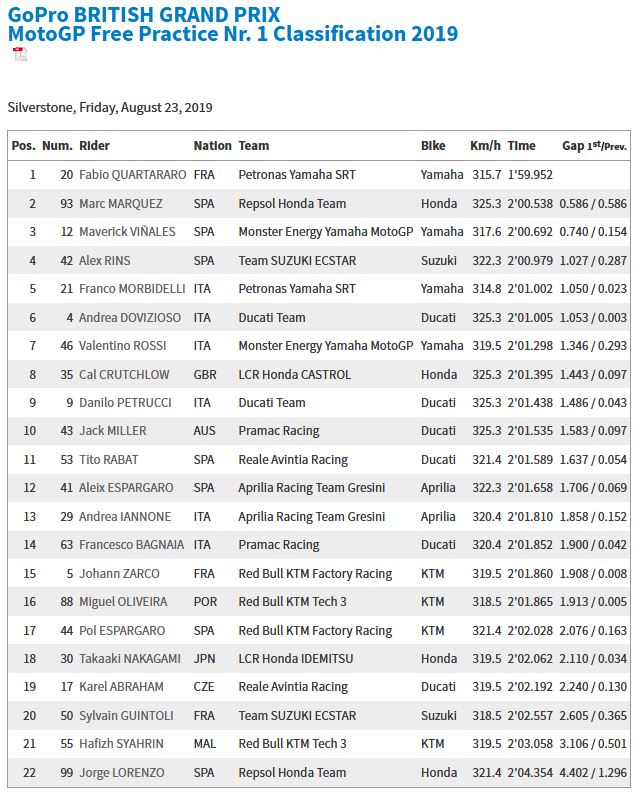