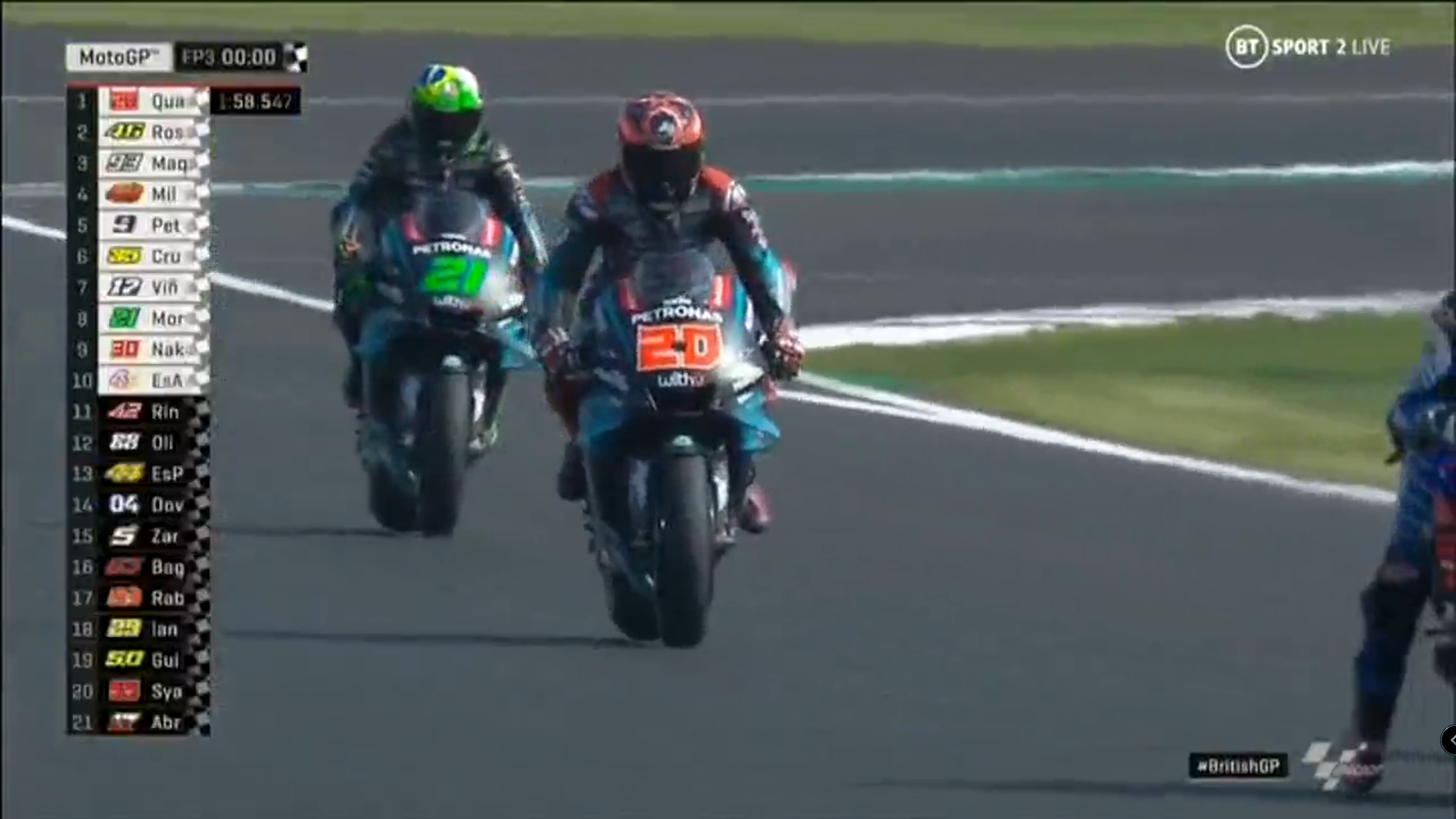 Fabio Quartararo, Valentino Rossi took revenge on their Chronos Bad Note and make 1-2 in Combined Times. Andrea Dovizioso will go to Q1... Quartararo breaks lap record again to beat Rossi to top spot! The rookie sensation managed to get the better of The Doctor with his final flying lap to lead the charge into qualifying

Petronas Yamaha SRT’s Fabio Quartararo continued his dominance at the GoPro British Grand Prix by smashing the outright Silverstone lap record for the second time this weekend to top FP3. But, he was pushed hard by Monster Energy Yamaha MotoGP’s Valentino Rossi, who clinched second place ahead of Repsol Honda Team’s Marc Marquez.

In a frantic FP3 session, the top six riders all went quicker than Quartararo’s previous best-ever Silverstone lap from FP2 yesterday, with the pace continuing to go further and further into unchartered territory. 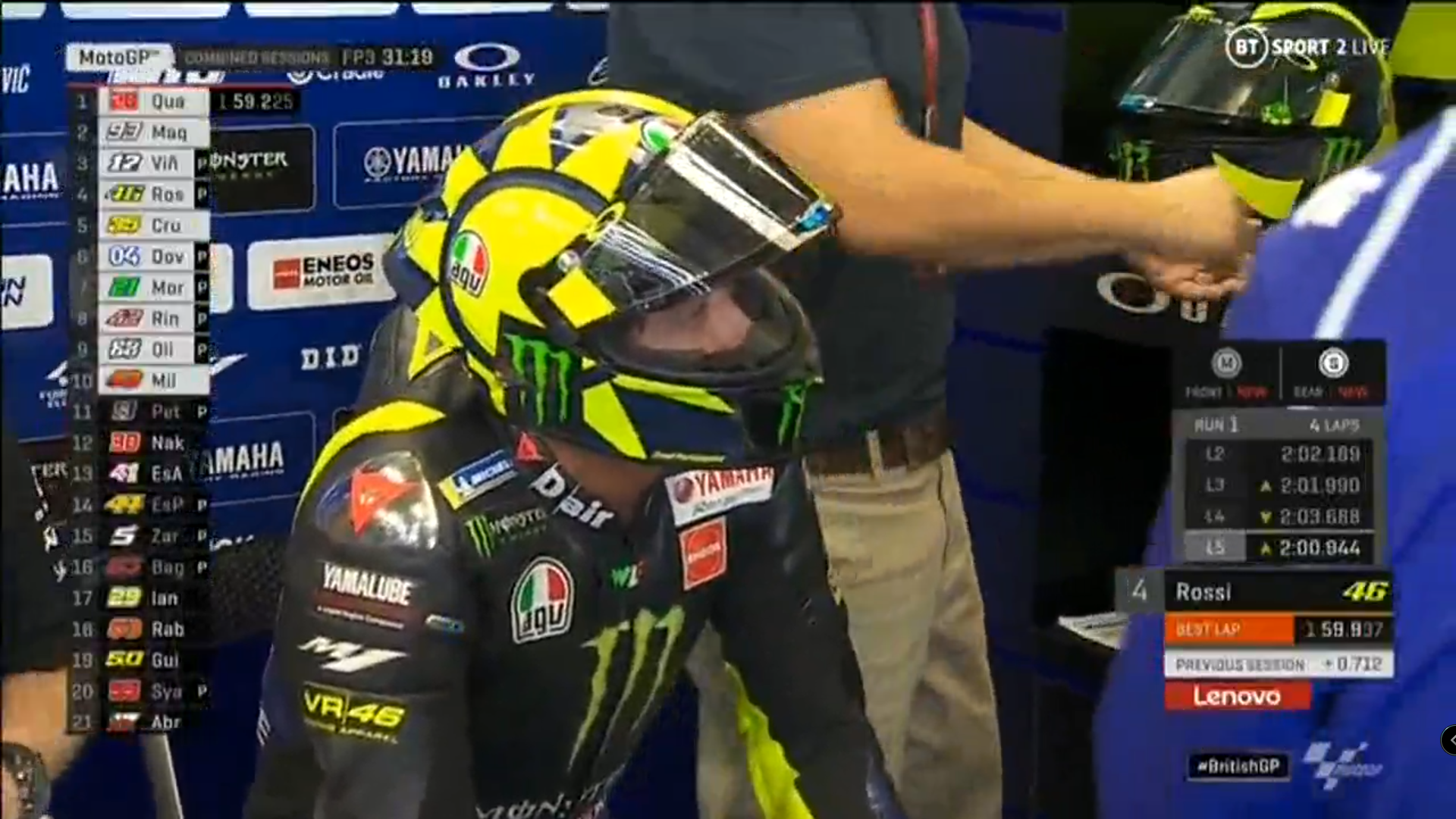 With just a few seconds left, it appeared as if Valentino Rossi was going to head into qualifying on top but the rookie sensation still had more in the tank. A 1:58.547 with his final flying lap moved the Frenchman 0.146 seconds clear of The Doctor, who himself was 0.220 ahead of World Championship leader Marquez. All three, incidentally, dipping beneath the 1:59 barrier.

Pramac Racing’s Jack Miller ended fourth, but he had to work hard for it. With less than 20 minutes remaining on the clock, the Australian’s Desmosedici cut out at the end of the Hangar Straight and it appeared as if time was against him. However, he managed to get back to the garage and out of pitlane in time to salvage a place in Q2.

Ducati Team’s Danilo Petrucci will join Miller in Q2 later today, but they will be the only two representatives from the Bologna factory. Andrea Dovizioso had a disastrous morning by ending 14th overall and, just two weeks after his sensational Austrian GP win, he’ll now have to fight it out of Q1. 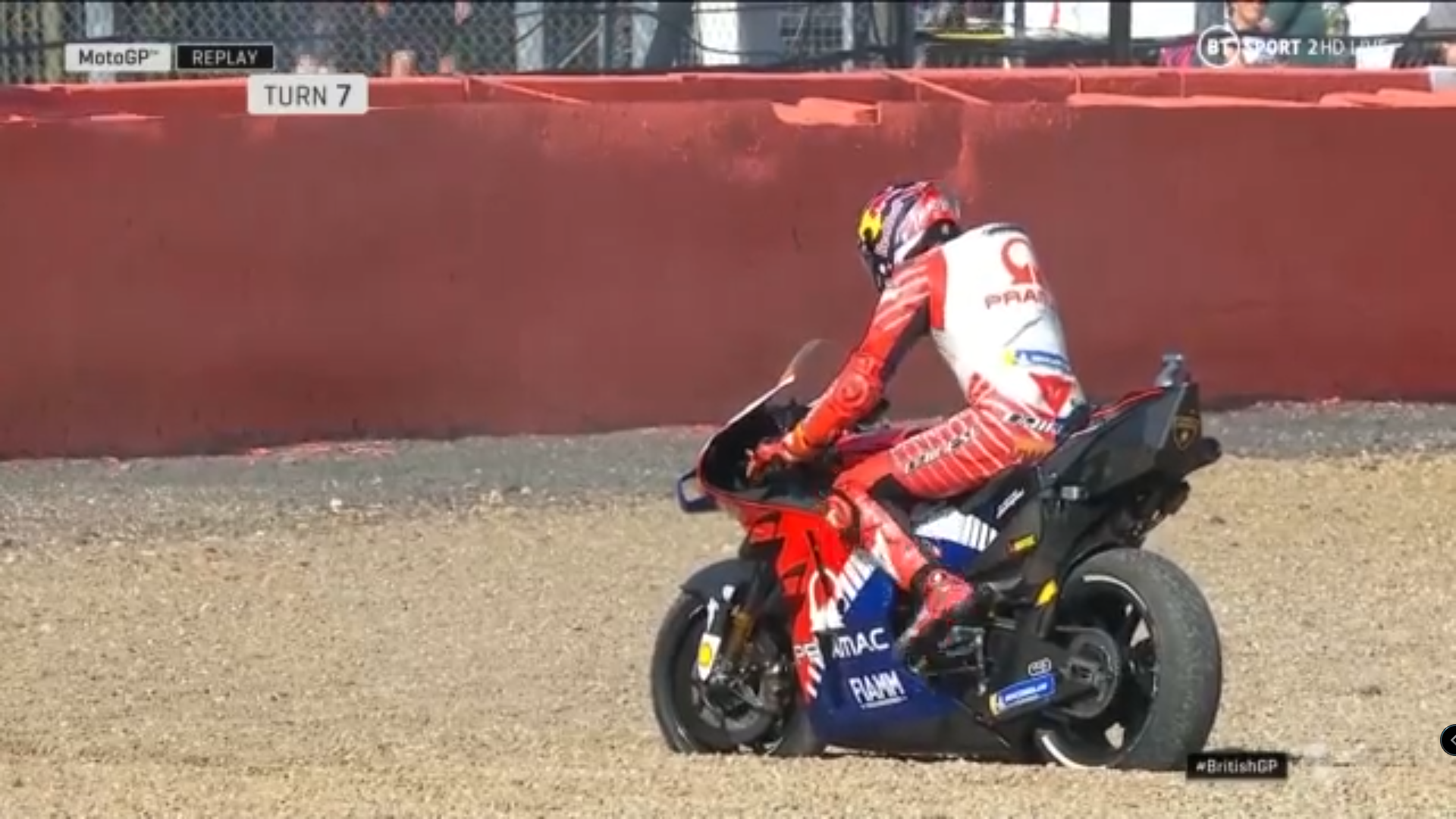 LCR Castrol Honda’s Cal Crutchlow did sit pretty at the top of timesheets with just under 15 minutes remaining after being the first man to dip beneath Quartararo’s lap record from FP2, but the Brit eventually slipped back to sixth. Following Crutchlow was the Yamaha duo of Maverick Viñales (Monster Energy Yamaha MotoGP) and Franco Morbidelli (Petronas Yamaha SRT), with the blue brand the only factory to have four riders straight into Q2.

A late charge from Takaaki Nakagami (LCR Idemitsu Honda) saw the Japanese rider secure a place in Q1, just ahead of Aprilia Racing Team Gresini’s Aleix Espargaro, who’s straight through to Q2 for the first time since Le Mans. Team Suzuki Ecstar’s Alex Rins did look comfortable inside the top ten for the most part of the session, but a flurry of late laps cost the Spaniard dear as he will now join Desmo Dovi in Q1 later. 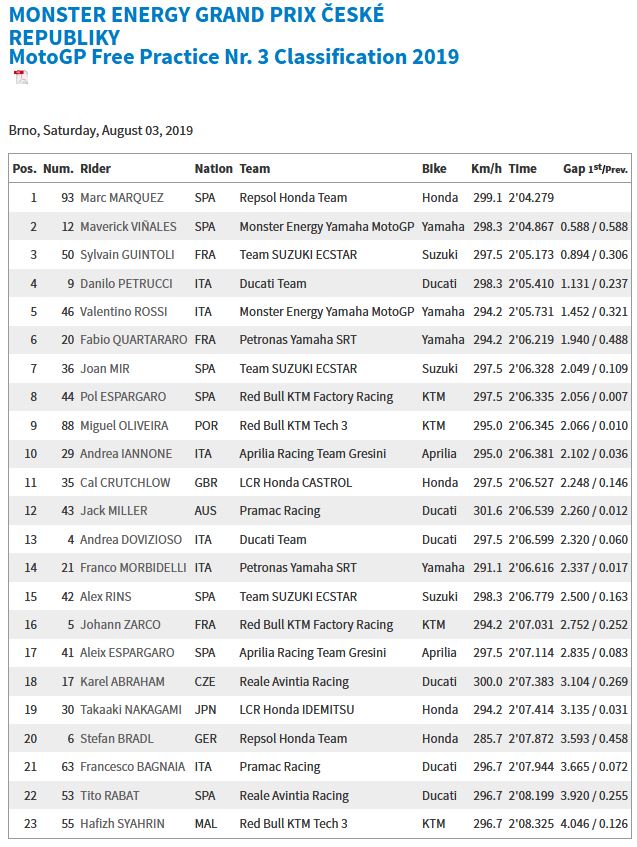