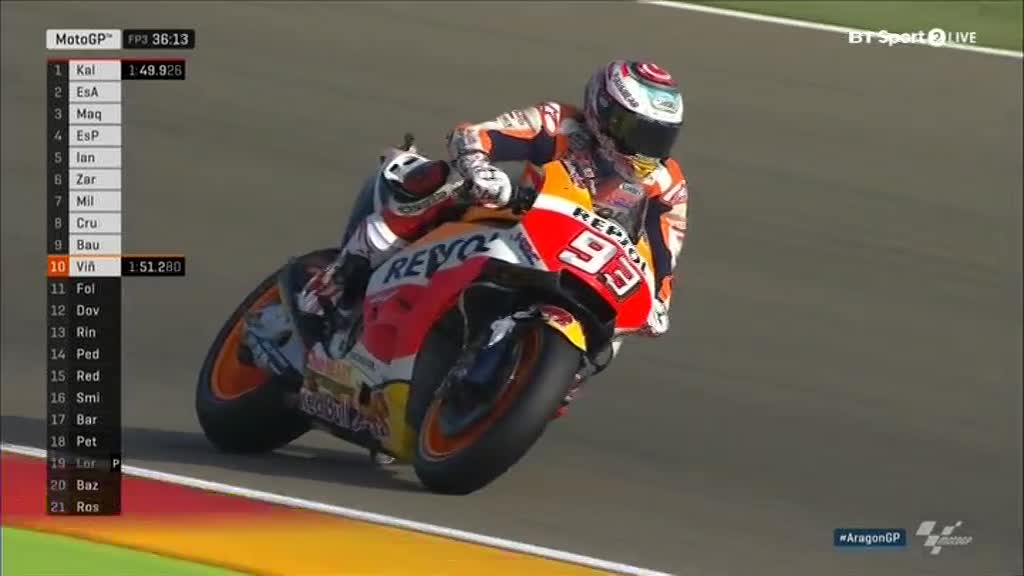 And Kallio to an excellent P5 on the ever progressing KTM.

Marquez leads the charge to Q2 – and Rossi moves through

Every manufacturer will be represented in Q2, with Valentino Rossi also making the cut despite injury

With early morning fog burning off, it was down to business under clear skies for the first time at the Gran Premio Movistar de Aragon. After Friday running was so affected by the weather, the third practice session was a flurry of activity for most, and came down to a final shootout as riders vied for direct entry to Q2 qualifying.

Behind Pedrosa is Alvaro Bautista (Pull&Bear Aspar Team), who shot up into fourth – with a stunning performance from wildcard Mika Kallio (Red Bull KTM Factory Racing) completing the top five as the leading bike for the Austrain manufacturer. Equal on points with Marquez, Andrea Dovizioso (Ducati Team) was another who shot out the blocks early, and he took P6.

That leaves a number of high profile names heading through Q1 – including 2014 and 2015 Aragon GP winner Jorge Lorenzo (Ducati Team), who was P11, and Monster Yamaha Tech 3 duo Johann Zarco and Jonas Folger; the German following a crash.