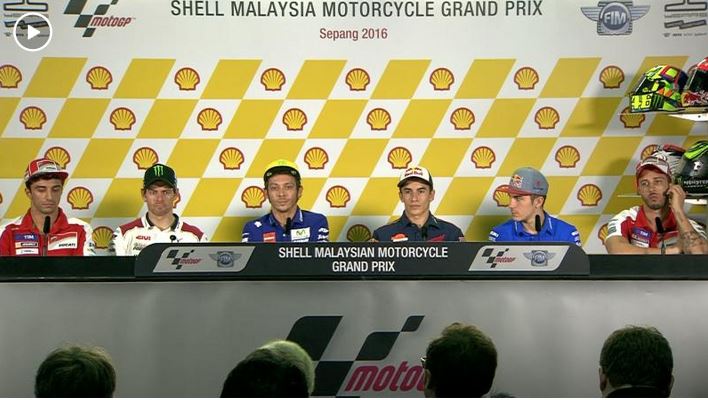 Marquez was first to talk, setting out his aim for the weekend – and wants to compare the track’s new surface with his experience in pre-season testing. “Phillip Island was a difficult weekend, and then I made a mistake in the race. We’ll try here to push from the beginning again, but with a different result. I’d like to finish as a minimum! But hopefully I’ll get on the podium and fight for the victory.

Here it’s completely different and a lot warmer. This year the layout is the same but the surface and some of the banking in corners has changed. It will be interesting to see how we compare to the pre-season. We’ll see how the grip is with all bikes out on track, and see how the tyre wear is. I think it will be a normal weekend with the tyres and we’ll concentrate on the riding.”

Rossi, who arrives from a storming race in Australia from fifteenth on the grid to the podium, is now ready to refocus on Sepang – hoping conditions allow more time to work during the practice sessions. “I enjoyed the race in Phillip Island a lot. I was fast and strong and felt good with the bike, but I think in the second half of the race there I wasn’t strong enough – Cal was stronger than me. Now we concentrate on Sepang, and it’s a track I like a lot but it’s the toughest race of the season with the temperature. Now we have the new asphalt and we’ll see. Hopefully we’ll have more time in practice to setup for the race, and then try and get on the podium.”

Another of those to have fought back from a Q1 knockout at Phillip Island was Maverick Viñales, who attacks Sepang aiming high but with an open mind – with the only concrete goal as yet to qualify much further up the grid. “Here in Malaysia we’ll try and have a better qualifying – on the front row or second row at least – and give everything. Normally I go quite well here, but last year with less power and without the seamless gearbox it was difficult. But now, we arrive with an open mind. This is one of the most difficult races – both physically and on the bike – so we’ll try to be at 100%.”

Cal Crutchlow is the only rider who has as yet tested the new track surface, as the LCR Honda rider did a Michelin test at the track following the asphalt changes. The Australian GP winner said the grip then had been less than expected – but recognized there were only a handful of bikes on track and other evidence seems to suggest the new surface will be faster.

“We know from the race in WorldSBK that the grip of the new asphalt is good when the track cleans up. They were going faster,” explained the Brit. “So we look forward to seeing how it evolves. Hopefully it will stay dry. Turn 15 is a slightly strange corner now – the braking point is nearly the same but with the track dropping away you have to be more patient. Maybe that adds a bit more excitement for everyone.”

Ducati Team’s Andrea Dovizioso agreed with the challenge of the conditions, and wants to see how the promised higher levels of grip translate into race performance for the Desmosedici GP16. “It’s tough but it’s always nice to ride a track like Sepang – especially on a MotoGP bike because you can use all the power. The temperature and conditions are on the limit but they’re the same for everyone. The straights should suit us but the grip will make the difference so we’re interested to see how the conditions are. If there’s good grip, with the improvement we’ve made in the last two races, we have the chance to have a good race.”

Dovizioso’s teammate, Andrea Iannone, was also present as he gets back in the paddock after missing four races due to injury sustained in a crash in Misano - knowing Sepang is tough and made tougher by his ongoing recovery. “I am very happy to be back in the paddock – back in my world. My condition isn’t so bad, for sure I’ve improved a lot but I’m not yet at 100%. I talked a lot with the doctor and he told me that to get back to 100% is two or three months – but I wanted to come here because I miss the bike and the team. I’ll try my best here, and in the last two races. The Sepang track is difficult, and I think it could be a difficult weekend for us – with my condition and the temperature, but we’ll try to improve step by step through practice and close the weekend with a good result.”