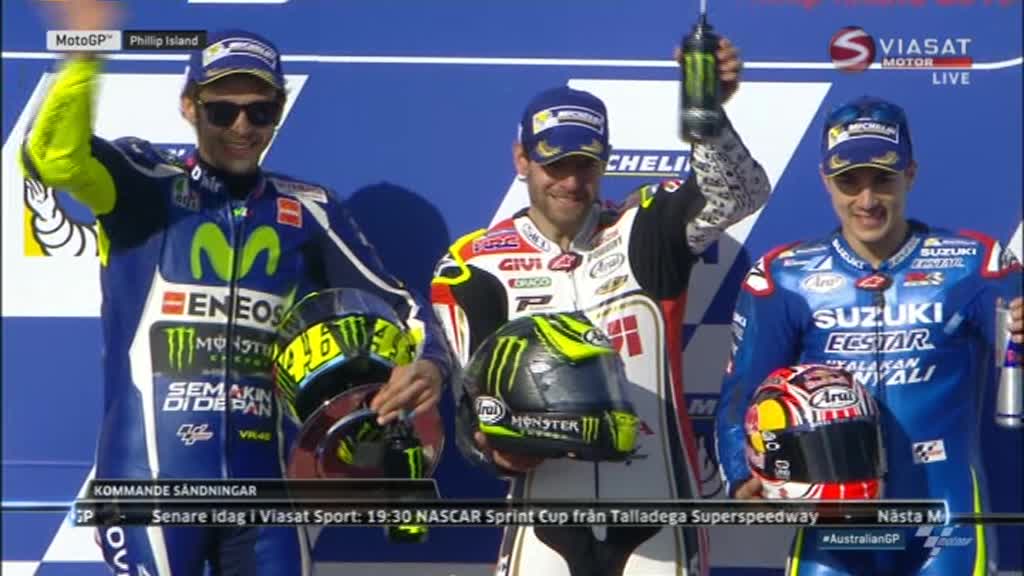 Any intent of humor regarding the excellent "Cool & The Gang" Rock Group would be a fiber of your fertile imagination...

An incredible Race for the Brit and an Amazing ride for Valetino Rossi that rocket him from P15 on the Grid to P2 on the Podium.. Here are all report from Official MotoGP sources....

There were no miracle starts for those frontrunners starting further back for the Australian GP, with Jorge Lorenzo (Movistar Yamaha MotoGP) getting the best from P12 to move up to P9, and teammate Valentino Rossi gaining two places to P13 – with Maverick Viñales moving up only one. It was Pol Espargaro (Monster Yamaha Tech 3) who got the holeshot from P3 on the front row, with polesitter Marquez the biggest loser off the line – before the 2016 MotoGP™ World Champion swept back around the outside of Doohan Corner to take back P2 and then fight off Espargaro through Lukey Heights and down into T10. Once at the front, the Motegi and Aragon winner set off in his rhythm – soon seconds clear.

The fight for P2 between Crutchlow and Aleix Espargaro (Team Suzuki Ecstar) saw the Brit emerge on top, as Rossi was charging through the field – picking off Pol Espargaro and Andrea Dovizioso (Ducati Team) as the rider from Tavullia entered podium contention, then setting his sights on Aleix Espargaro and soon getting past.

Nearly three seconds clear at the front, there was suddenly a Repsol Honda sliding through the gravel at Turn 4 – and Marc Marquez was out of the Michelin® Australian Motorcycle Grand Prix.

Crutchlow then found himself in the lead, hoping the 2014 flashback for Marquez wouldn’t touch him after a last lap crash two years ago – as Rossi began his hunt for the LCR machine, over two seconds back but on an amazing roll from P15 on the grid. As the British rider continued pulling away, Rossi then got a warning shot at Turn 4 that saw him run deep and lose ground, as the new fight for the final podium spot saw Aleix Espargaro locked in battle with Dovizioso – and Viñales soon getting involved.

After swapping positions in a three-way fight, Turn 4 then claimed another victim as Aleix Espargaro lost his Suzuki machine with 5 laps to go, and teammate Viñales broke the resolve of Dovizioso to take the final place on the podium and head the Italian home.

After his storming start, Pol Espargaro took a solid result as he crossed the line in P5, ahead of a struggling Jorge Lorenzo – who was unable to make up big ground after his good start.

‘Kentucky Kid’ Hayden, standing in for injured Dani Pedrosa at Repsol Honda, put in an impressive one-off return to his 2006 championship winning colours as he battled well within the points, before Miller took Turn 4 a little overenthusiastically and Hayden was the casualty, sliding out.

Hector Barbera was another crasher, leaving Redding to lead compatriot Bradley Smith over the line for P7, with the top ten completed by Petrucci and Miller. As well as the solid result for Miller, fellow Australian Mike Jones scored a point on his Avintia Racing machine as he replaced Hector Barbera, impressing once again.

Another Independent Team win in 2016, another win for Cal Crutchlow, and a little glimpse of the old Marquez. A fight back from outside the top ten to make the podium – for both the bikes who crossed the line behind the Brit – and some spectacular racing at Phillip Island once again. Next up is Sepang International Circuit – and another chapter of an incredible 2016. 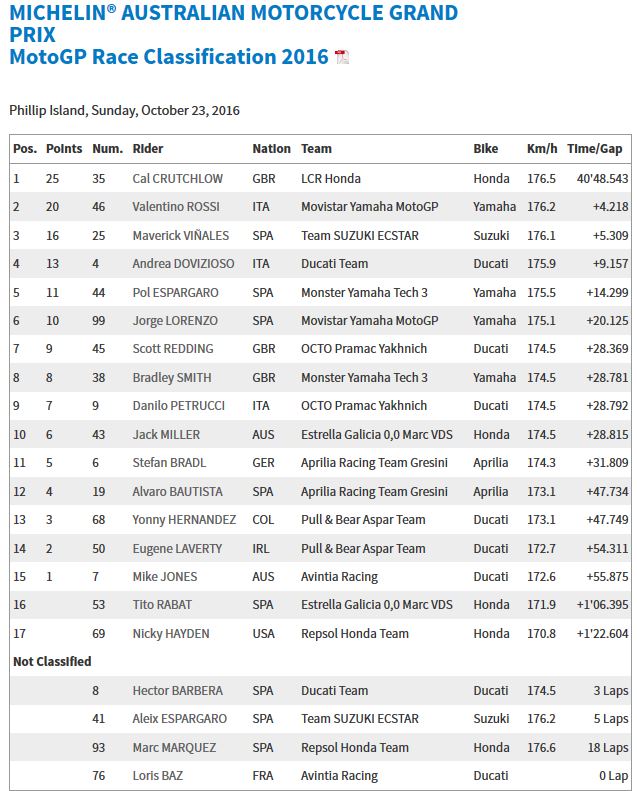