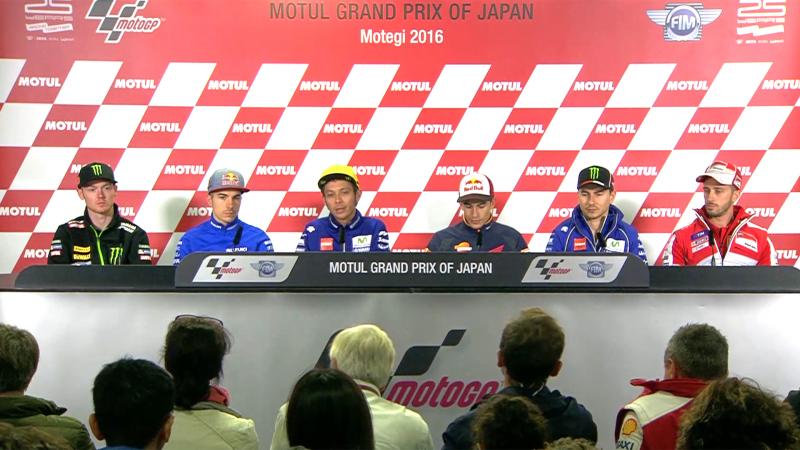 Marquez began proceedings, and immediately wanted to divert talk away from his first mathematical shot at wrapping up the 2016 Championship. “Here is the first chance but there’s no need to talk about it!” said the 2013 and 2014 MotoGP™ World Champion. “So many things would have to happen – and it’s nearly impossible. I’m going to have the same mentality as until now, just work hard. We know Motegi won’t be like Aragon but I think we’re getting better and better. It’s a good circuit for my riding style but with our bike we struggle a bit here every year, but we’ll see because we also thought we’d be far in Misano but we were closer.”

With that same mentality, Marquez has a clear aim for the weekend: “To take points for the Championship is the most important, and if we can get on the podium, even better. Now we have three races in a row it’s important to finish all the races and stay calm in the practices because there are two more races soon. It doesn’t matter when or where, the important thing is to achieve our goal.”

Next to speak was P2 in the title - 52 points back on Marquez -Valentino Rossi. The Italian is optimistic for the weekend, but knows the key could rest with the Michelin rubber and understanding how to get the best out of it.

“This is a good track for us usually,” said Rossi. “I’ve had a lot of podiums but not so many victories. It’s a good track for the Yamaha but every year is different and as in every race this season we need to understand the tyres. I hope the weather is good and it’s warmer, because today it’s very cold. Three races in a row is always difficult – you can have a small problem in the first one and you pay very much. But they are three fantastic tracks!”

Teammate Lorenzo agreed the Yamaha suits the Twin Ring Motegi, and was also ready to get down to business understanding the 2016 package at the venue after having dominated much of the recent track time at the manufacturer’s home track.

“We came back strong and this track should be good for my riding style - and the Yamaha,” agreed Lorenzo. “Let’s see how the tyres and the electronics are – if it’s similar to the last three years we should be ok.” The reigning World Champion also had a wholly positive view of the challenging three race stint, finding it physically easier in some ways to race back-to-back: “I like three races in a row, I like to stay on the bike as much as possible. When you stay on the bike more, your muscles are more ready.”

Maverick Viñales goes into the weekend trying to fight his way back into the top four of the Championship – and is happy to kick that project off in Motegi; a track that has usually been kind to him. “Last year here was good for me and I’m really motivated. I think it will be hard but maybe a bit better than Aragon. Here has always been a really good track for me, especially in Moto3, and it’s good for my riding style.”

Andrea Dovizioso was another optimist ahead of the Japanese GP, having been on pole at the venue in 2014 and had two top five finishes in the two most recent Motegi race weekends. “On paper this track looks good for us,” said the Italian. “We have strong acceleration. But, the tyres will make the difference and we’ll have to see tomorrow. In the last two years we’ve been quite competitive and I think we can be even better this year.”

Bradley Smith made his first appearance back in MotoGP™ since damaging his knee in a practice session for the Oschersleben 8H after the Czech GP, and although physio and recovery is ongoing, the Brit is glad to be back on track and see how the injury holds up over a MotoGP™ weekend - rather than a gym simulation of one.

“It’s nice to be here,” smiled the Brit. “It’s been a challenging seven weeks and it’s not fun watching this from the sofa. Physio’s been tough but my heart and head are 100% so I’ll try and make up whatever my knee is still lacking. Tomorrow I just want to get out on track and do some laps.” 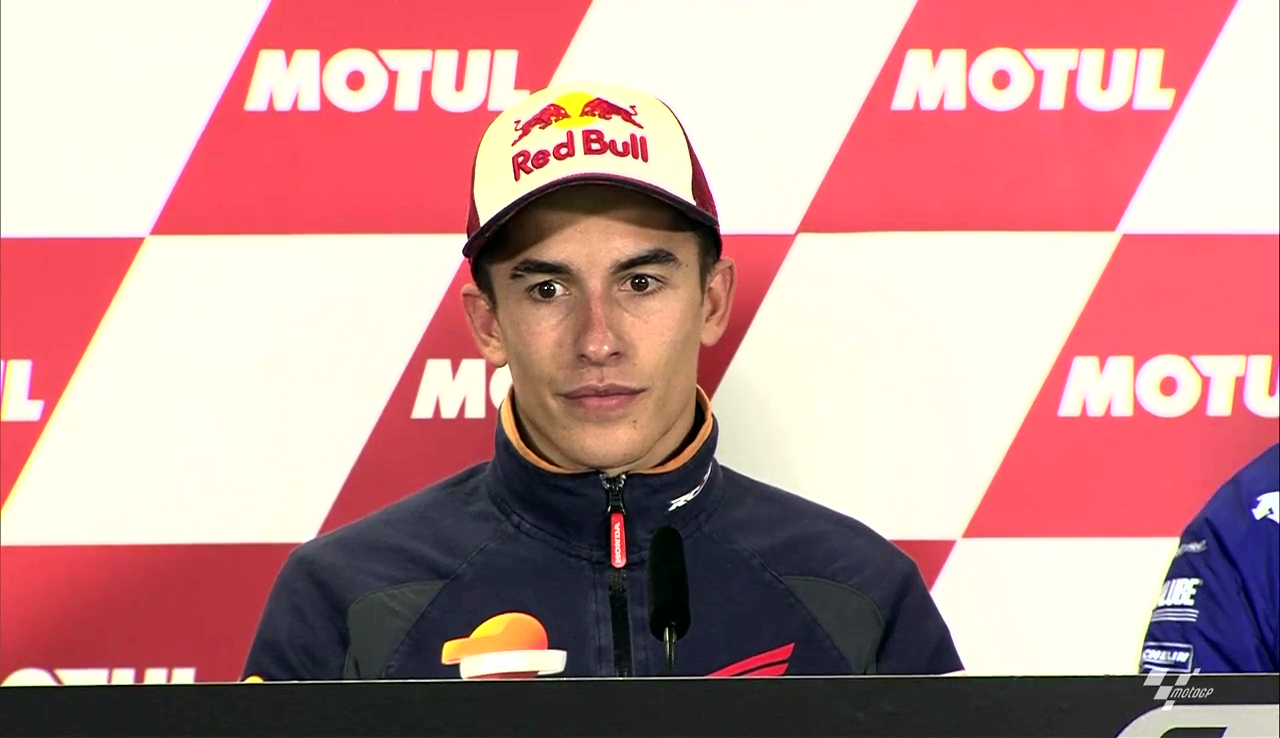 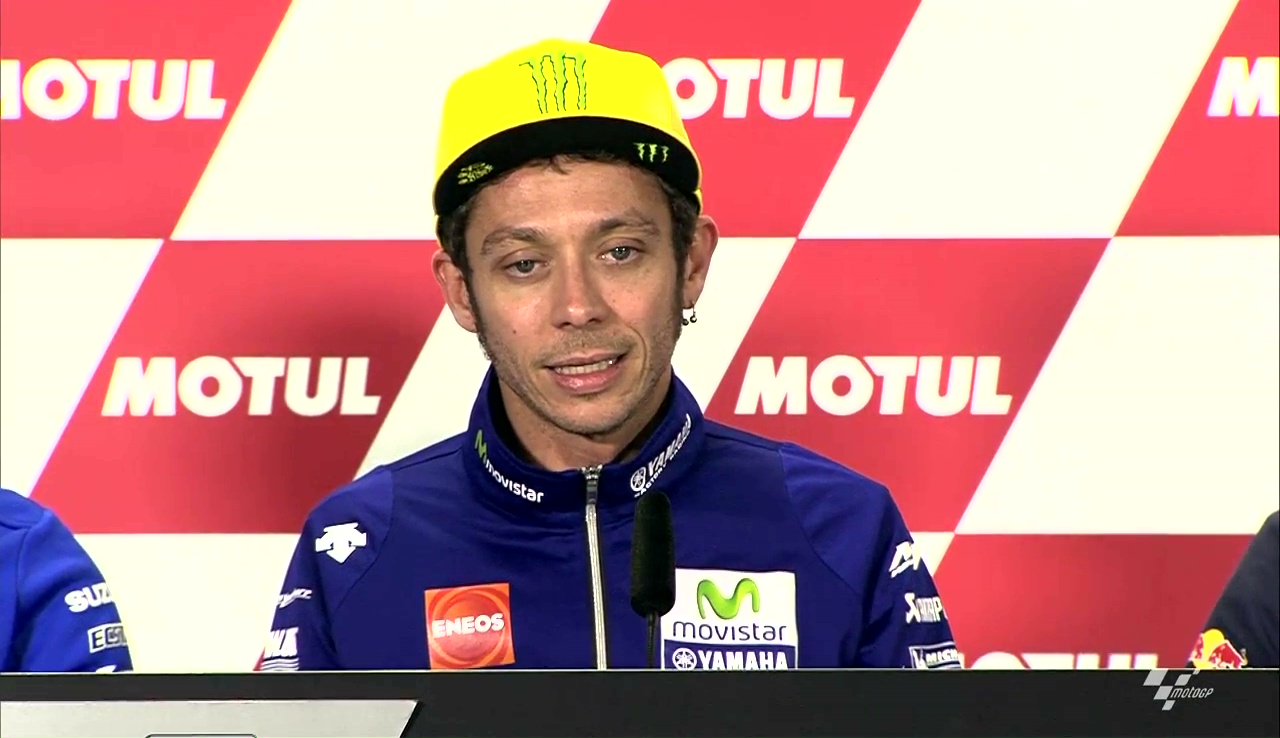 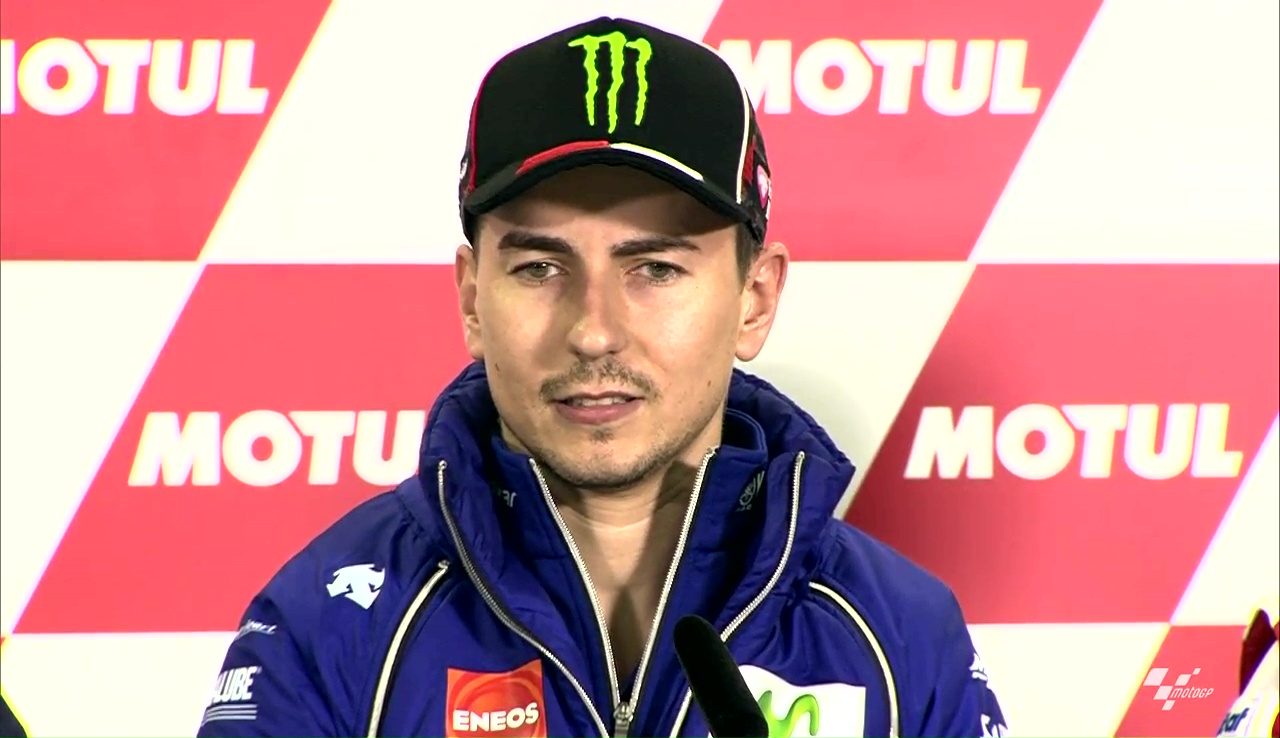 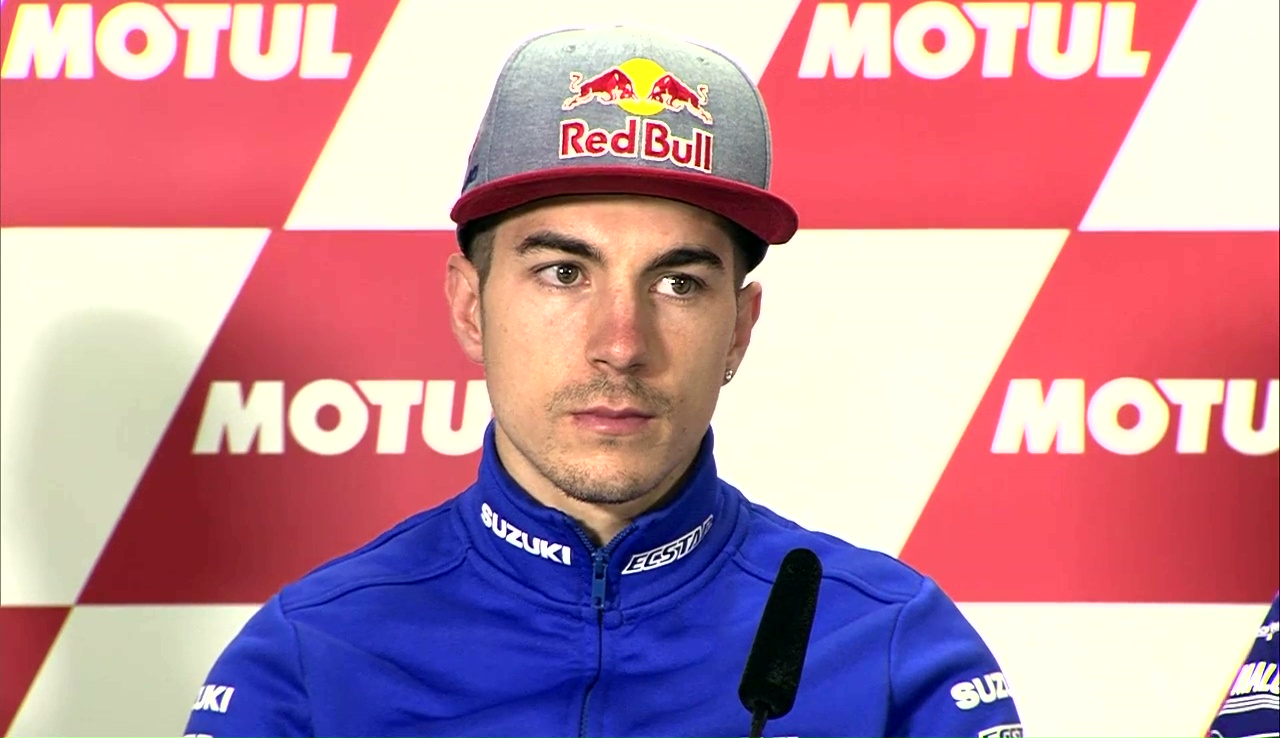 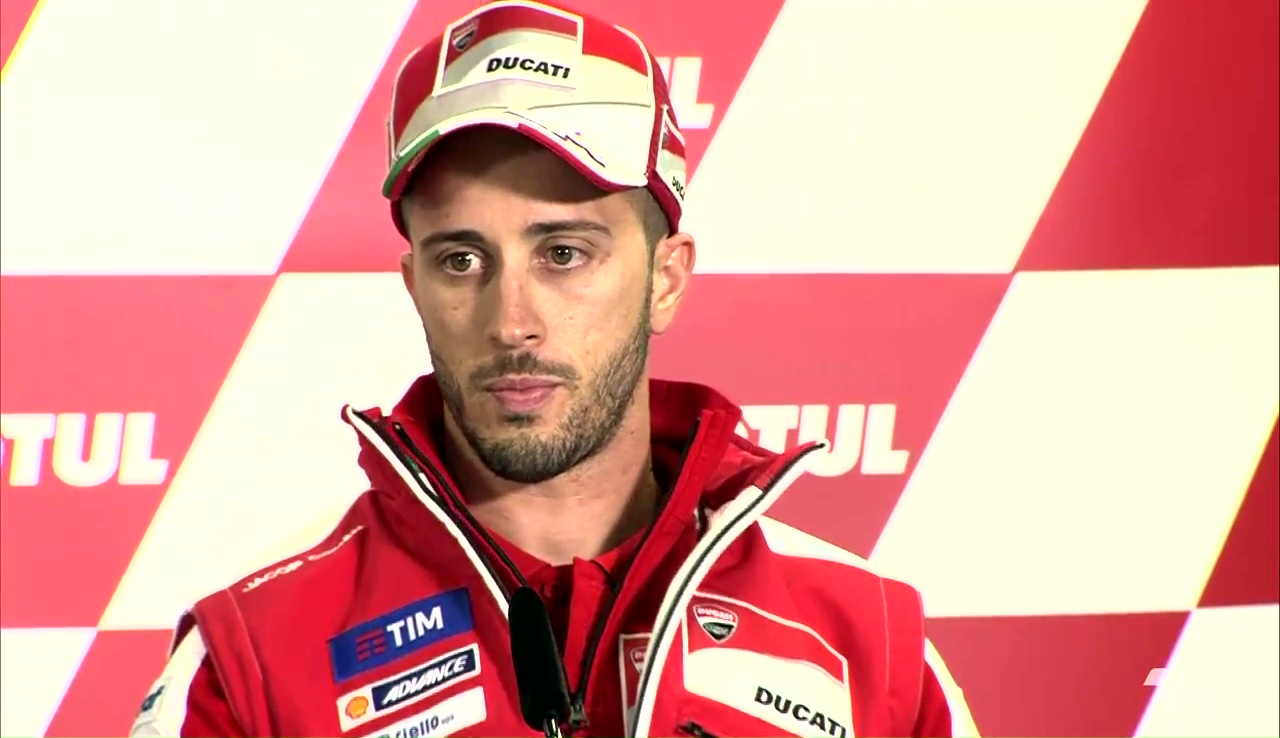 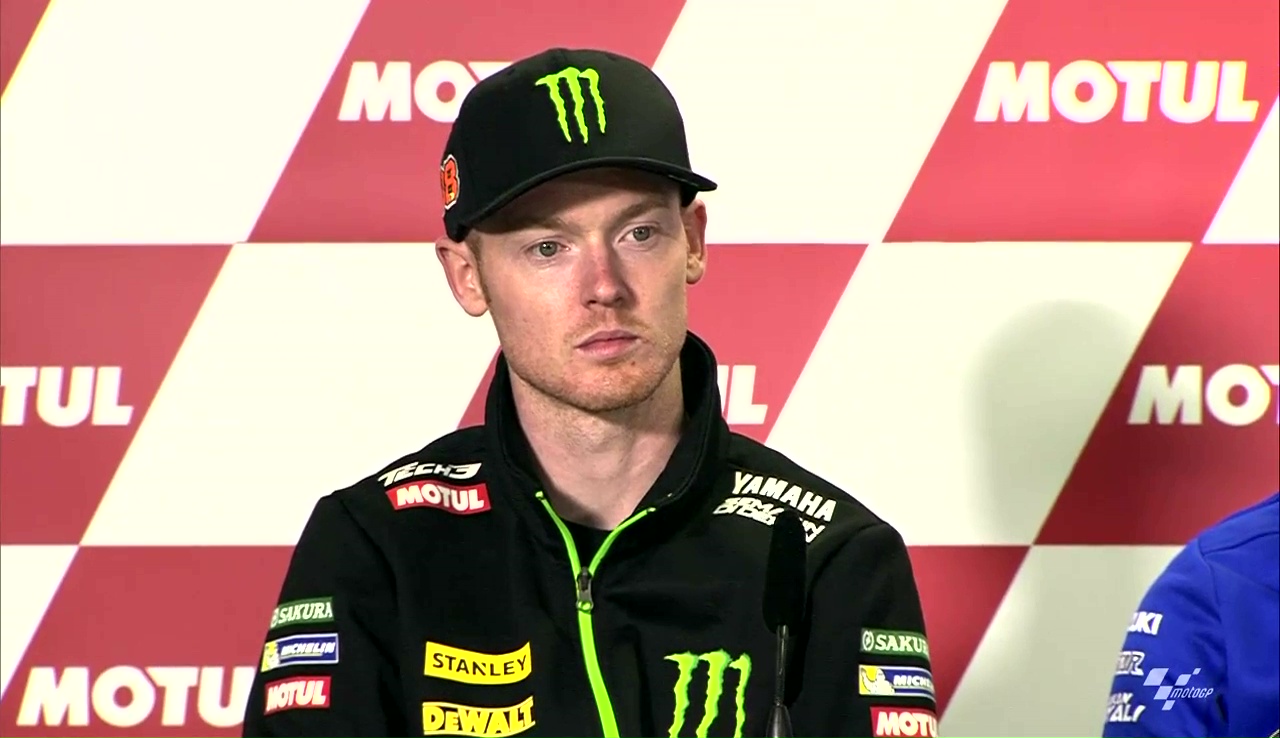