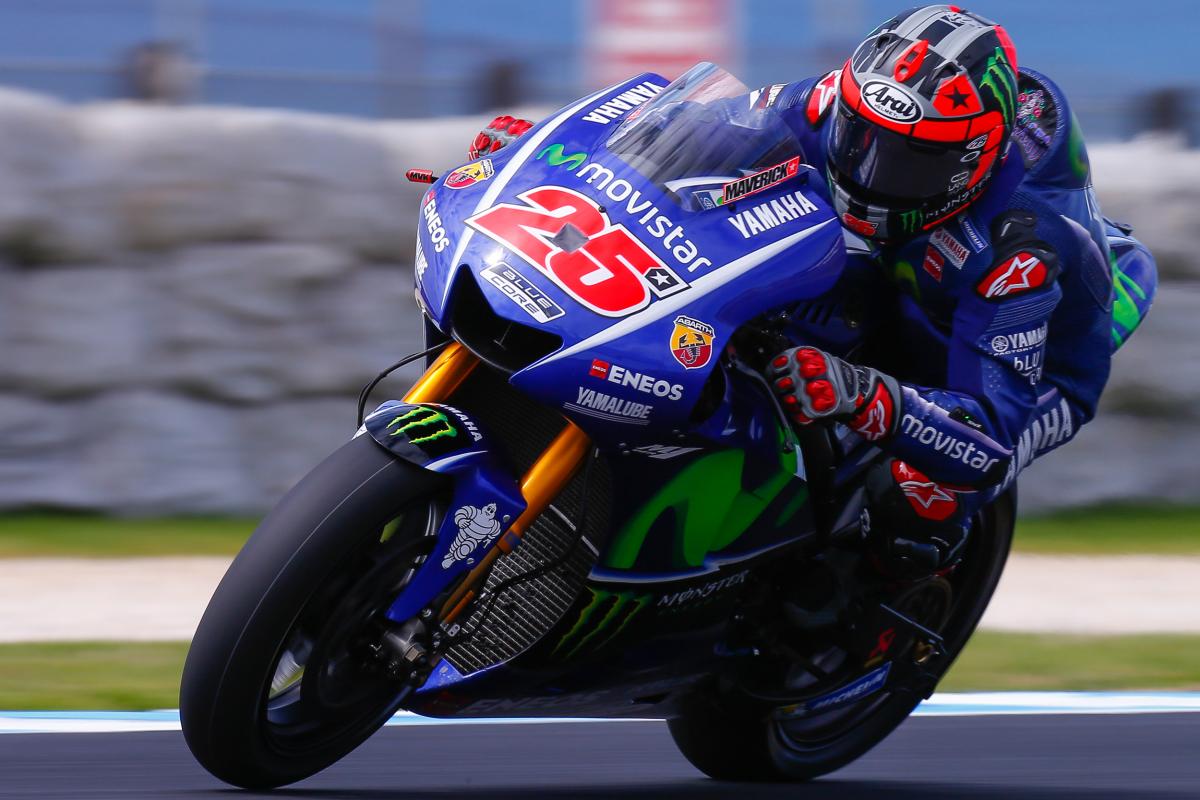 Viñales fastest at Phillip Island: Movistar Yamaha rider once again tops the timesheets to make it a clean sweep of P1 on the pre-season timesheets

New kid on the Yamaha block Maverick Viñales (Movistar Yamaha MotoGP) has done it again at Phillip Island, going even faster on Day 3 to top the timesheets once more. Fastest on Day 2 and fastest during testing at Sepang and Valencia, the Spaniard has hit the ground running in his new MotoGP™ home – ending the Australia test ahead of the Repsol Honda Team: Marc Marquez in second and Dani Pedrosa in third.

Viñales put in a 1:28.549 early in his impressive day’s work; a time unthreatened until the final flag. Completing 101 laps and able to put in 1:28 laps in a row, the Spaniard also managed to rake in the laps in the 1:29 bracket in another ominous show of form. His teammate – nine-time World Champion Valentino Rossi – ended Day 3 in P11 and 0.921s in arrears. The “Doctor” did a best of 1:29.470 in the third session, but is bumped down to P12 on combined times.

The closest chasers to the portentous pace of Viñales were Repsol Honda duo Marc Marquez and Dani Pedrosa. Marquez, who did 107 laps on Day 2 and is the only other rider in the illustrious 1:28 club, did a best of 1:28.843 as he prepares for his title defence – with another impressive 96-lap workload completed. Pedrosa, who was ill on Day 2 and only went out on track for the afternoon, was back on form on Day 3 and put in 65 laps with a quickest effort of 1:29.033, just missing the 1:28s and slotting into P3 on Day 3 and combined timesheets.

The fastest rookie on Days 1 and 2 kept his crown on the third and final day of testing, as Jonas Folger (Monster Yamaha Tech 3) shot up into P4. The German, who did an incredible 1:29.042, also suffered a crash but remained just ahead of 2016 Australian GP winner Cal Crutchlow (LCR Honda). Folger’s teammate, two-time Moto2™ World Champion Johann Zarco, ended the #AusTest P15 on combined times with a 1:29.670.

With Crutchlow locking out the top five, another impressive rookie was hot on the Brit’s tail: Alex Rins (Team Suzuki Ecstar). Beating new teammate Andrea Iannone on the timesheets on Day 2 and repeating the feat on Day 3, Rins put in a 1:29.103 to end up only 0.002 off the number 35 on the combined timesheets – despite a small crash. “Maniac” Iannone ended up P13 overall and twelfth on Day 3, completing 77 laps in the final session with a best of 1:29.547.

Seventh and eighth was a Ducati Team lockout. Andrea Dovizioso and Jorge Lorenzo were separated by less than a tenth, and both completed over 70 laps. “DesmoDovi” is on test duty for the team, with “Spartan” Lorenzo’s focus more angled at adapting to the Desmosedici. The Italian’s best was a 1:29.248, with the Spaniard just behind on a 1:29.342.

ocal hero Jack Miller (Estrella Galicia 0,0 Marc VDS) was the next man up, with the Australian impressing once again after proving a constant force to be reckoned with in the top ten. 2016 Assen GP winner Miller did a best of 1:29.358 to line up just behind five-time World Champion Lorenzo, flying the EG0,0 Marc VDS flag alone at his home track until injured teammate Tito Rabat hopes to get back down to work at the Qatar test.

Aleix Espargaro (Aprilia Racing Team Gresini) was another who impressed, taking P6 on Day 2 and locking out the top ten on combined times. The Spaniard, whose best lap was a 1:29.361, put in 65 laps for the Noale factory on Day 3, with rookie teammate Sam Lowes adding another 57. Lowes’ best was a 1:30.200.

Espargaro’s compatriot Alvaro Bautista (Pull&Bear Aspar Team) was one of the few riders to not improve on Day 3, but his time from the second session is enough to keep him P11 on the combined timesheets – just ahead of Valentino Rossi. Former 125 World Champion Bautista’s best was a 1:29.411.

Octo Pramac Racing’s Danilo Petrucci was the final rider in the top fifteen, taking P14 overall – just ahead of Zarco. The Italian, on the GP17 Desmosedici, did a 1:29.615 to end the Australian test just over a second off the best lap by Viñales.

Red Bull KTM Factory Racing made a huge leap up in laptime on the third and final day at Phillip Island. Both riders Pol Espargaro and Bradley Smith put in laps under the 1:30 barrier, with the Spaniard’s best a 1:29.857 and the Brit’s a 1:29.978. Both within a second and a half of P1, the time sheets bode well for the Austrian factory as the road to Qatar gets shorter.