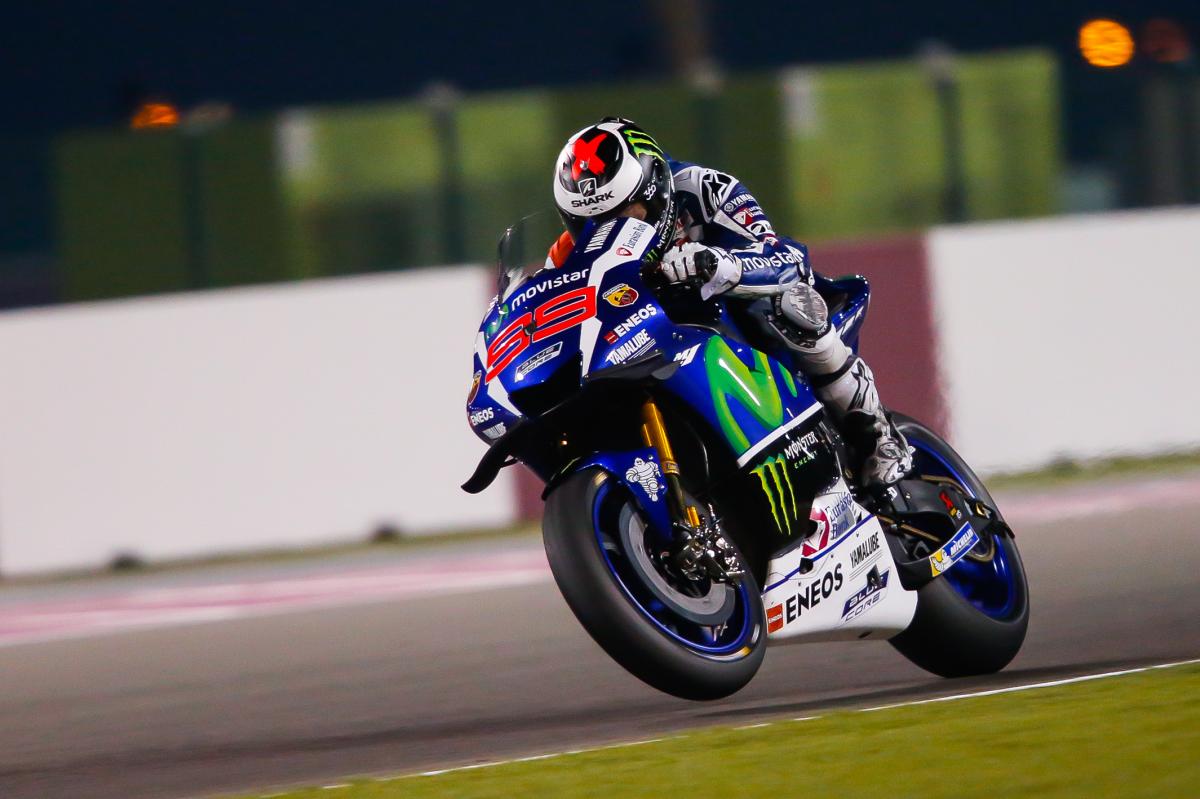 A crash-filled final day in Qatar as the MotoGP™ World Championship conclude their pre-season testing, Lorenzo on top again.

MotoGP™ riders were given one last test session before the 2016 season begins on the 20th of March in Qatar. For many riders it was a difficult final day as they pushed for a fast lap, a number of falls occurring as a result. After a slow start to the session with only Stefan Bradl venturing out in the opening hours, Valentino Rossi suffered his second fall at Turn 10 midway through the session. The Movistar Yamaha MotoGP rider was unhurt and was able to return to his box and resume testing.

Soon after Tito Rabat suffered a fall at Turn 6, the rider unhurt. Later in the evening the Estrella Galicia 0,0 Marc VDS man suffered another fall, again unhurt. Both Aleix Espargaro and Loris Baz fell with over two hours remaining, Espargaro’s a fast off at Turn 3. Neither rider was injured. There were further falls for Hector Barbera and Cal Crutchlow, the latter heading to the Clinca Mobile for checks and was deemed fit.

But it was Jorge Lorenzo who led the field on the final day with a 1’54.810, easily the fastest lap of the test. The current MotoGP™ World Champion was the lone rider down into the 1’54s at the end of the three-day test and over half a second faster than his closest rivals. Not only was Lorenzo’s one lap pace near untouchable, his race simulation was demonic with the majority of laps in the low 1’56s and several in the 1’55s, even towards the end. Few other riders managed a run of 22 consecutive laps, none able to touch Lorenzo’s pace. 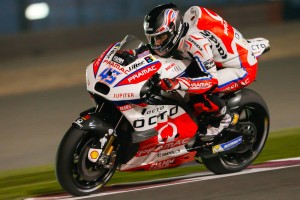 0.516s behind Lorenzo on the second day, and in the overall times, was Scott Redding. The satellite Ducati rider was able to produce a great lap of 1’55.326 aboard his Octo Pramac Yakhnich GP15, the year old machine still proving competitive at the Qatar circuit. Aside from being the leading satellite bike, Redding was also the leading Ducati with a comfortable 0.2s margin over Andrea Iannone at the end of the third day. 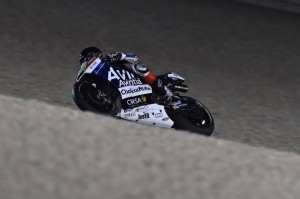 With under half an hour of the test to go, Marc Marquez set his best time of the test with a 1’55.402. As on Thursday, the Repsol Honda Team rider had left the pits early and began to push from the start of the session, suffering a fall at the last corner as a result. After this crash it was a matter of rebuilding his confidence until a final flying lap dragged him to fourth, Honda riders having struggled outside the top five for much of the test.

In fifth on the final day was Valentino Rossi with a 1’55.429 completed on his 36th lap of 55. All of the top five were able to go faster than Viñales’ best time from Thursday. The Qatar Test has seen Rossi focus on gathering data, putting in a total of 144 laps across the three days in the desert. Frustratingly once again Rossi was over half a second behind his teammate, though no doubt his hard work testing settings will assist him in the long run.

Sixth on both the final day and overall, Andrea Iannone was one of only a handful of riders who did not improve their time on the final day. The Italian’s 1’55.508 stood as his best single lap of the test, but like Lorenzo he turned his attention to a longer run on the final day. 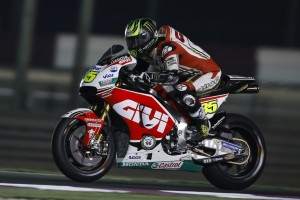 Under a tenth back on Iannone was Cal Crutchlow who was able to improve his Thursday best time by over half a second to end the day and concluded the test in seventh. With Dani Pedrosa again having a difficult time on the factory bike, Crutchlow was the second fastest Honda rider. Crutchlow was 0.108s ahead of Andrea Dovizioso who set his fastest lap on lap 47, his last lap of testing.

Suffering two falls on the final day, Hector Barbera still managed to end as the fourth fastest Ducati in ninth with a 1’55.733. The Spaniard was only able to manage 23 laps on the closing day. After three successful tests, Barbera heads into the first round of the championship confident of battling for the top ten. All of the top nine were within a second of Lorenzo’s lap.

After a difficult pre-season, Dani Pedrosa concluded the final test as the tenth fastest rider due to his 1’55.857 from Thursday. The Repsol Honda rider was visibly frustrated when talking to the media after the Qatar Test and will need a significant change of fortune before the season starts.

Pol Espargaro ended the test in 11th and ahead of teammate Bradley Smith. Espargaro was just 0.025s behind a finish inside the top ten. 0.012s back on Espargaro was Yonny Hernandez in 12th. After an initially difficult start, the Colombian has found his feet with the Aspar MotoGP Team and was able to finish ahead of Bradley Smith.

Smith, who had been saving his tyres for the final day, completed 62 laps. This was just one lap less than Michele Pirro and the most of any full time Grand Prix rider. Unfortunately Smith was not able to get above 13th place but having consistently done the most laps of any rider across all three tests, the Brit has ample data to work with. Friday also saw Smith test a set of winglets on his satellite Yamaha.

Loris Baz ended the test in 14th and ahead of Aleix Espargaro on the Suzuki, Espargaro was once again unable to match the pace of his teammate. 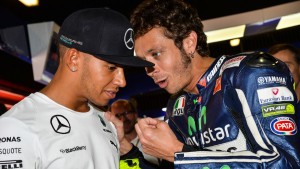 It was a strong day for Michele Pirro, replacing the injured Danilo Petrucci, after his crash on Thursday as the Ducati test rider managed 16th and completed a staggering 63 laps. Pirro’s time was 0.436s better than the best of Tito Rabat, who leaves Qatar as the 17th fastest rider.

Alvaro Bautista continued to progress well on the Aprilia, just 2.233s back on Lorenzo’s best time and ahead of Australia’s Jack Miller in 19th. Eugene Laverty ended the test in 20th, now feeling much more at ease with his GP14.2. Stefan Bradl was the last of the full time MotoGP™ riders, ending ahead of Hiroshi Aoyama and Takuya Tsuda.

The MotoGP™ World Championship now have several days off before practice for the first Grand Prix of the year begins on the 17th of March. 2016 is almost here and with four different manufacturers in the top four, it looks set to be another incredible season. 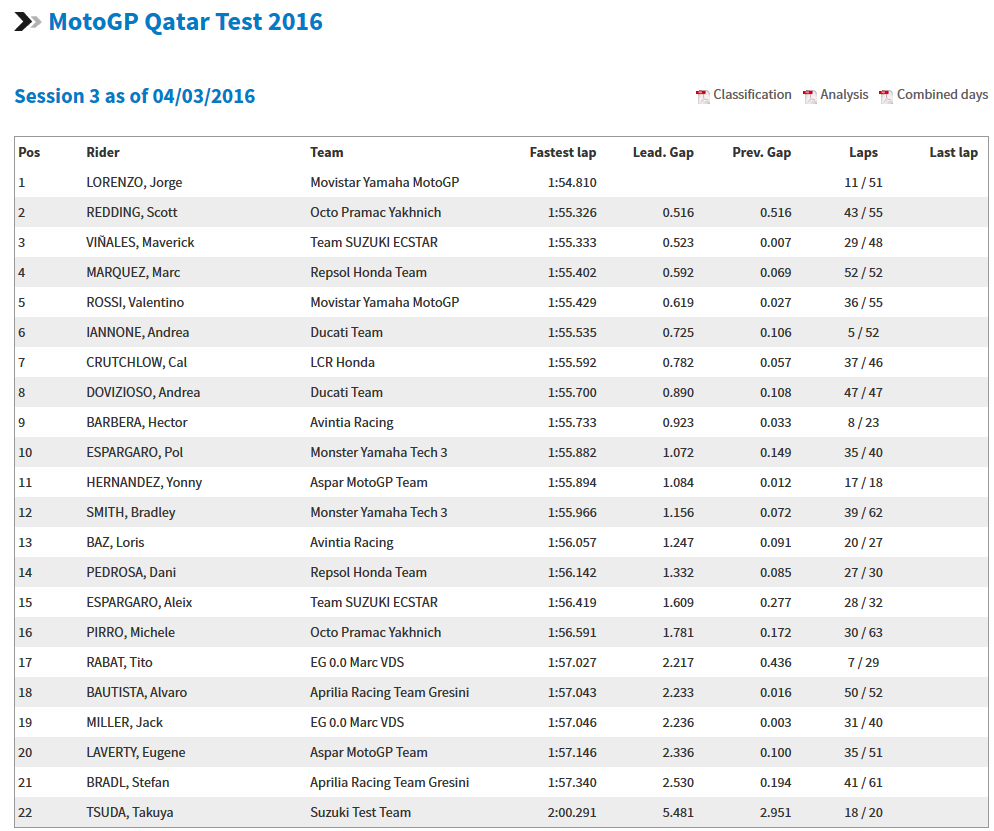