Qatar Day 2: Viñales take it back… 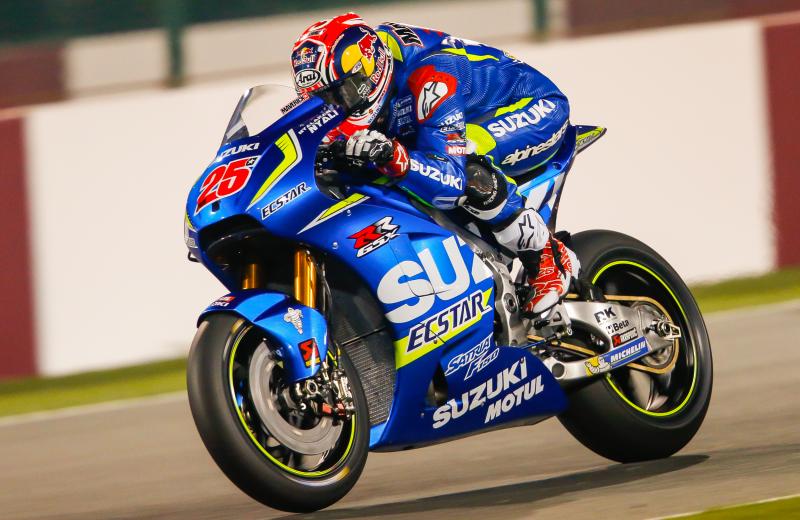 The second day of testing in Qatar sees three manufacturers split by under 0.1s at the top with Viñales back to his best.

Once again it was Hiroshi Aoyama and Michele Pirro who were the first out of the pits at the Qatar Test, the rest of the field beginning to slowly trickle out of the pits some hours later when track conditions improved. Valentino Rossi was the first full-time Grand Prix rider out on track, but quickly returned to his box after an exploratory run.

A fall for Michele Pirro, who is replacing the injured Danilo Petrucci for the Qatar Test, left the Octo Pramac Yakhnich team with substantial work to do repairing his damaged GP15. Fortunately Pirro escaped injury and completed a total of 21 laps.

After his exploratory run, Rossi seized control of the time sheets during the early stages of the second day, Marc Marquez and Jorge Lorenzo then battling it out for the top spot as the halfway point of the test approached. Ducati continued to show well with all their bikes, Andrea Iannone, Hector Barbera and Scott Redding close to the top five throughout the day.

Aside from their own testing plans, the MotoGP™ World Championship riders were also tasked with testing new tyre options brought to the Losail International Circuit by Michelin. Many riders were also able to do race runs, Jorge Lorenzo, Andrea Dovizioso and Loris Baz all putting in their longest consecutive runs of the test so far. 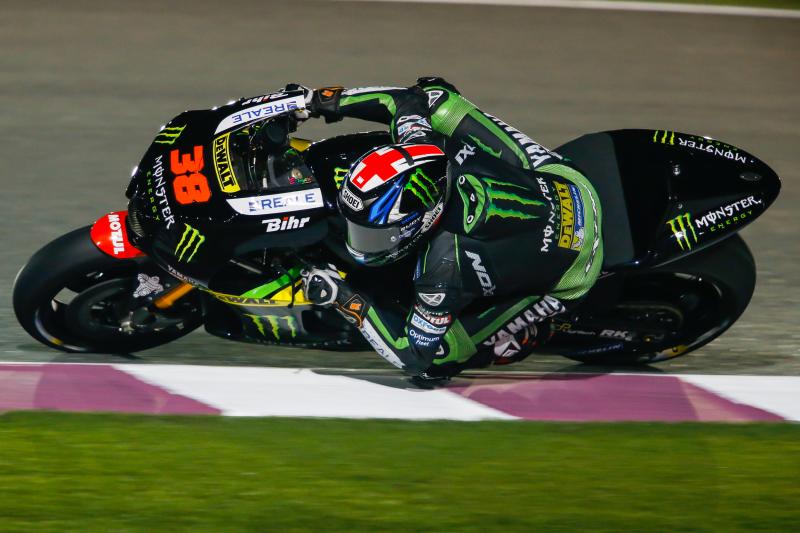 There was a flurry of activity with under three hours to go as Maverick Viñales set a 1’55.436 to top the second day of testing. This was also the fastest lap of the test so far; proving his pace in Phillip Island was no fluke.

Andrea Iannone continued his run as the top Ducati rider with a 1’55.508, a minuscule 0.072s back on Viñales’ fastest time. The Ducati Team rider completed 41 laps as he once more focused on smaller runs of five or six laps, continually making adjustments to his 2016 Desmosedici GP.

It was a ferociously tight top three as Jorge Lorenzo made it three different manufacturers within 0.1s at the top, the triple MotoGP™ World Champion setting a 1’55.535 to end 0.099s behind Viñales on the second day. This time was 0.1s back on his best time from Wednesday, the Movistar Yamaha MotoGP man second on combined times across the two days with Iannone behind in third. 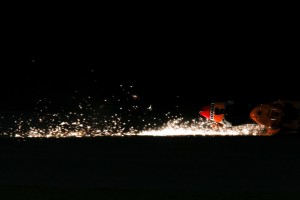 Scott Redding and Hector Barbera were once again inside the top five with both riders getting into the 1’55s for the first time at the test. Just over 0.1s back on the factory Ducati of Iannone, Redding is feeling confident on the GP15, finding his confidence again after a difficult year with Honda in 2015. Meanwhile Hector Barbera completed a 14 lap run on his Avintia Ducati, attempting to further his understanding of how the bike will change over race distance.

With Andrea Dovizioso in sixth, Ducati riders are clearly going well at the Qatar circuit, the kilometre long straight playing to Ducati’s famously strong engine. As with Lorenzo and Barbera, Dovizioso’s focus was on longer runs throughout the second day.

Seventh on day two 0.421s back on Viñales, it was another difficult day for Dani Pedrosa and all the Honda riders. Qatar has been a difficult track for Honda in recent years and this does not look to have changed. Pedrosa did manage to finish ahead of Valentino Rossi, the Movistar Yamaha MotoGP rider in eighth on the second day and almost half a second behind his teammate once again. 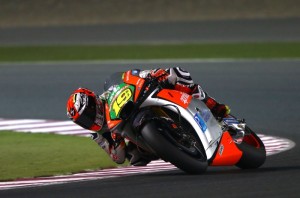 Marc Marquez made an explosive start to the test, almost immediately improving his best time by half a second during his opening laps. Unfortunately a fast crash at Turn 1 dented his confidence and saw him unable to improve his time. His 1’56.046 was an improvement of half a second over Wednesday, but saw ninth on the second day and ninth overall.

Completing the top ten was Aleix Espargaro who was able to sample the fully seamless gearbox on his Team Suzuki Ecstar machine for the first time. This was mostly a shakedown test and to ensure that the gearbox is reliable as he and the team aim to implement it for the first race.

As on the first day, Monster Yamaha Tech 3’s Pol Espargaro was directly behind his brother in the standings, ending 11th and a meagre 0.047s slower than his brother’s Suzuki.

It was another strong day for Loris Baz who ended the day in 12th and within a second of Viñales’ best time while performing a longer run alongside his teammate Hector Barbera. 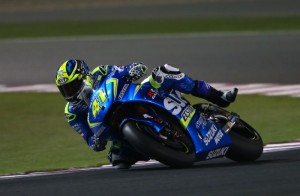 the Wednesday. The LCR Honda rider managed 50 laps on the second day, the third most of any rider.

Yonny Hernandez led Tito Rabat as the pair rounded out the top 15. Both still have significant work to do ahead of the season curtain raiser on the 20th of March.

With just 14 laps complete it was a quiet day for Bradley Smith who chose to save his limited tyres for several longer runs on Friday. Eugene Laverty was 0.403s back on the Brit as the Irish rider continues his adaptation to the GP14.2, injury upsetting his early testing in Sepang.

Having only recently revealed their new bike, both Alvaro Bautista and Stefan Bradl continue to work well within the limits of the engine, Aprilia still uncertain of the reliability. Bautista ended the day 18th with Stefan Bradl down in 22nd. 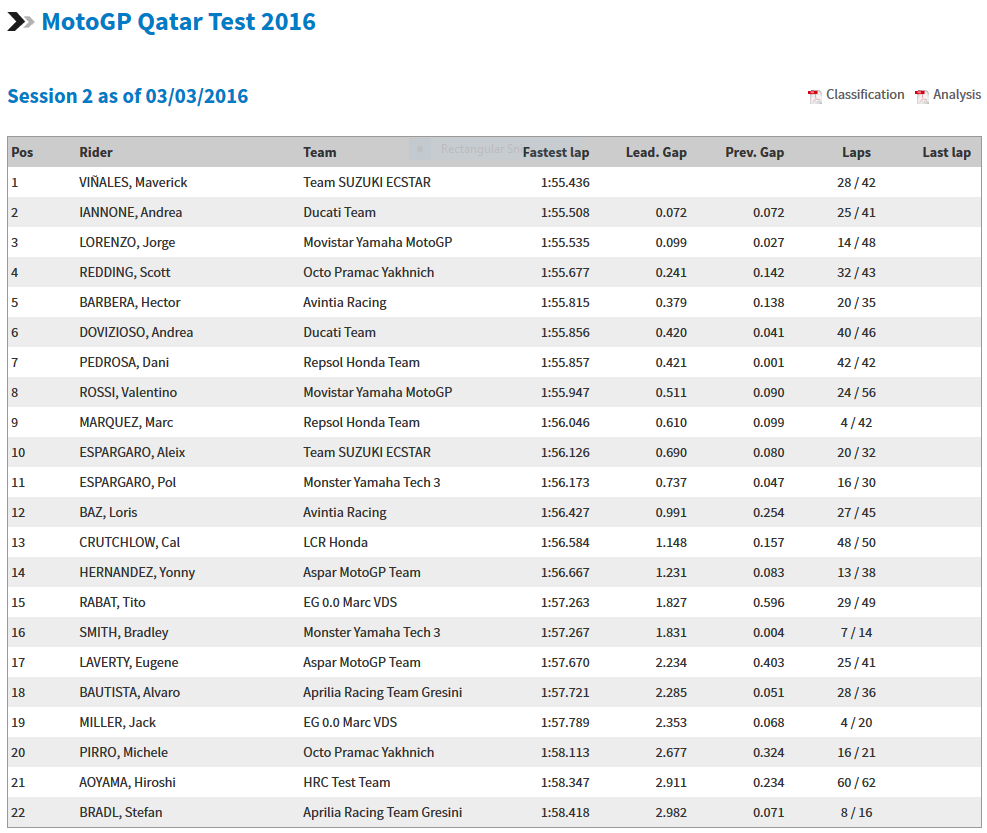