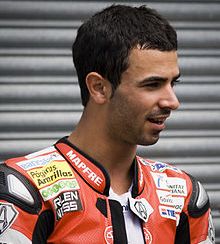 Mike Di Meglio (born 17 January 1988) is a French Grand Prix motorcycle road racer and 2008 world champion in the 125cc class. Of Italian descent, his paternal grandfather was born in Lentini (Province of Siracusa).

Di Meglio first came to the attention of the Fédération Française de Motocyclisme (French Motorcycle Federation) 2002 Prix de l'Avenir. He also took a trial with the Liegois team in Carole, with whom he took part in a Spanish Championship race. Later he raced at world championship level in 2003.

Di Meglio was born in Toulouse.
2003, Debut with Aprilia, switch to Honda later

When Di Meglio turned 15 years old, he decided to accept offers by the Italian Freesoul Racing Team on Aprilia to debut in the 125cc world championship in 2003. Although he managed to score points, including 13th place at Catalunya, it was a difficult season for him, crashing often and not achieving good results. Later, at the mid-season, he was offered by the Italian MetaSystem Rg Service to replace Italian veteran Andrea Ballerini, but this time the team was on Honda, he tried to attempt to achieve his goals, but he failed to improve and didn't score any championship points.
2004, Ride with Globet.com, first front-row start and first top five finish 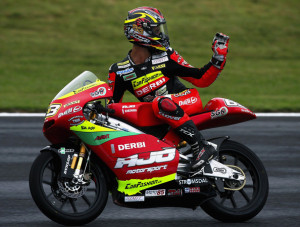 After a disappointing 2003, Di Meglio vowed to salvage a wrecked debut. He signed with Globet.com Racing on Aprilia alongside Gino Borsoi for the 2004 Grand Prix motorcycle racing season. The start was promising with a front-row start and a fifth-place finish at South Africa, but he failed to be consistent due to several crashes.
2005, Ride with Team Scot, first podium and first win

Di Meglio stayed with the same team for 2005, but his team joined forces with Team Scot which runs on Honda machinery, the same team that helped Andrea Dovizioso win the 2004 125cc World Championship. Di Meglio was their official rider on board on a factory Honda RS125RW along with Fabrizio Lai but it was under the Kopron Racing World name. His performance improved, scoring points regularly. He performed heroically at the French Grand Prix by fighting for a podium position, finishing fourth and making his home fans happy and entertained. However, it was his podium finish in the wet British Grand Prix by finishing second place behind Julián Simón, which gave him a reputation as a wet weather expert. He also finished a credible fourth place in the hot Qatar Grand Prix ahead of future 125cc champion Thomas Luthi. The high point of the season for the Frenchman was his controversial win at the Turkish Grand Prix, when Mika Kallio crashed and race leader Luthi had run wide to avoid him.
2006, Ride with FFM Honda GP 125cc. Disaster strikes

He joined the Fédération Française de Motocyclisme's world championship team run by Alain Bronec for 2006. The FFM Honda GP 125 team also provided him with a factory bike just like the previous season, but despite his big ambitions & a factory bike, he suffered an injury, & a huge blow, just scoring only four races that resulted into eight points only. He left the team immediately for Team Scot the following year after Portugal as the result of his performance with the team.
2007, Return to Team Scot. Master of wet races

For 2007, Di Meglio returned to Team Scot, the team that had helped him win his first Grand Prix in 2005. He was teamed with the young Italian Stefano Musco. In the first few races, he managed to score championship points. He had a very bad crash during the qualifying session of the Spanish Grand Prix, breaking his collarbone and was forced to miss the Turkish Grand Prix as a result. He returned in China to a fourteenth-place finish and followed that with a ninth place at Le Mans. A front row start at Mugello did not come to much either as he crashed out on the third lap of the race. After this, several disappointing race results followed except in the wet race at Donington, where he finished in sixth place and in Japan, where he finished fourth despite crashing out of second place while chasing race leader Mattia Pasini.
2008, Ride with Ajo Motorsport and maiden world title

For 2008, he was offered to ride with the Finnish Ajo Motorsport, teamed with Dominique Aegerter. He returned to Aprilia machines, but officially rides for Aprilia's sister Piaggio company, Derbi. He is riding the Derbi RSA 125 factory bike. His campaign started slowly within Qatar finishing in fourth, beaten to the podium at the line by Stefan Bradl. In Spain and Portugal, Di Meglio picked up minor points and trailed title contender Simone Corsi, but starting in China, Corsi's pace started to slip away including a crash from a minor incident with Lorenzo Zanetti and reigning world champion Gábor Talmácsi struggling that allow Di Meglio to take full advantage. A win in the shortened French Grand Prix started a consistent run lasting until at San Marino where he crashed out while fighting for third place with Corsi. At the Australian Grand Prix, Di Meglio became the only second Frenchman to win the world championship after Arnaud Vincent.
2009, Move to 250cc Class with Mapfre Aspar Team

For 2009, he moved up to the 250cc class with the Aspar Racing Team, alongside Álvaro Bautista. In his debut race in Qatar he qualified third but dropped back to 11th on lap 1, before fighting back. He ran fifth in the later stages, but aggressively passed Bautista on the final lap before passing Raffaele de Rosa for third. He did not take another top five finish until round ten at Donington, but hit form from this point on. He took pole at Indianapolis, and claimed second place at Estoril in a photo-finish with Héctor Barberá. He was fighting for top rookie honours with de Rosa but lost out to him as a result of crashing out in Valencia while de Rosa finished third.
2010, Ride in Moto2 still with Mapfre Aspar Team 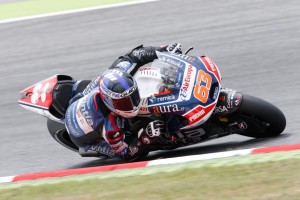 The 2010 saw the debut of the Moto2 class as the new intermediate class of Grand Prix racing, replacing the 250cc class. Di Meglio failed to take full advantage of it, with several poor race finishes in the first three races of the season and a crash at Mugello. Di Meglio took his first points-scoring finishes at British and Dutch rounds with seventh & eighth respectively. Despite his good results at those rounds, he failed to be competitive again until Australia where he finished in sixth place, having started on the front row.