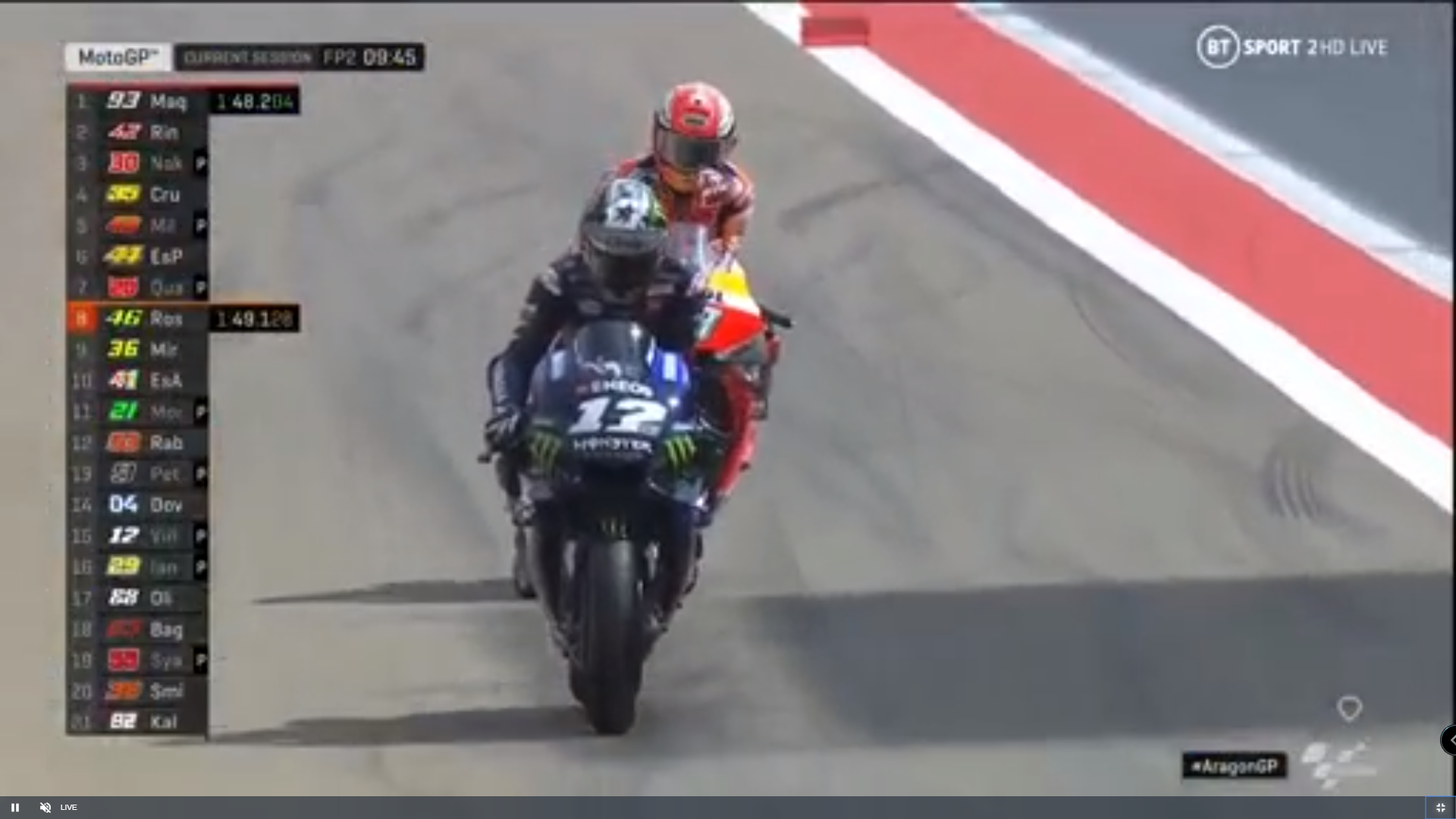 A Yamaha's Job... Yamaha covers the Top 3 Spots in FP2 with Maverick Viñales, Valentino Rossi and Fabio Quartararo. Marc Marquez sit 4th and the excellent Aleix Espargaro put the Aprilia in Top 10 only .69 second behind... Top 13 riders within 1 Second...

But even if Yamaha trio top FP2, Marquez remains the man to beat... Viñales leads the way from Rossi, Quartararo on Friday afternoon but it’s a Repsol Honda who sits over a second clear in Aragon.

Marc Marquez’ (Repsol Honda Team) incredible 1:46.869 in FP1 sees the reigning World Champion sit over a second clear of the field on Day 1 at the Gran Premio Michelin® de Aragon. Maverick Viñales was fastest from Monster Energy Yamaha MotoGP teammate Valentino Rossi in FP2 as the duo sit inside the top three on the combined standings.

With rain threatening on Saturday, Marquez’ tactic was clear: get the work done in FP1 to get yourself into Q2, before focusing on race setup in the afternoon. Leading into the afternoon session Marquez had a 1.6 second advantage over Viñales, but it was Alex Rins (Team Suzuki Ecstar) and Jack Miller (Pramac Racing) who were the ones improving their time early in FP2. However, neither could get close to Marquez’ time but it wouldn’t be the perfect day for the number 93. An unscathed crash at Turn 8 may have dampened the Championship leader’s spirits slightly, but even when the soft tyres were put in by his competitors at the end of FP2, no one would finish within a second.

In the battle to be best of the rest, Viñales held the baton. A good run of laps in the latter stages saw the Yamaha man chip away nicely at Marquez’ advantage. Riders such as Joan Mir (Team Suzuki Ecstar) were threatening the top five, with LCR Honda Castrol’s Cal Crutchlow and Pol Esparagro (Red Bull KTM Factory Racing) jumping up to fourth and fifth respectively in the last five minutes, before Miller then shot himself back up the timing screens to P4 on the combined times.

With just two minutes to go, Rossi needed a hot lap to get inside the top 10. ‘The Doctor’ seemingly struggled in FP1 to sit P17 but the nine-time World Champion pulled a good lap time out of the bag to launch himself to P3, less than a tenth off his teammate. Fellow Yamaha rider Fabio Quartararo (Petronas Yamaha SRT) then found himself on the fringes of the top 10, but the Frenchman – ever-impressive on a fresh set of soft Michelin rubber – was able to go from P10 to P4. Andrea Dovizioso (Ducati Team) then improved to P8 from P10 after finishing FP1 fourth before Aleix Espargaro (Aprilia Racing Team Gresini) produced a personal best last lap to claim P10 at the expense of Rins. 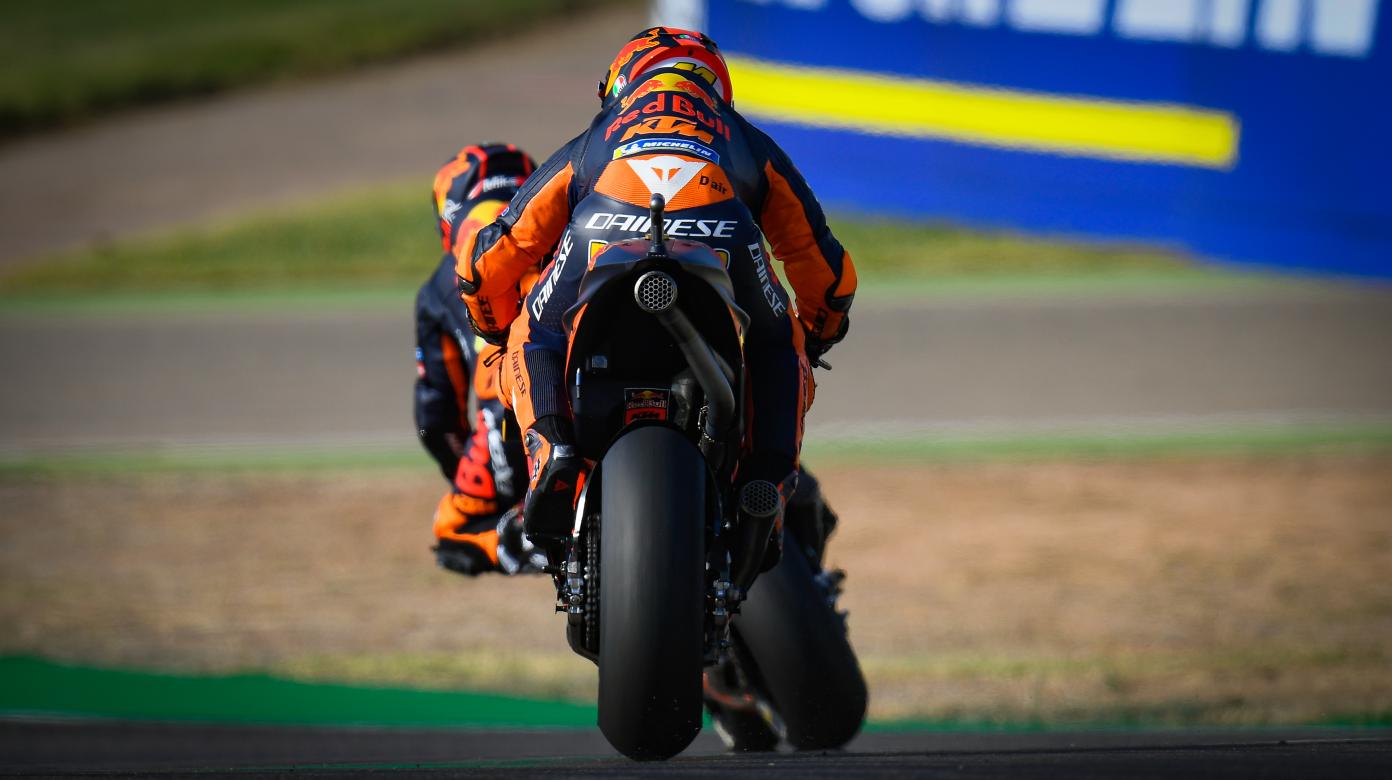 So at the end of FP2 it was Viñales leading from Rossi and Quartararo, but Marquez FP1 time sees the Spaniard storm into Saturday as the clear leader – 1.145 his advantage. Behind the trio of Yamahas was Pol Espargaro in P5 as the Spaniard enjoys another good day at the office having finished FP1 in P8, he leads sixth place Miller by 0.050. The Australian slips a place after claiming P5 in FP1 as Crutchlow is able to leap from P15 in FP1 to P7 at the end of the day.

Dovizioso cements a top 10 with that late lap to sit just over a tenth clear of Mir, the Spanish rookie convincingly beating teammate Rins in both FP1 and FP2. Aleix Espargaro’s aforementioned final lap means the home rider climbs two places in the afternoon session from his P12 in FP1.

Can anyone stop Marquez ahead of qualifying? Potential wet weather awaits the riders on Saturday, so if it arrives during the morning, the top 10 could be set for Q2. 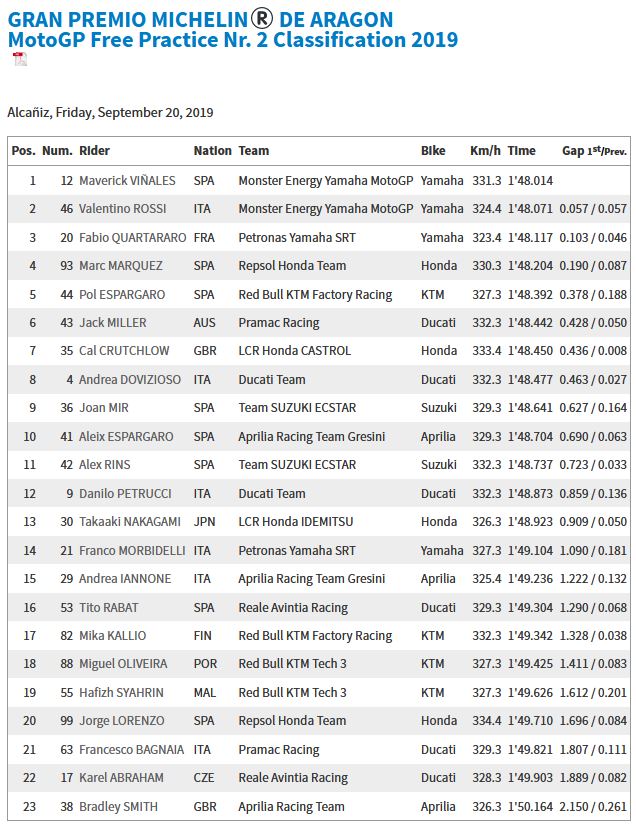