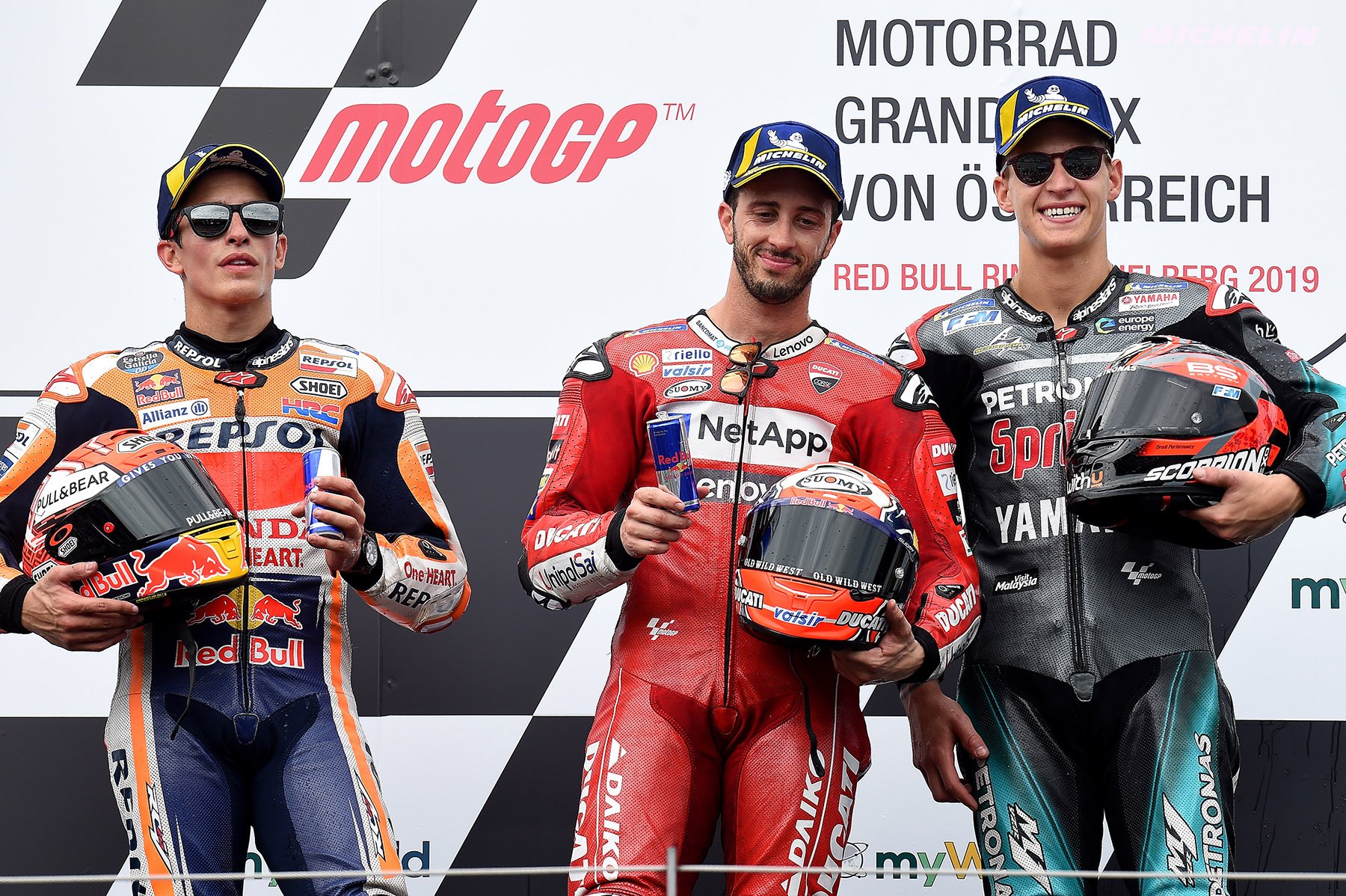 If You've got last two years footages of that race, watch them again; and you have seen the 2019 Austrian Red Bull Ring Grand Prix. Despite our thoughts that Yamaha will join the feast; Fabio Quartararo and Valentino Rossi never threatened the Ducati-Honda tandem in front...

Polesitter Marquez was lightning off the start, and so was Dovizioso. The two race favourites headed into Turn 1 in first and second as Jack Miller (Pramac Racing) got in slightly hot, almost clipping Dovizioso. Marquez and Dovizioso were incredibly close heading down the straight into Turn 3 as the two made slight contact at around 300km/h. Marquez had the inside line, Dovi on the outside as the two fought for first. Marquez was in hot though and ran wide, with Dovi having to sit his GP19 up. This allowed Quartararo to sweep through to the lead, with Miller and Team Suzuki Ecstar’s Alex Rins getting by Marquez and Dovizioso on the exit, with the Repsol Honda rider lucky to stay on as tried to control his wheelie. 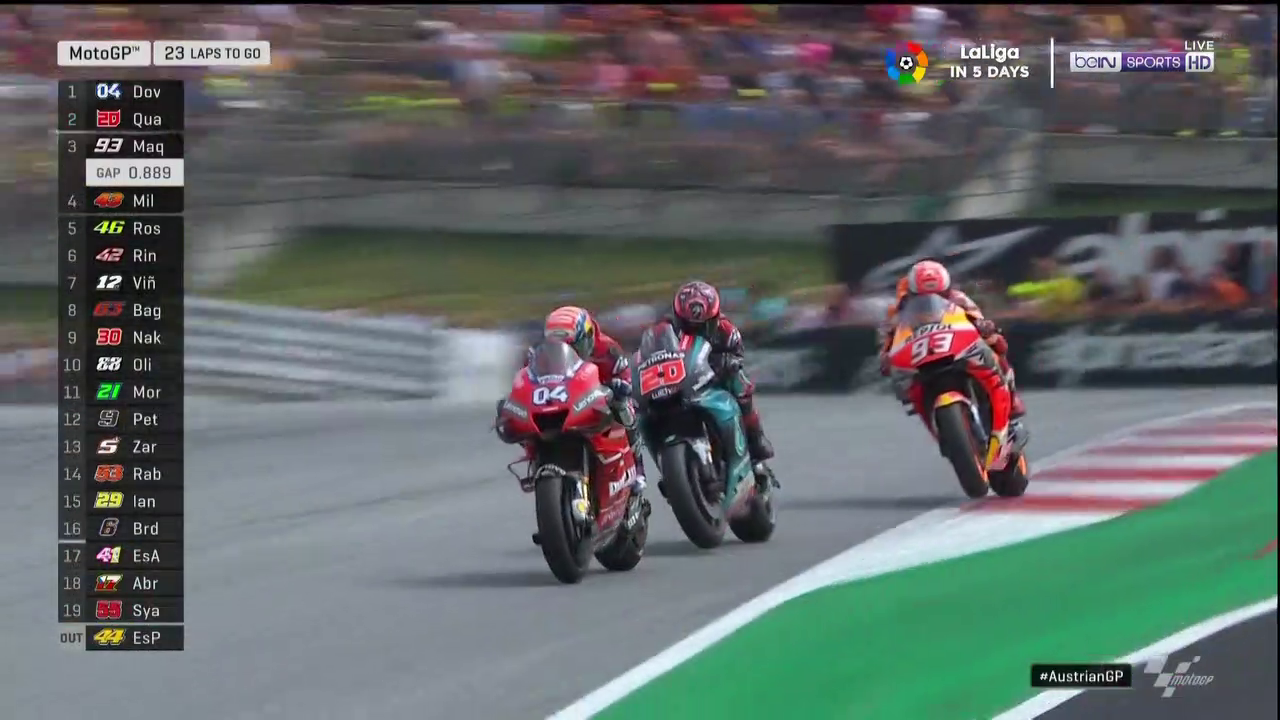 Dovi then got by Marquez into Turn 4 on the opening lap as the polesitter was demoted to P5. Meanwhile, Quartararo was getting the hammer down as the rookie took a 0.5 lead onto Lap 2, but Dovizioso and Marquez started to make up ground as they recovered from a frantic opening lap. Dovi was back up to second, with Miller holding off Marquez for the time being in third and fourth. Just behind was the fast-starting Valentino Rossi (Monster Energy Yamaha MotoGP), ‘The Doctor’ climbing his way up to fifth from P10 in the opening exchanges to be in the battle for the podium.

It wasn’t long before Marquez had dispatched Miller as the top three started to edge away from the Pramac man, Rossi and Rins. On Lap 7, Quartararo was like a sitting duck heading into Turn 1 as Dovizioso used the Ducati grunt to blast into the lead. Moments later, Marquez did the same on his Honda. There was nothing Quartararo could do about the Yamaha’s lack of acceleration as he slipped down to third. Now, Dovizioso and Marquez were sitting first and second.

Was Dovizioso then slowing the pace down? It was hard to tell but the top five found themselves split by just 1.3 seconds, as the race would then end prematurely for fourth-placed Miller. The Australian slid out at Turn 9 on Lap 8 and just ahead of him, Marquez was through at the final corner. Then the duo started to pull clear. Not by a massive amount each lap, but Quartararo couldn’t match the pace of the Ducati and Honda as we set ourselves up for another almighty Austrian battle between the two leading contenders in the MotoGP™ World Championship.

Marquez threatened to stretch away but the gap didn’t rise above 0.4 seconds. It was clear the first half of the lap belonged to Marquez, but Dovizioso was the stronger man in the second part. The laps ticked by and there was nothing between them, Dovizioso attached to the back of Marquez coattails. With nine to go: a move was made. Dovizioso powered alongside Marquez as the number 93 had a quick glare at the Italian heading into Turn 1. The Ducati man made the pass stick and it was now the 2017 Austrian GP winner who had control.

Tensions were bubbling to boiling point as for the next five laps, Marquez trailed Dovi by 0.1, 0.2. Shadowing his great rival, where would Marquez choose to pounce? With three to go, we found out. Turn 7 was the unlikely location as Marquez stuck it underneath Dovizioso to regain the baton, was it the race-winning move? Serious questions were being asked of Dovizioso, but he was answering them. Marquez wasn’t pulling clear and heading into Turn 1 on the penultimate lap, Dovi went for it. Would he make it stick? Not quite, Dovi ran wide to allow Marquez to power back past.

Onto the last then and there was nothing separating the leaders. Marquez had a half a bike lengths lead as the duo got so close heading into Turn 1. Again, Dovi went for it but ran wide, so it was Marquez who led going down into Turn 3. Dovi was close but not close enough as Marquez led the Ducati around the final lap, was the Ducati stranglehold on the Red Bull Ring about to be broken? A breathless battle came down to the last sector. Dovi powered up the hill out of Turn 8 – he was close. No pass came at Turn 9 but then, Dovi pulled out from behind Marquez heading into the last corner. It was roles reversed from 2017 as Dovi lunged down the inside, and he got it stopped! Dovi stood the Ducati up and there was nothing Marquez could do, Ducati and Dovi were in dreamland as Marquez’ quest to win the Austrian GP ended. A scintillating scrap came to a close in the most extraordinary circumstances.

Further back, Rossi had been caught by teammate Maverick Viñales and Rins as the trio battled for fourth. Ahead of them, Quartararo took the chequered flag in a lonely third to claim his third MotoGP™ rostrum, with Rossi holding off Viñales as three Yamahas sat in the top five at a track that has never suited the YZR-M1. Rins was 0.021 off Viñales in sixth as two rookies picked up their best premier class results behind. Francesco Bagnaia (Pramac Racing) pocketed P7 to finish as the second-best Ducati, while Miguel Oliveira (Red Bull KTM Tech 3) finished as the best KTM on the Austrian factory’s home turf – a sensational P8 for the Portuguese rider. Danilo Petrucci (Ducati Team) will be disappointed with P9 on a Ducati-friendly circuit, compatriot Franco Morbidelli (Petronas Yamaha SRT) completed the top 10.

Cal Crutchlow (LCR Honda Castrol) crashed out of contention on Lap 2 at Turn 3. The British rider hit the back of Tito Rabat’s Reale Avinita Racing Ducati after the Spaniard had to take avoiding action due to Pol Espargaro’s (Red Bull KTM Factory Racing) bike cut out. Not the result KTM would have been looking for on home turf.

The 2019 Austrian GP will live long in the memory. Another breathtaking Dovizioso vs Marquez battle goes down to the final corner, and it’s Ducati who emerge victorious again. Sensational scenes as Spielberg delivers again.

P10 to P4: Rossi "not so far" from unlikely Austrian podium. ‘The Doctor’ had a competitive weekend at the Red Bull Ring as he and Yamaha show drastic improvements from this time last year

It was a positive Sunday afternoon for Valentino Rossi (Monster Energy Yamaha MotoGP) at the myWorld Motorrad Grand Prix von Österreich as the nine-time World Champion secured P4, having started the race from P10.

Compared to this time last year, Rossi and Yamaha’s fortunes have drastically improved. Iwata factory bosses came out and publicly apologised to Rossi and teammate Maverick Viñales for the bike’s poor performance. However, a fourth-place for ‘The Doctor’, with Fabio Quartararo (Petronas Yamaha SRT) taking P3 and Viñales P5, means Yamaha have had a successful Austrian GP weekend with three bikes inside the top five.

Quartararo: "I made no mistakes". Podium number three of the year was tallied by the Frenchman on Sunday in Austria, who now leads the Independent Team Rider’s standings

Fabio Quartararo’s (Petronas Yamaha SRT) season continues to go from strength to strength. On a track that typically doesn’t favour the YZR-M1, the rookie sensation was able to claim Yamaha’s second podium at the Red Bull Ring after taking the chequered flag in P3 in Sunday’s myWorld Motorrad Grand Prix von Österreich.