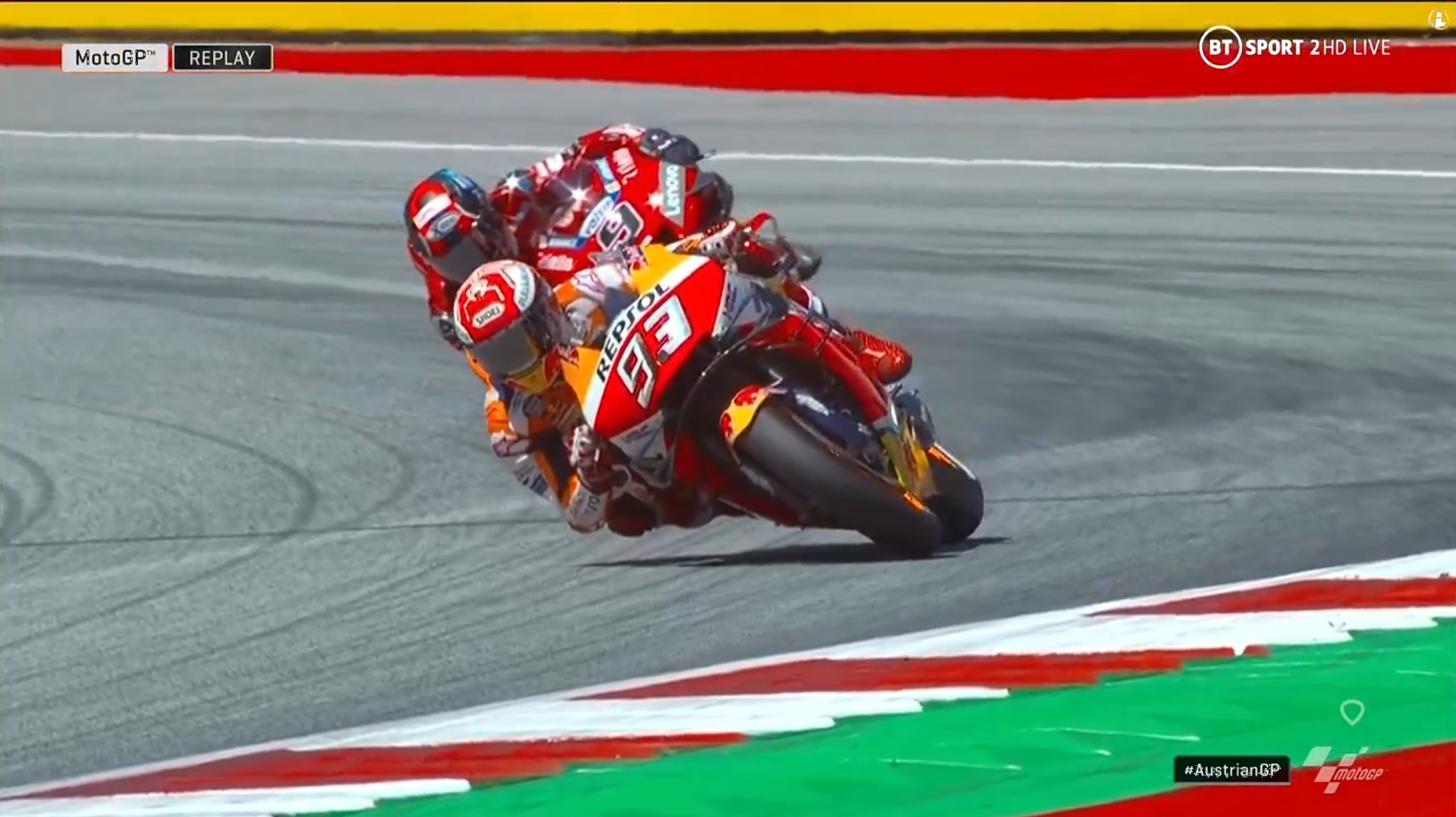 Less than a tenth splits the two Spaniards at the top of the combined standings, Dovizioso crashes

After being pipped to P1 in FP1 by Andrea Dovizioso (Ducati Team), Championship leader Marc Marquez (Repsol Honda Team) turned the myWorld Motorrad Grand Prix von Österreich tables back in his favour to go quickest in FP2 with a 1:23.916, meaning the Spaniard leads compatriot Maverick Viñales (Monster Energy Yamaha MotoGP) by just 0.066 at the end of Day 1, Dovizioso failed to improve in the afternoon to finish third overall.

Marquez came out the blocks all guns blazing at the start of FP2 as he sported a soft rear tyre. Immediately the number 93 was able to better his time from the morning session and went to the top of the combined standings, shoving FP1 pacesetter Dovizioso down to P2. The latter’s teammate Danilo Petrucci was also going well in the opening stages of FP2, the Italian had a quiet FP1 and lingered down in P14 ahead of the afternoon’s running but ‘Petrux’ launched himself up to P4 on the combined times.

The riders then settled into the afternoon session, with little going on in terms of the times improving. Marquez sat 0.4 clear of the pack in FP2 – 0.1 on the combined times – before a frantic last 10 minutes began to unfold as the weather forecasts predict there could be some adverse weather conditions on Saturday. Just like he did in FP1, Dovizioso was pushing for a quick time but the Ducati man, just after setting a red first sector, uncharacteristically crashed. Turn 3 was the location as Dovi slid out of contention with under five minutes remaining, his aims of finishing ahead of Marquez on Day 1 quickly evaporated.

Others were going quicker though and one of the big improvers was Takaaki Nakagami, the LCR Honda Idemitsu rider finished FP1 in a solid ninth but the Japanese star was finding time. First Nakagami went to P5 overall but on the next lap, the Honda man shot to P3 on the combined times, second in FP2. Viñales, third fastest in FP1, was also ramping his pace up and sure enough, the Yamaha man went second quickest – just 0.066 behind Marquez’ early session time. Miguel Oliveira (Red Bull KTM Tech 3) was also building on his 10th place in FP1 to shoot up to seventh on the combined standings, with Cal Crutchlow (LCR Honda Castrol) then popping up into ninth overall on his last flying lap after finishing outside the top 10 in FP1.

So it’s Marquez who takes Friday honours from Viñales and Dovizioso, the top three swapping positions from FP1 as Dovi’s lap from FP1 sees him keep his place inside the top three. Nakagami had a great Friday to finish fourth, just ahead of Fabio Quartararo (Petronas Yamaha SRT) who cements his place inside the top 10 having finished FP1 in P6. The Frenchman sits just ahead of sixth-place Jack Miller (Pramac Racing), the Australian slipping down a couple of places from his FP1 position but no matter, it was a good day at the office for the second-fastest Desmosedici rider on track. 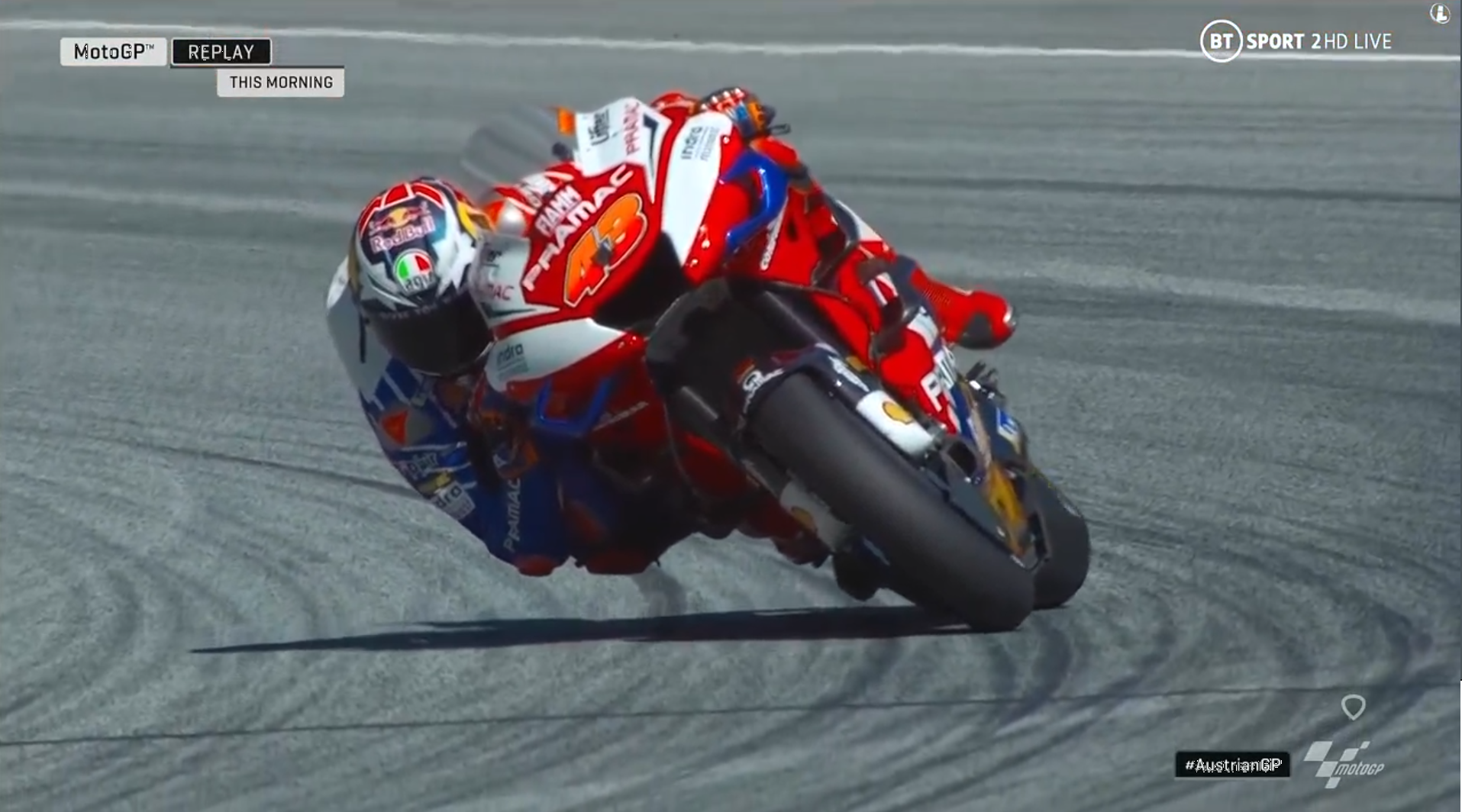 The aforementioned Oliveira produced one of the rides of the day on KTM’s home turf to finish well inside the top 10, seventh for the Portuguese man sees him sit ahead of Petrucci, Crutchlow and fellow KTM rider Pol Espargaro (Red Bull KTM Factory Racing) at the end of play on Friday.

Names such as Valentino Rossi (Monster Energy Yamaha MotoGP) and Alex Rins (Team Suzuki Ecstar) saw themselves slip outside the provisional automatic Q2 places in the afternoon, having sat fifth and seventh respectively after FP1. 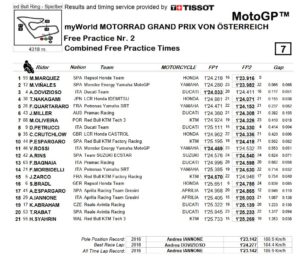