WorldSBK king Jonathan Rea went down on fluid left by the exploded SERT GSX-R1000 - which was still on track as liquids poured out of it - and immediately red flags were shown. After some confusion, Yamaha has deemed the winners and the crash was the end of an incident-packed last stint. Not only did it begin to rain with 25 minutes left to run but Rea was very nearly taken out when the Dog House team crashed after one of their riders hit a piece of exhaust as Rea rode around the outside of him on the exit of turn one. 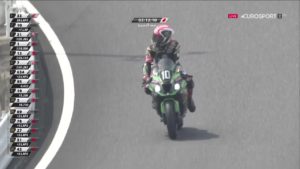 Rea stayed cool and continued to extend his lead over Red Bull Honda’s Takuma Takahashi, who he passed for the lead with 35 mins left, as the Japanese rider did back-to-back stints which were an error by the team as Takahashi was visibly tired. Reigning champions Yamaha, with Alex Lowes at the helm, went past Takahashi with 16 minutes left to run to secure second place but ended as the winners. Yamaha was the only podium team to use all three of their riders, with Kawasaki choosing to box Toprak Razgatlioglu even though Haslam has a broken bone in his wrist after a crash at Laguna’s Corkscrew.

Honda didn’t use multiple winner Ryuichi Kiyonari at all and Stefan Bradl was workmanlike, so Takahashi did most of the heavy lifting. 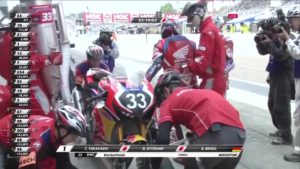 SERT looked certain to win the EWC championship by one point from SRC Kawasaki France with FCC TSR Honda in third place but the GSX-R1000 blew its motor with six minutes left, giving the title to SRC.

Yoshimura Suzuki bagged fifth place after leading for a majority of the first stint with YART in sixth place. Musashi Pro made up for a 90s pitlane penalty after a tire sticker infringement to take seventh place.