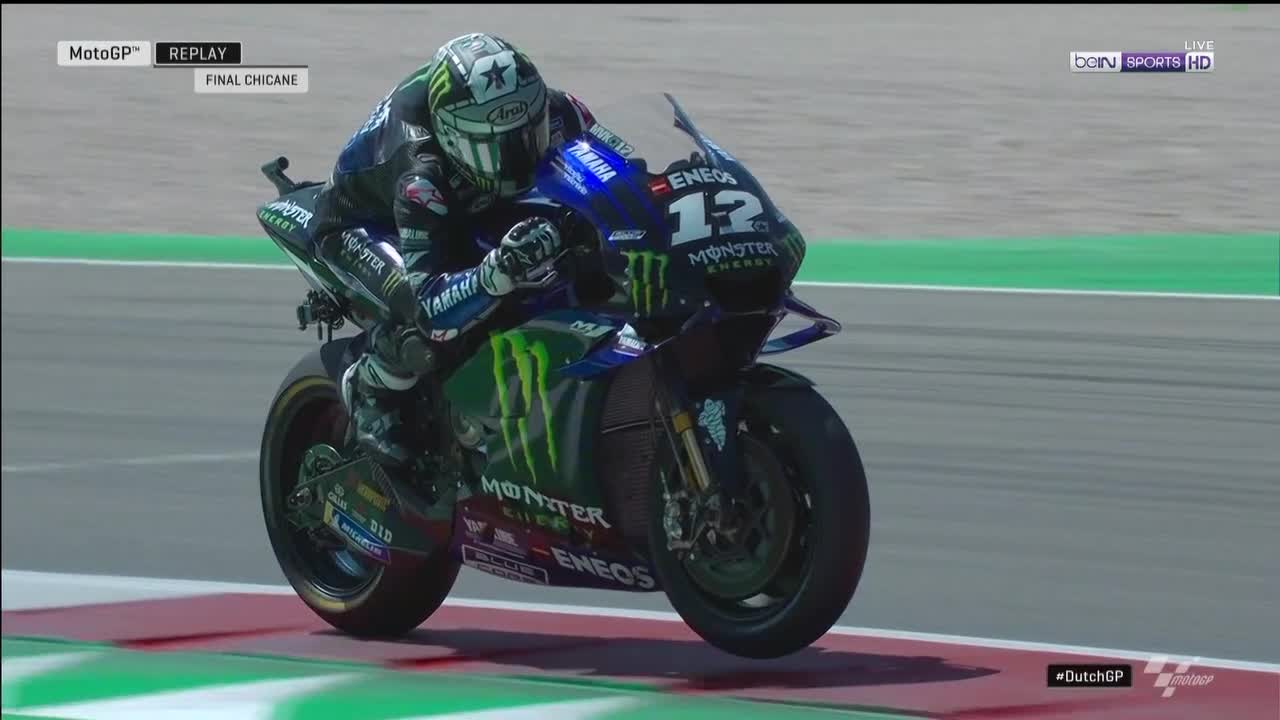 Yamaha rider Maverick Viñales won the 8th race of the season on the Assen track in the Netherlands.

This is the first victory of the Spanish rider this season, who had to fight against Marc Marquez and Fabio Quartararo, who finish respectively second and third. Johann Zarco gave up on the KTM and Valentino Rossi made the mistake, leading in his fall, the unfortunate Takaaki Nakagami. Alex Rins, the Suzuki rider returns home spotted in points for the championship, after also falling as he started at the top of the race.
It is 24.4 degrees in the air and 41.4 degrees on the track while they will start for 25 laps, the MotoGP riders. Yesterday it was Fabio Quartararo, the Petronas Yamaha rider who achieved pole position, for the third time, in the queen class. He was ahead of Yamaha official Maverick Viñales and Suzuki rider Alex Rins.

It is gone and it is Rins who turns in front at the first corner in front of Mir and Quartararo. Good start of the Ducati Dovizioso, he won 5 places, he is sixth. Petrucci is seventh. It heats between Marquez and Viñales, the pilot of Cervera passes the Yamaha driver, he is now fourth.

Quartararo passes Mir while Rins falls in turn 9. Quartararo is now leading the troops ahead of Marquez and Viñales. Dovizioso is fourth. Rossi goes into trouble in turn 8: He hits Nakagami who is evacuated on a stretcher. Johann Zarco is in tenth place, his teammate P. Espargaro is eleventh. Viñales puts pressure on Marquez, he is in his wheel, there are still 19 laps to go. Viñales is 7 tenths behind Marquez, the world champion coming closer to the French driver. A delay that allows Dovizioso to pick up the Yamaha.

At 16 laps of the goal, Marquez exceeds Quartararo. Vinales returns like a cannonball in the Quartararo wheel. The Frenchman passes the world champion who has taken too wide. The first 8 drivers ride in the same tenth: Quartararo, Marquez, Vinales, Dovizioso, Petrucci, Mir, Crutchlow and Morbidelli.

At 12 laps of the final, Viñales manages to pass Marquez. Behind, Petrucci doubles his teammate Andrea Dovizioso. Vinales makes the effort and gets rid of Quartararo. Mark in fact the same, the Spanish driver does not want to leave the official Yamaha. Still 10 laps, the top 5 is: Vinales, Marquez, Quartararo, Petrucci and Dovizioso. Zarco gives up on the KTM, he was eighteenth. Viñales loupe which benefits to Marquez who recovers the leadership of the race. But the official Yamaha does not decline flag and recovers the first position.

Dovizioso and Petrucci pass through the Suzuki driver, Mir who is now fourth. He remains 4 laps and in front of Viñales leads the dance in front of Márquez and Quartararo. Dovizioso is fourth, Petrucci fifth.

In the championship, Marquez is leading with 160 points. Dovizioso is second at 44 points. Petrucci is third at 52 points, Rins is fourth at 59 points, Rossi is fifth at 88 points, Quartararo is sixth at 93 points, Vinales is seventh at 95 points, Miller is eighth at 100 points, Pol Espargaró is ninth at 108 points and Cal Crutchlow is tenth at 109 points.