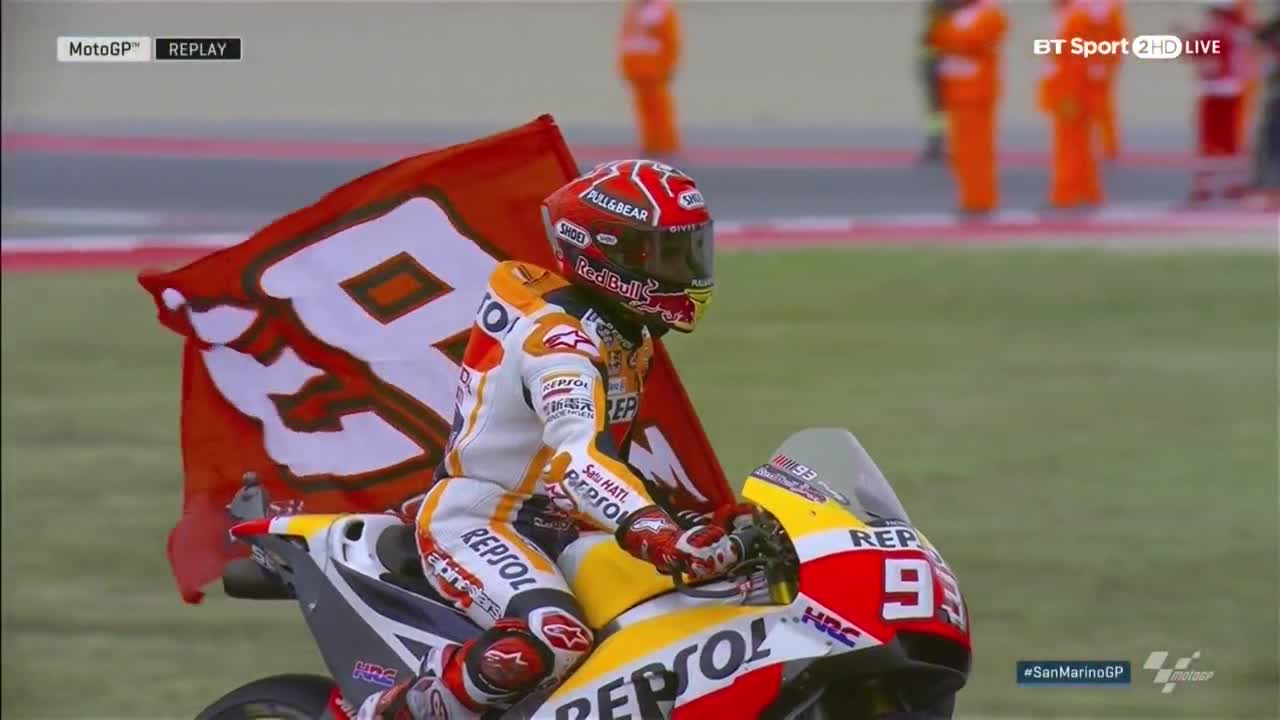 Marc Marquez (Repsol Honda Team) took his fourth win of the year in a high stakes duel at Misano World Circuit Marco Simoncelli, with the conditions torrential and the top three in the title fight lining up for the challenge on the front row. But as the spray cleared, it was Danilo Petrucci (Octo Pramac Racing) just ahead of the reigning Champion on track as the two dueled - and Marquez pounced on the last lap for another 25 point haul. That gives the number 93 the Championship lead once again as Andrea Dovizioso (Ducati Team) came home third, with the two rivals equal on points and equal on wins - and Marquez ahead by virtue of more second places.

But despite the challengers on the front row in the #SanMarinoGP, it was Jorge Lorenzo (Ducati Team) who got away best from Row 2, taking the lead through the first two corners after tousling with Marquez and shooting away into the distance. Marquez slotted into second and Dovizioso in third, with Petrucci then slicing around the outside of Maverick Viñales (Movistar Yamaha MotoGP) at the start of the second lap to begin his charge. After Viñales, the Pramac rider then shot past Dovizioso, beginning to hone in on Marquez and then taking over in second.

After setting the timesheets alight and clear in the lead, drama then struck the head of the race as Lorenzo suddenly highsided out at Turn 6 – rider ok – leaving Petrucci in the lead and a long game of highspeed chess to set in: Petrucci, Marquez, Dovizioso, and nothing between them.

As the laps ticked on and the stakes seemed to get higher and higher, Dovizioso began to fade backwards and the trio became a duo in the battle for the win. The ring of the Honda getting louder and louder behind him, Petrucci held firm but Marquez chose his moment well: heading through at Turn 1 on the final lap. The rider from Cervera was then able to keep a small margin as the spray kicked up behind him, holding his nerve to take win number four of the year – and the Championship lead.

That meant Petrucci took second and his fourth premier class podium, 1.1 seconds off the win after Marquez fired in the fastest lap of the race on the final lap. Dovizioso took a safe third place - his first podium finish at Misano - and another good haul of points, with Viñales able to similarly avoid mistakes despite the stakes, taking fourth to keep himself very much in the title fight.

Behind the front four, Michele Pirro (Ducati Team) made steady progress and once again impressed as a wildcard for the Borgo Panigale factory, completing the top five. Jack Miller (EG 0,0 Marc VDS) put in a signature stunner in the wet from way down on the grid, for some time threatening Viñales for the top four before eventually crossing the line in sixth. Seventh over the line was a fight back from Scott Redding (Octo Pramac Racing), ahead of a quality ride from rookie Alex Rins (Team Suzuki Ecstar).

Jonas Folger (Monster Yamaha Tech 3) shot through the field from P16 on the grid to take ninth, with an impressive double act behind him for Red Bull KTM Factory Racing, as Bradley Smith took his first top ten with the Austrian factory and teammate Pol Espargaro crossed the line in eleventh.

Alvaro Bautista (Pull&Bear Aspar Team) took points in P12 and kept out of trouble, ahead of Cal Crutchlow (LCR Honda) in P13 – who crashed in the early stages and remounted. It was a tough day at the office for Dani Pedrosa (Repsol Honda Team), as the Spaniard struggled to find grip and get heat into the tyres, crossing the line in P14. Johann Zarco (Monster Yamaha Tech 3) supplied some late drama as he had a problem on the final lap, but managed to push the bike over the line for the final point.

Now it’s the final European round before the flyaway races, and Marquez and Dovizioso are equal on points. They’re also equal on wins, but the number 93 has more second places – making him the new leader in the sixth change so far this season. And Aragon? That’s Marquez’ backyard, and the number 93 will march home with a single focus: victory.