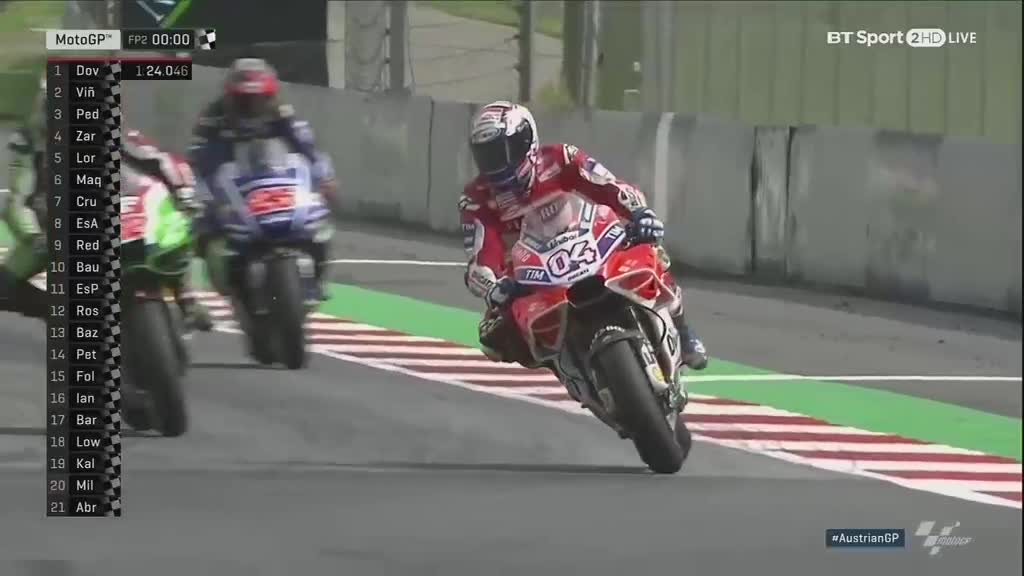 Dovizioso comes out fighting on Friday

Ducati rider fastest on Day 1 at the Red Bull Ring

After just being pipped to the post in FP1, Andrea Dovizioso (Ducati Team) hit back in the afternoon at the NeroGiardini Motorrad Grand Prix von Österreich as action ended in a shootout, coming out on top by two tenths to keep Ducati’s stranglehold on the venue. Maverick Viñales (Movistar Yamaha MotoGP) was second quickest after a late lap, ahead of Repsol Honda rider Dani Pedrosa.

FP1 was dry and topped by Hector Barbera (Reale Avintia Racing) by a few thousandths ahead of Dovizioso, after the Italian exceeded track limits on what had been his fastest lap. A shootout also ended that session as doubts about the weather circulated, with provisional qualification to Q2 at the forefront of everyone’s minds. But FP2, despite beginning with some damp patches, soon dried out – and the majority of the field made good use of the good conditions to improve their times.

Johann Zarco (Monster Yamaha Tech 3) was another threat for the top in the latter stages of FP2, and the French rookie ended Day 1 in fourth – very much in line for entry to Q2 should the bad weather return for FP3. Jorge Lorenzo (Ducati Team) was another big hitter in the second session of the day, and the ‘Spartan’ completed the top five after taking four tenths off his morning’s best.

Hector Barbera was one who didn’t go faster in FP2, and the Spaniard is therefore seventh on the combined timesheets with his laptime from the first session – only 0.015 off Lorenzo. Behind him was reigning Champion Marc Marquez (Repsol Honda Team), who was seventh quickest on Day 1 and only a further 0.018 behind Barbera. Marquez also had a run off in FP2, but remained upright and got back on track.

P12 was another incredible performance from Pol Espargaro as Red Bull KTM Factory Racing take part in their first home Grand Prix, ahead of nine-time World Champion Valentino Rossi (Movistar Yamaha MotoGP) – the biggest name who could be at risk of heading through Q1 should the weather set in on Saturday morning. Loris Baz (Reale Avintia Racing) and Danilo Petrucci (Octo Pramac Racing) locked out the fastest fifteen.

FP3 is the last chance to go straight through to Q2.