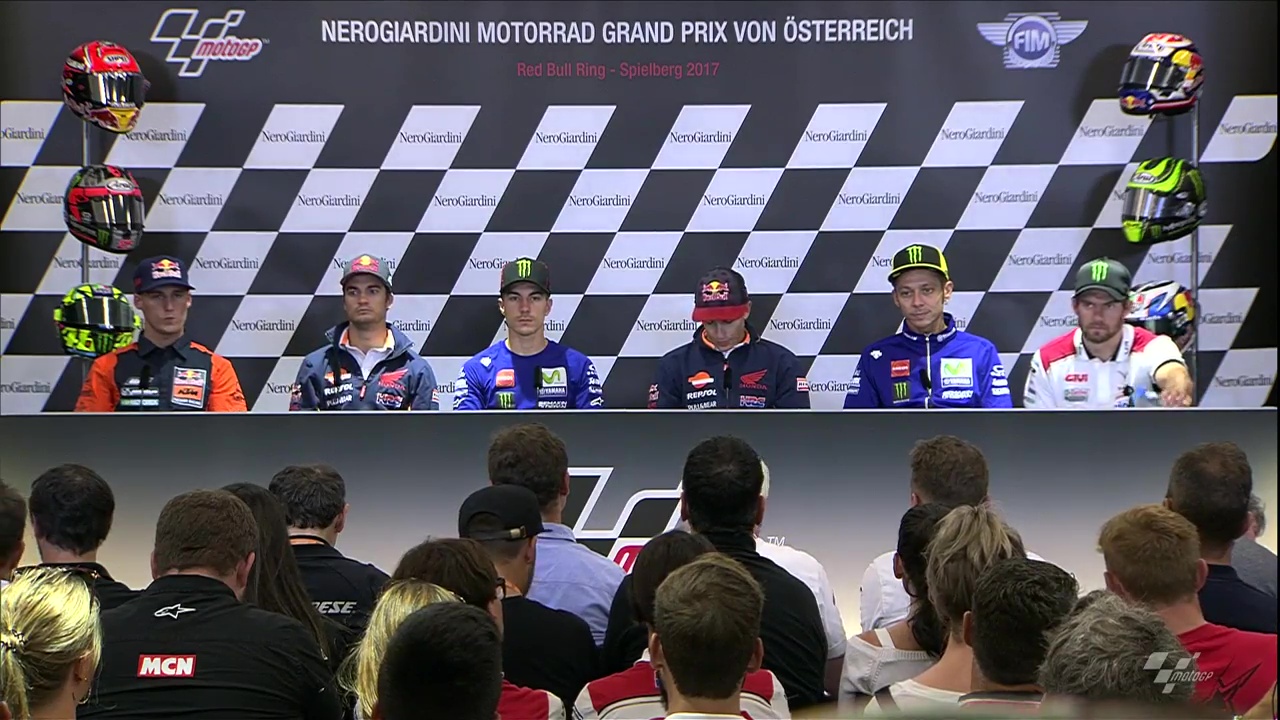 Pre-event Press Conference rounds up the Brno test, what the weather may bring, and the spectacular and speedy Red Bull Ring

With the weather forecast looking a little off kilter for the first day or two of track action, that was a point of discussion amongst the riders – as well as the outcome of the post-Czech GP test at Brno. And then, the picturesque setting and the high-speed, hard braking and hard acceleration of the track – very different to Brno.

Marquez was first to speak – feeling good about the weekend and quietly optimistic it will be an improvement on 2016: “We’ve come straight from Brno to here, and still the good feeling is there with a good feeling in the Monday test. We’ll see, last year it was a weekend where we struggled more, but last year we didn’t test here, and this year we’ve improved our acceleration a bit. Looks like the weather will be unstable so it will be important to always make the right steps, just trying to get the best setup for Sunday. The Red Bull Ring is a really special circuit, hard braking and acceleration. We’ll see if this year we can find the right balance. Last year I was ok but in the race the tyre dropped a lot, but this year we think we can be more competitive. This year we’ll see if we can fight for the podium, or top five or the win – you never know. In the test we found some things, I was riding comfortably and I’ve improved the front feeling a bit so we’ll see.”

Meanwhile, key rival Maverick Viñales was back on the podium for the first time in a while last time out – and equally feels positive on the approach to the Austrian GP. But after grabbing headlines on Monday in the Brno test with a new aero fairing, it won’t be back out on track at Spielberg for the number 25: “I really like the track, last year was really good and it’s a track where I was close to the top. I’m motivated for this weekend and after the podium I feel good again. In the test I felt great on the bike again and had a great rhythm, especially in the latter half of the day. We won’t use the new fairing this weekend because we didn’t find anything really positive, we want to test it again on another track. But we have ones we used in Le Mans so for sure we’re ready to test them and see if we can improve the acceleration here. If it’s going to be unstable weather, it will be important to be in Q2. I’m ready to go!”

Top in that much-discussed Brno test was Valentino Rossi, who says they found some progress. The rider from Tavullia also gave a good insight into the Red Bull Ring, citing its average speed and the concentration required on tracks like it: “Brno was a good weekend for me with the speed, and the test on Monday was good. We tried some quite good things, some things were the same and at the end I finished with more or less the same laptime I did on Saturday. We think here isn’t the perfect track for the type of fairing we tested at Brno but we’ll check during the weekend the best plan for the race on Sunday. When you ride this track, it’s a bit different compared to the others – it’s very, very fast, the average speed is incredible and there aren’t a lot of corners so you have to concentrate on every meter, and braking is so important. It’s a fun track, it looks like the weather won’t be fantastic this weekend but we’ll try and be ready.” 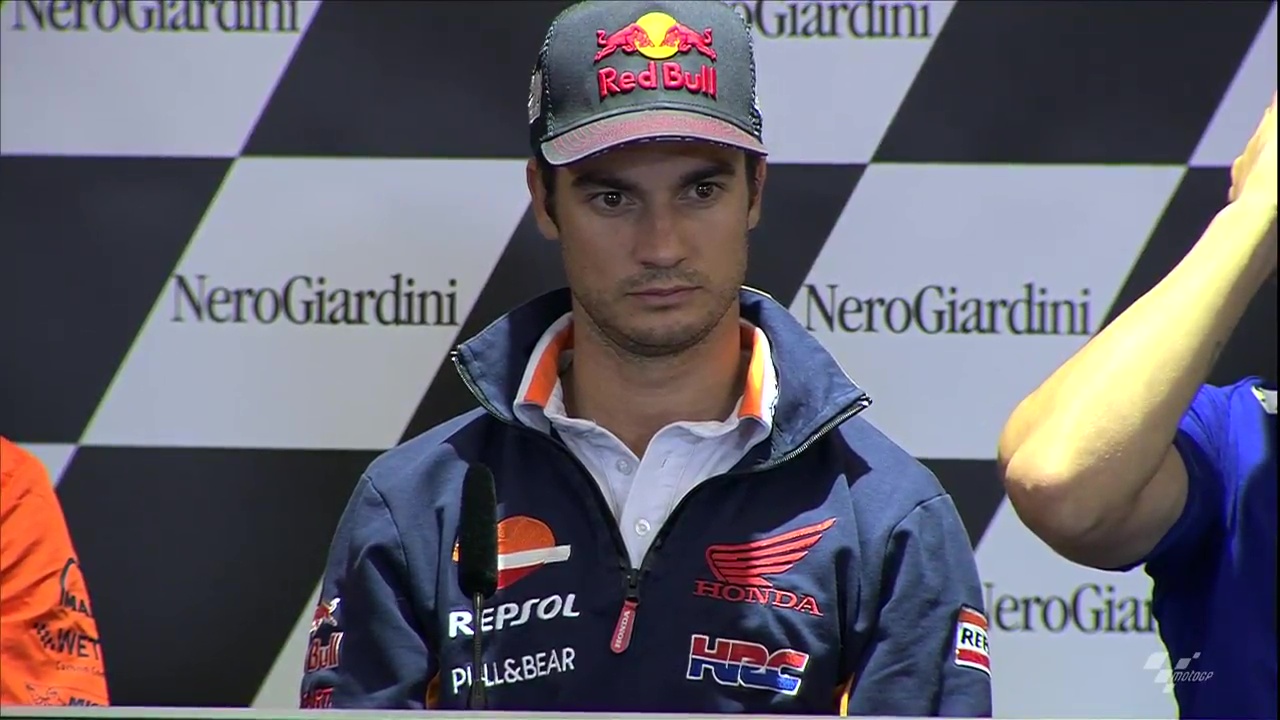 Pedrosa was also ready to knuckle down, knowing it could be a challenging venue with its fast acceleration and hard braking – and that there appears to be a pre-race favourite to keep an eye on: “In the last races we’ve been working well but at this track we have to be focused because last year we struggled a lot and in the weekend in general. We’ll see how the bike is on the track, and it will be important to do some laps, and as many laps as we can do, the more we learn for Sunday. We start here with the bike we finished with at the test. We want to see how the bike we’re using fits to the track, which is a different layout with strong braking and hard accelerating. We have to work out how we can struggle less with the wheelie and accelerate out of the turns – that will be one key thing. The Ducatis were so strong last year and we need to keep an eye on them, too.”

Finally, it’s the biggest weekend of the year for one team on the grid: Red Bull KTM Factory Racing. After their best ever last time out in Brno, where Pol Espargaro was P9 and with the smallest gap to the eventual winner so far, It’s a good roll of momentum for the Austrian factory to arrive with: “I’m really happy to be here and how we’ve come into it. To arrive here after what we scored last week is really nice because all the mechanics and everyone are really pumped to start the weekend. But there’s a bit of pressure! Brno was a great race, the conditions were strange but we had good speed. In the last races we were struggling to fight with others but I was able to catch and overtake some riders there. Every race we’re a bit better and closer, and especially the test we did at Aragon in summer was really good for us. It was almost impossible to have time to test everything! The factory are working really well, in a few races we came from last on the grid to the middle, which is unbelievable in just eight races. If we have a goal for the end of the year we have to keep working, and I really appreciate the job KTM is doing.”

A year after the debut of the KTM RC16 with some demo laps, it’s time to get back out there at the Red Bull Ring and take on the highest average speed of the season. The weather may be uncertain but the beauty and setting of the track are definites – as well as the ever-increasing pressure on the lead five riders in the standings to keep themselves in the fight as we gear up for Round 11.