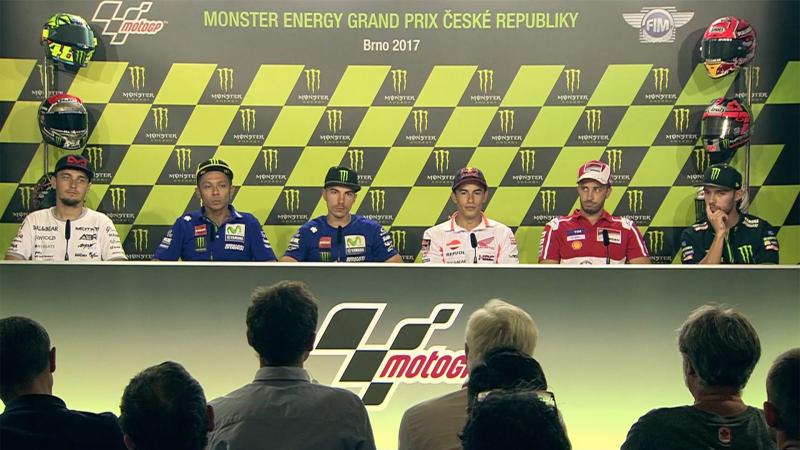 It’s been a long summer break for the MotoGP™ paddock and on arrival at Brno for the Monster Energy Grand Prix České republiky, riders were keen to get back on track and start the second half of what has so far proven one of the most thrilling and unpredictable title fights of all time.

As could be expected, talk focused on resetting everything after the break and getting ready for part two – with nine races down and nine to go, Brno kicks off the final countdown to the crown.

Valentino Rossi (Movistar Yamaha MotoGP) spoke for the MotoGP™ community in extending our thoughts to MotoGP™ Legend Angel Nieto and his family as the 12 +1-time World Champion  remains in hospital following a quad bike crash in Ibiza last week:

“It’s a bad situation for our world because Angel is special, for his charisma and not just his victories. Not just for 13 World Championships, but for the man that he is. So we hope for the best.”

First to talk about the weekend ahead – and the season – was Marquez, with one eye on the weekend and one eye on the long game: “I’ve had time to relax, time to train and time to test – now it’s time to turn everything on again and get into the rhythm of a race weekend again. This second half of the season it will be very difficult to always be on top and competitive because there are many riders there, but we’ll try – from Brno to Valencia. The test we did here will be a small help because normally here we struggle a bit. We did on day one at the test but the second day we improved a bit. It looks like the temperature this weekend will be very high, and during the test it was more fresh - but it should be a small help.”

Closest contender Maverick Viñales is only five points behind the number 93 in the standings after having proven one of the four different Championship leaders so far this season, and he returns similarly focused, with key points of improvement for man and machine clear in his mind: “We restarted the second part of the season on a good level. I feel really good, physically and mentally really strong. We had a month to think and for Yamaha to look at all the information, now we have to build a good bike with a really good setup and feel again as strong as I was in the first part of the season. But I feel relaxed and focused. For me we have to improve when the conditions aren’t the best – when it’s mixed or rainy conditions. I feel good so let’s see, I think when you feel good everything goes good.”

In the tightest title fight in years, the man in third is only another point further back, and also led the incredibly unpredictable Championship earlier in the season. ‘DesmoDovi’ is now allowing himself to consider the possibility, but maintains every race is a different story – and that Brno is like a reset button on the title fight: “We struggled here a bit last year but it’s not bad this track- it’s difficult for everyone. Last year the grip wasn’t the best with a lot of bumps so we’ll see how it is this year. But every race this year is a different story! I’m very relaxed, and it’s like we start a new Championship – we’re very close and there are nine races. If we have a chance to fight for the Championship I’m there and relaxed, but we will see. There are a lot of different tracks before the end of the season and anything can happen. We will just try to fight and be on the podium as soon as possible and as often as possible.”

Compatriot Valentino Rossi was next to speak, with the nine-time World Champions 10 points off Marquez on top and happy to be in with a good chance by the halfway point despite the ever-changing title fight. As did Dovizioso, Rossi mentioned the unpredictability of the year and found some positives – even if it meant suffering in some races more than others: “I’m so happy to be there – this Championship is very interesting. A lot of different results form one week to the other, and five riders in the fight with no big difference. So we start the second half and every weekend will be a surprise because no one knows what to expect. Last year in Brno I was very strong after practice, but the conditions changed for Sunday and I was lucky to change to the right tyres. The target this year is the podium on Sunday. You have to be strong when you feel good with the bike and tyres, and try to not be in too much trouble if you’re not so fast. But from one point of view it’s good because you can think weekend by weekend or even day by day, because everything changes.”

Folger is another eager to get back on track, having taken a stunning first premier class podium last time out at his home GP. With confidence high and no pressure as a rookie, his goalposts have moved – wanting to back that up with more results over the second half of the season: “We’re very hungry after the great race and second position in Germany, I don’t think anyone expected it – especially at the beginning of the season. It feels great to show everyone and myself that I’m able to do this. It was a great help for my confidence. Even after bad races this year my team have told me to keep my head up but it’s a bigger help when I finally make result like that. I have to take the confidence and what I learnt from Marc and Dani during the race and try and have another good weekend here in Brno. I’m sure the second half of the season won’t be easier, but out goals are bigger now because we took second. We want to show it wasn’t just luck. As many points as possible. I have no pressure, I’m still a rookie, and I want to have more highlights. When I debuted here I didn’t expect to be here in MotoGP - at one point in my career I was close to even stopping riding, but I guess I had to go through this to be here now.”

Home hero Karel Abraham rounded out the speakers ahead of the Czech GP, following a solid season of good highlights for the rider from Brno – and he couldn’t be happier about it before taking to his local venue: “I’m really happy to be back in MotoGP and I think with a good bike and team, we are doing a really good job. The results just came, especially the best one from Assen. There are a couple of things we still need to work on but we’ve made so many steps and we’re getting so much better every GP so I’m really pleased about that. The GP15 is the best bike I’ve ridden, I really like the Ducati. My team is doing a great job and we work together really well. Brno is a special event and I’m really happy that so many people come here to visit for this GP. It’s a bit difficult for me though because there aren’t so many Czech riders, so all the pressure comes to me and the other ones! But I’m so happy to be here and ride this weekend.”

Nine races remain, with one crown waiting at the finale. 26 points from Marquez in first to teammate Dani Pedrosa in fifth mean it has never been closer as MotoGP™ prepares to fire up for the second half of the season.