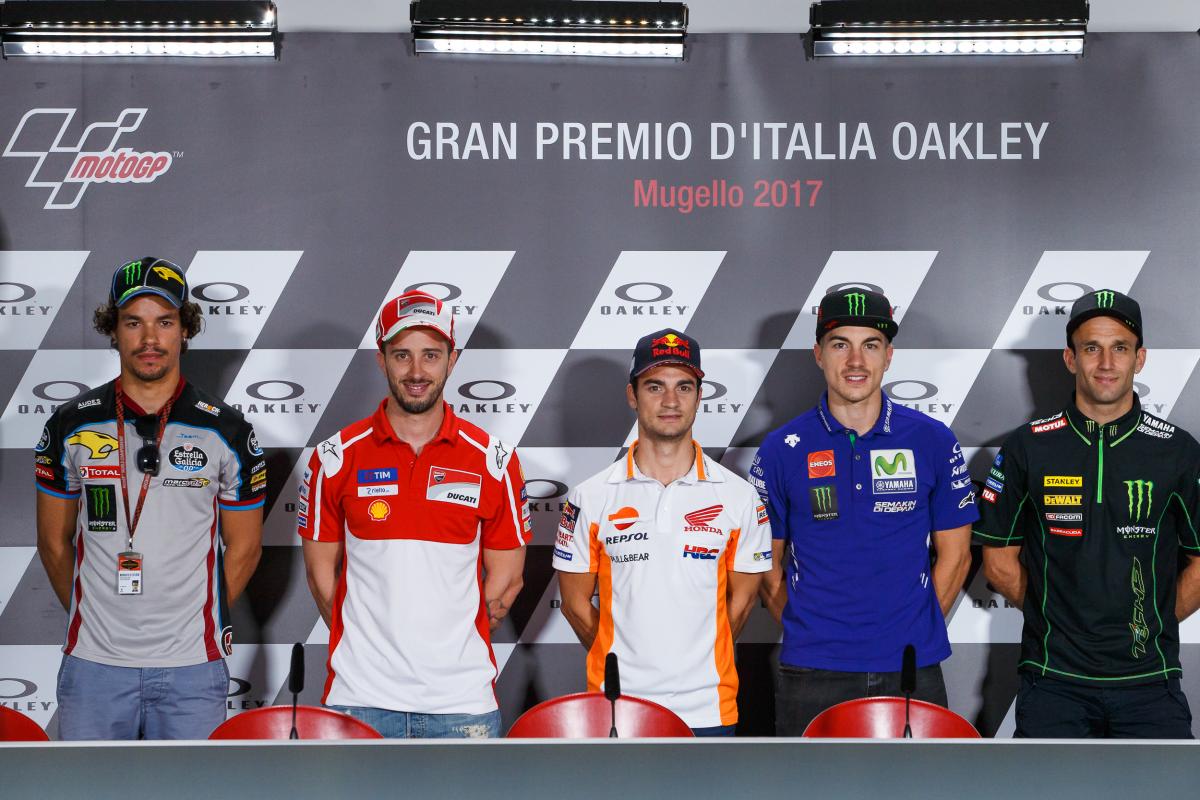 First to talk was Championship leader Viñales – who heads into the #ItalianGP with a 17 point lead – and is racing on his teammate’s home turf armed with data from the most recent winner at Mugello: “It’s never easy! There are so many Valentino fans and it will be difficult, but we’re really motivated and we know our bike can be really strong here. After Le Mans we improved the bike a bit but we still have so much to learn, and I still have to improve my riding style – it’s still not 100% perfect for the Yamaha. I have to copy Lorenzo’s riding style because he was always very fast here! We know we can be strong here.”

Hot on the tail of Viñales is now Dani Pedrosa, after the Spaniard stormed from P13 to the podium in France – and he doesn’t intend on climbing comeback mountain this time around, with qualifying and being fast from the start his key aims as action opens: “This is an important race, and I’m happy to be here with this good weather! Sometimes in the morning it can be difficult here but this temperature is much better. This is a track where you need some laps to get the feeling. It’s a fast track but if we have good weather we can do more laps, and it’s important to start this weekend well. In the Championship the last race was important, but after the test in Catalunya we made some improvements and we want to confirm that here. To ride, this track is amazing. It’s a great feeling, up and down and fast corners with so many people at the track. And with these bikes, you can go so fast in a straight line – it’s a really nice track for MotoGP.”

That’s something yet to be experienced by Monster Yamaha Tech 3 rookie Zarco, although the Frenchman heads into the weekend fresh from his home podium – and thinks he learnt something useful during that French GP: “It’s going to be interesting to try this bike here. Every time I go home after a race I’m waiting for the next one to get on the bike again! Here I got good results in the past. Maybe I understood something in Le Mans too, we’ll see tomorrow but if it’s right then I think here we can do well again. I couldn’t even expect a podium, and second place in France when I had been happy with third! The target is top positions, so why not podiums? I had one, so why not another? I never expected it but I’m happy, and I need to keep pushing to keep this level.”

The push for progress is not only a rookie challenge, with the Ducati Team working hard to get back into the fight for the win after challenging in the season opener in Qatar. Veteran in red Andrea 'DesmoDovi'-zioso says the home race brings pressure – but also echoed Pedrosa in his love for riding Mugello: “Everybody knows this race is nice for everyone, but it is especially for us, and for Italian riders. Mugello is something special. For Ducati it’s important and so it’s important to get good results. Last year the gap was quite small to the lead so I think we can start competitive but we’ll see because it’s a different story every weekend, last year and this year. We tested here but without our competitors it’s hard to know. Our target though for sure is to be on the podium. It’s difficult to start in front. FP3, Q1 and the race…but in MotoGP it’s important to start at the front. That’s the first target, then the race. The pressure is really high and we have a lot of things to do, but it’s great to ride here and amazing to see all the fans.”

Compatriot Andrea Iannone is another feeling the home pressure but alongside the positives, and another with a clear goal for the GP: “At this track I have really good memories, last year I was on the podium, in 2015 and in Moto2 I won. But this year I arrive here after more difficulties. The feeling with the bike isn’t the best, and I’m not at 100% with the bike. In MotoGP that’s a problem. But I’ll try my best and from tomorrow I’ll try to work well with the team to stay close to the top. I think we understand the direction. It’s difficult to improve during the race weekend but we’re waiting for new parts from Japan and then we have a big chance to improve. And this track for us is not bad. I hope it’s a good race for us, I want to be in the top five or top six.”

The start to 2017 has been a different story for Moto2™ title leader Franco Morbidelli, with four wins out of five so far and now his first home race of the season. Characteristically relaxed, the Italian knows he’ll be facing down some extremely tough rivals – but also thought the same of Le Mans: “We’ve made a great start to the year, and I’m really happy about that. Couldn’t ask for any better, maybe just to not crash in Jerez but you always make some mistakes. Now here is a track where I’ve never been fast before, so here it’s important to be fast. It was a good feeling to win in Le Mans, I wasn’t expecting it. I was just looking to finish and get some good points, but when I started I had a great feeling and rhythm, so I said ‘ok, why not go for the win’? There are a lot of people who are fast here – it’ll be hard, and it’ll be important to get points, get a good start and stay at the front.”

The Italian GP is always a true highlight of the MotoGP™ year, with the riders’ passion for the track more than mirrored by the fans. The light at the end of pitlane signals go-time on Friday morning as this year’s Gran Premio d’Italia Oakley begins and we wait to see who will be atop the podium when the yellow smoke clears.