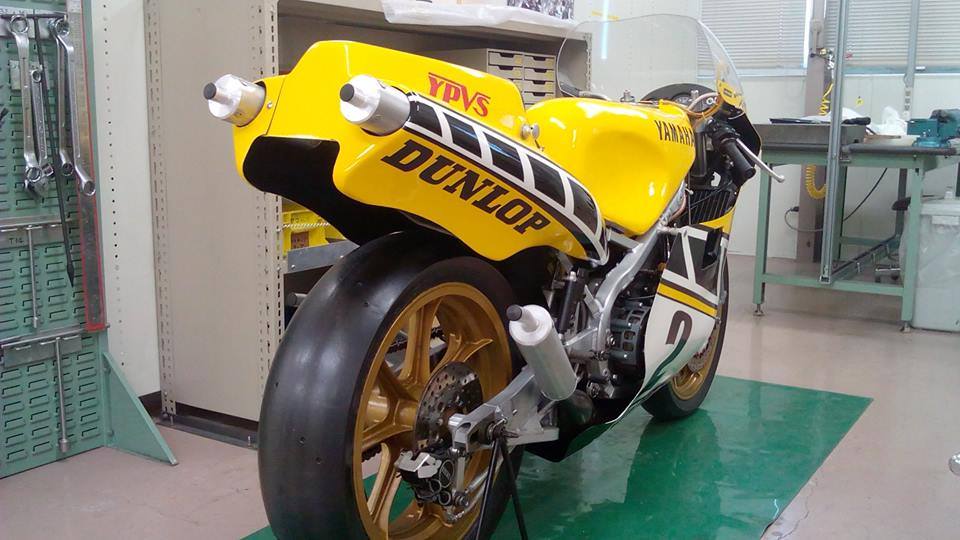 I made the little information I could find, here attempts to record the brief but glorious history of the rarest and least known Yamaha racing machines in the world. Statistically, there was - with a success rate of 100% - the most successful Yamaha ever. Both races where it was used, it has (with the same driver) won! For a long time I did not know that this motorcycle exist with and the name YZR680 OW69 was never heard. It was the strongest racer 2 strokes who had left the Halls Yamaha to 1984. So I want to keep this story as "The Last Unicorn" here in memory.

Kenny Roberts had in 1982 with a Yamaha YZR500 OW60, which is the part with the Square Four engine, the 200 Miles of Daytona, had set the pole position and was in the running, being chased by the large volume TZ750 Graeme Crosby, the eventual winner, with crankshaft damage failed. Thus, the researchers assumed that the 500 was simply too small to insist on such a long distance to be a real contender. Even if there is already such an old structure was like Crosby TZ750, but these old machines still held the flags Yamaha's high. Thereupon let the work, whose famous was YZR750 OW31 course outdated at this time, come up with something for the following year. 1983 was the factory at the GP race no Square Four engines more, but from the 500cm³ GP machine YZR500 OW60 created especially for Daytona, the YZR680 OW69.

Naturally it had to be changed a lot. A new crankcase, a new crankshaft, cylinder and other heads, pistons and a completely new exhaust were the result of the displacement increase. Furthermore, a larger radiator was necessary. From 64 x 54mm bore and stroke to 695cm³ capacity, which is actually at first sight meant a step backwards for TZ700 / 750A yielded. At least, if one considers only the capacity into consideration. When one considers that the whole machine and the performance achieved, which looks a little different. First, they brought about 150hp to the rear wheel, were in consequence 175 horses that Kenny Roberts in 1983 rode to victory and Eddie Lawson to 2nd place. The chassis or frame of the YZR500 OW60 was largely unchanged. 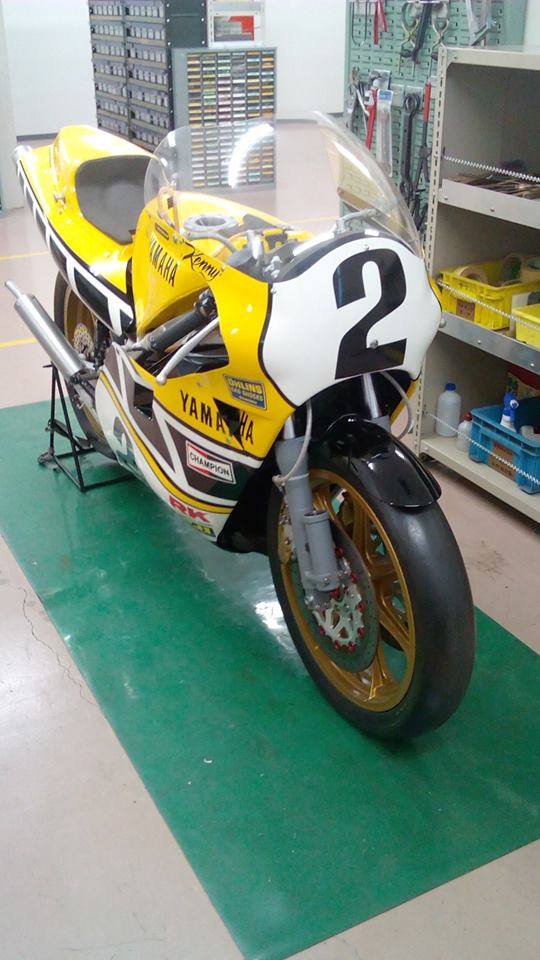 To make the engine by turning the rear wheel at every opportunity, mobile, was disarmed for the following year. some power still was withdrawn to make the bike more maneuverable even during training. Ongoing Roberts and Lawson complained about too much power. The race was won, in spite of his opponent Freddie Spencer and its extremely fast and futuristic Honda NSR500 (see below - 1984 Daytona 200), again Roberts.

Roberts had much more than about too much power for his motorcycle; so that between Roberts and the slowest of the difference in speed was around 80 km / hr !!! Daytona 1984 is referred to as the last great 200 miles race in history, because after that the rules in favor of the large volume 4 strokes Superbikes changed. The large 2 strokes ground missiles disappeared, perhaps forever, in the museums

There have been more than a few "end-of-an-era" races at Daytona over the years. The first dates back over fifty years. The Daytona 200 was canceled while America fought WWII, and some felt it would never make a comeback. Then, in the late 1950s, the Daytona 200 was like a 1980's-era Rolling Stones tour, in that it seemed to have a perpetually frail future. Year in and year out during the 50s, the upcoming Daytona 200 was reputed to be the last and no one knew if there would be another. In fact, it wasn't until the 200 moved from the sand to the banking in 1964 that all of the scheduling and problems of holding the race on a public beach ended.

Some purists call the 1984 Daytona 200 the last "real" Daytona 200. Certainly it was the last of its kind. 1984 was the final year that the Daytona 200 was run under AMA F-1 rules, where the factories entered mega-buck two-stroke racers in a bid for North Florida supremacy. In 1985, the Superbike class moved up to the headline class at the Speedway, and the fabled F-1 class was just another support race.

Both Yamaha and Honda built special motorcycles for the 1984 Daytona 200 based on their '83-84 GP machinery, and in Yamaha's case, their Daytona-spec bike was actually even more armed-to-the-teeth than the factory GP bike they'd race that season.

Honda had won the world championship in 1983 with a diminutive NS500 V-3 racer, beating Yamaha's four-cylinder. The writing was on the wall though, the triple was near the end of its performance life—more power was needed by Honda to keep the trophy stream flowing to HRC. For 1984, Honda shipped to Daytona the very first NSR500, the legendary V-4 two stroke racer whose lineage is essentially a reading of former GP world champions.

Looking back now, it's obvious that the 1984 NSR500 was the anomaly of the NSR line—Honda crated a motorcycle for Daytona that year that would be just as groundbreaking if it rolled down the pit lane 20 years later.

The '84 NSR500 was the infamous 'upside down bike', the HRC-racer with its lightweight exhaust pipes mounted atop the engine (running under a carbon fiber shell shaped like a fuel tank) and its fuel tank mounted under the engine, where a conventional fairing/belly-pan resides today. HRC, always willing to make engineering gambles, made these two dramatic modifications to their new GP bike in order to maximize weight distribution, essentially putting the fuel load, and thus its center of gravity, as low on the motorcycle as possible. However, both of the novel technical features of the '84 NSR500 took a back seat to its most obvious characteristic, one that quickly showed itself—the NSR500 was a rocket ship. It was geared for 195 mph and could pull within five mph of that at Daytona under optimum conditions.

On the other side of the Daytona garages, Yamaha shipped to Daytona in 1983 perhaps the most wicked GP bike the tuning fork concern ever built. While GP rules have long limited engines to 500cc, in the early 1980s, AMA rules were still morphing from the F-750 structure to the future 500cc limit of AMA F1. In 1983 one could still run a 750, hence, Yamaha built a "Daytona Special", a 680cc version of their current GP bike—and they won the '83 200 with it, in spectacular fashion.

Whereas the new reed-valve, 'upside down' Honda was state-of-the-art and then some, the square-four OW69 Yamaha was based on an older, but still very successful, Yamaha GP bike; one Yamaha simply hit with the horsepower stick and boring bar until it could put out no more power. Kenny Roberts won the 1983 Daytona 200 on the original version of the OW69, and afterwards, he actually asked Yamaha that the '69 be toned down for '84 because the bike's powerband and overall manners at speed were too wicked and too aggressive. They complied.

For 1984, Roberts and team-mate Eddie Lawson rode updated OW69s at Daytona, with new cylinders to broaden and smooth out the powerband. The 680cc, 305-pound Yamaha could still light up the rear tire at 150mph, and was a bear to get off the corner, but it was more manageable than the '83 version.

The '84 200 was special for more reasons than just hardware, though. It would be the first time Freddie Spencer and Kenny Roberts would race each another after the titanic battle of the 1983 season, which saw Spencer win the world 500cc crown (at age 21). Roberts had retired at the end of 1983, but was doing one-off races for Yamaha. He'd do the Daytona 200—a race he won twice perviously and a race Yamaha won 12 times in succession prior to 1984.

In qualifying for the 1984 Daytona 200, Honda's new unconventional racer made it look like the era of the topside fuel tank was over—Spencer sat on the pole with lap time that was over two seconds better than reigning Daytona winner Roberts. Both Roberts and Lawson were edgy on the subject of riding and racing the OW69, comparing it to hitting golf balls with a bat instead of a driver—when you did manage to connect, it was messy at best. Even in their backed-off state of tune, the Yamahas were very hard to ride, brutally fast and not very agile. One spectator watched as OW69-mounted Roberts passed 30-odd motorcycles in his first two laps of practice. And still, he could not match the lap time set by Spencer in qualifying.

In the 1984 Daytona 200, Roberts led and Spencer hounded him. Then Spencer drifted back after the first gas stop when his Honda's exhaust pipes began to crack; he was further handicapped when his rear Michelin chunked later in the race. Eddie Lawson tried to duplicate the Yamaha 1-2 he and Roberts had scored the Daytona prior, but had tire trouble himself and was out of the race. Roberts and the OW69 Yamaha won.

The '84 Daytona 200 would truly be the end of an era on many different levels. The 200 went Superbike in 1985, and the mighty two-strokes were relegated to sideshow status. The massive Honda versus Yamaha factory battles, when they flew in world championship riders and crews to the Speedway, also ceased. And Roberts retired from Daytona racing—an event he had embodied for nearly a full decade.

For Honda, being beaten at Daytona with an old-school Yamaha was only the first part of a season filled with bad news. On the final laps of the '84 200, Spencer was trying to hold second place together and waiting to see if Roberts and the OW69 would make it to the checkers when he felt something odd coming up from the NSR's chassis. It wasn't a sensation he could quite put his finger on; it felt unlike anything he'd experienced before.

Two weeks after Daytona, at the South African GP, Spencer crashed heavily in the closing moments of the first practice session of the new GP season. Spencer was expected to walk the 1984 GP season, but ended up sitting out the first GP after his nasty crash. Inspection of the NSR500 showed that the rear carbon-fiber wheel had collapsed, putting Spencer on his ear at eighty mph.