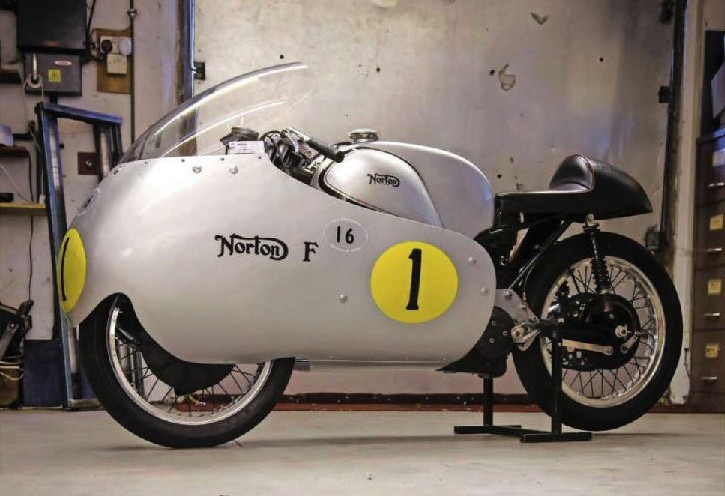 F-type (F for flat) Some bikes are a long time in development, but this one has taken an incredible 60 years to reach its finished form. A Norton F-model, designed in the mid-’50s in a still-born attempt to wrest the 500cc World Championship back from Italy’s rampant Gilera fours, it has just received its final touch – the dustbin fairing for which it’s been waiting six decades, under the auspices of its owner, none other than Grand Prix legend John Surtees.

The Gilera was the machine to beat in GP racing – and its transverse-four legacy continues in MotoGP today. Norton’s policy, on the other hand, was to stick to just one cylinder with its works machines; but there were still things that the factory’s race chief Joe Craig could do, such as tip the cylinder forward to lower the bike’s centre of gravity, benefit from down draught carburation and provide better airflow to the engine with a dustbin fairing. Moto Guzzi were then demonstrating how effective a streamlined horizontal single could be by dominating the 350cc world championship. A dustbin could add 10-12mph to the top speed.
Norton works rider Ray Amm and mechanic Charlie Edwards tested the new F-type (F for flat) at the MIRA test track in October 1954, without a fairing, and were impressed. However, when they returned to the factory that day their elation was crushed by news that Norton and the AMC Group (who owned AJS and Matchless) had decided to pull out of world championship racing. Amm cleared off to MV, while Edwards dismantled the beautiful new baby and put it in a storeroom in Bracebridge Street.

Now a 20-year-old innocent, John Surtees, enters the plot. In 1954 Surtees became the sensation of the British short-circuit scene by winning no less than 50 races, including seven in one weekend on two different circuits. In those days a race meeting wasn’t a three- or four-day drama: practice and racing took place on the same day, spectators enjoyed massive value for money, and at a Good Friday or a Saturday meeting, riders would load their vans, post-chequered flag, for the next day’s action.
Joe Craig invited Surtees to join the Norton works team for 1955, but explained that they would be doing only a limited number of races, and the bikes would be ‘works development’ Manxes – testbeds for the factory’s customer production-racer bikes. Still, Norton were offering a £500 retainer – equivalent to about £12,250 today. It was big money to a lad who had been scraping by race-to-race on the prize money he earned, as racers do.

“The F-model was never mentioned,” John says. “I had heard the rumours, but when I asked questions, no one was forthcoming. I quizzed Craig and eventually sneaked off to have a brief glance at what the bits would have looked like, but they were in boxes and there wasn’t much to see.” John moved on, to world championship glory with MV and Ferrari. Fast-forward around 25 years. Having closed his racing car team in 1978, JS is building up motorcycles that he was associated with during his two-wheeled career. In a search for Norton pieces, he visits motorcycle dealer and tuner Syd Mularney and the remains of the F-type come to light. “I had always felt cheated I had never had a chance to ride it,” John says. “I desperately wanted to see it together and try it out.” He bought the parts from Mularney and scoured the country for missing components, while Charlie Edwards was able to describe the F-type’s original specification. John completed the restoration of the bike in 1998 and rode it at Goodwood, but only now, to coincide with 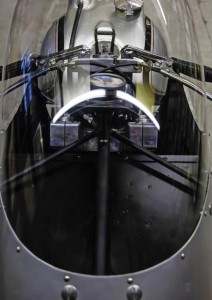 the 60th anniversary of the bike’s planned appearance in the 500ccWorld Championship, has he added the final touch, the dustbin fairing. “Norton never made a fairing for the bike,” he says. “When I came to make one, I went along with what I had done in the 1950s, when I had dustbin fairings made in England for my own private Manx Nortons. At that time we followed the principles in dustbin design that had been laid down by Moto Guzzi and Gilera. Moto Guzzi tested theirs in their wind tunnel. “I got someone who had originally made the fairings for Guzzi to build the one for the F-type.
I went to Italy for an historic event, and I was taken to this very old-fashioned fabrication shop by my good friend Gianni Perrone (a leading collector and historian). We put our heads together, and with my sketches and their know-how, we built the fairing. This was just after 1998, but I never found the time to fit it to the bike until now, when I thought it should be shown in its true colours for its 60th anniversary.” During the restoration process, John found something really precious in the boxes of parts he acquired from another tuner, Reg Dearden – the components for the original trailing-link forks. “Finding those was a major step forward,” he says. “Manufacturers who used telescopic forks and dustbin fairings struggled to maintain the attitude of the bike under braking and acceleration, because if the front end dives or lifts, that can affect aerodynamics and cooling.
Guzzi avoided this by using a leading-link fork, while Norton tested a trailing-link at the Isle of Man in 1953.” Major parts for the F-type were still missing. John had to make the outside flywheel and the cylinder barrel, with its horizontal finning for which he had the pattern, and the spine-type, oil bearing frame (the original had been cut up). The unit construction engine casings contain an unusual three-shaft, five-speed gearbox, with the internals made by the Burman gear company. 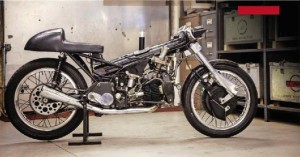 But only a couple of gears came with the parts boxes, and none of the selector mechanism, posing a serious problem. The F-type’s engine runs backwards, so the power take-off to the rear wheel is on the right, rather than on the left as in a conventional engine. “But someone forgot about the backward running, and they had to carve the oil pump around to get any oil flow for the test at MIRA,” John says. “I went to Reynolds chains, and we solved the problem with a small chain drive inside the timing chest, with a slipper to control the tension, instead of gear-drive from the mainshaft.” John’s back was giving him problems, so Ian Skinner, who works with him, debuted the dustbin-faired F-type at the Goodwood Festival of Speed in June and did four runs up the 1.16-mile hillclimb. “The bike ran as straight as a die and was quick,” Ian said. “You would think that the suspension would feel weird, but it doesn’t feel any different to a tele-forked bike. There was no dive, and the bike was positive and precise in the corners.” “I was watching very carefully from the side of the track, and it looked nice and steady,” John said. On this marvellous morning in John’s workshop we have admired the F-type’s elegant form, photographed the bike with and without its fairing, and listened to John and Ian talking about its restoration. But now I have to pose the critical question: could the 21-year-old Surtees and the F-type Norton have challenged the Gilera factory riders Geoff Duke and Reg Armstrong in 1955? “The 1955 works development Nortons didn’t have as much power as the full works 1954 outside-flywheel bikes, but when we competed against the Gileras and the Guzzis on British circuits, we were very competitive and I was twice able to beat Geoff,” he says. “Guzzi never hadmajor success in the 500cc class with their singles, because I think they had originated as 250s. The 350 was a fantastic bike, but they never got the 500 quite right. I’m sure we would also have been competitive with theMV fours and Walter Zeller’s BMW.” 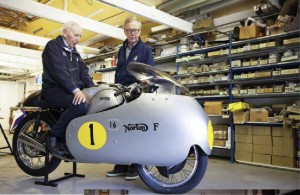 The Manx Norton had been designed for 226-mile TT races in the hands of private owners, so it was a sturdy piece and not as light as the Guzzi singles (their ultimate 350, the ’57 version, is said to have weighed only 216lb/98kg). But the F-type, at around 290lb (131kg), would still have had a weight advantage over the 310lb (140kg) Gilera. Lightness and simplicity versus power and complexity is one of racing’s eternal battles. “If Norton had decided to run a full factory programme in 1955, Ray Amm would probably have stayed and I would have been with him,” John says. “The F-type would have been in with a chance. On the testbed the engine had the same horsepower – around 54bhp – at the back wheel as Ray Amm’s 1954 TT-winning works bike had at the crankshaft. And this was without any development. “Could we have beaten the Gileras? Who knows? Maybe.” John was never able to race Britain’s final throw of the GP dice. But today the F-type has a different noble role – as one of the bikes and cars that appear in John’s fundraising work for the Henry Surtees Foundation, which supports accident victims in memory of his son who died in a car race at Brands Hatch in 2009. 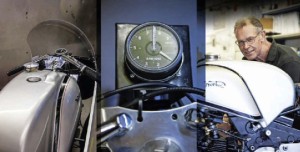 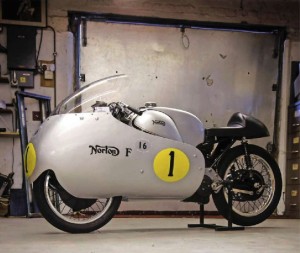