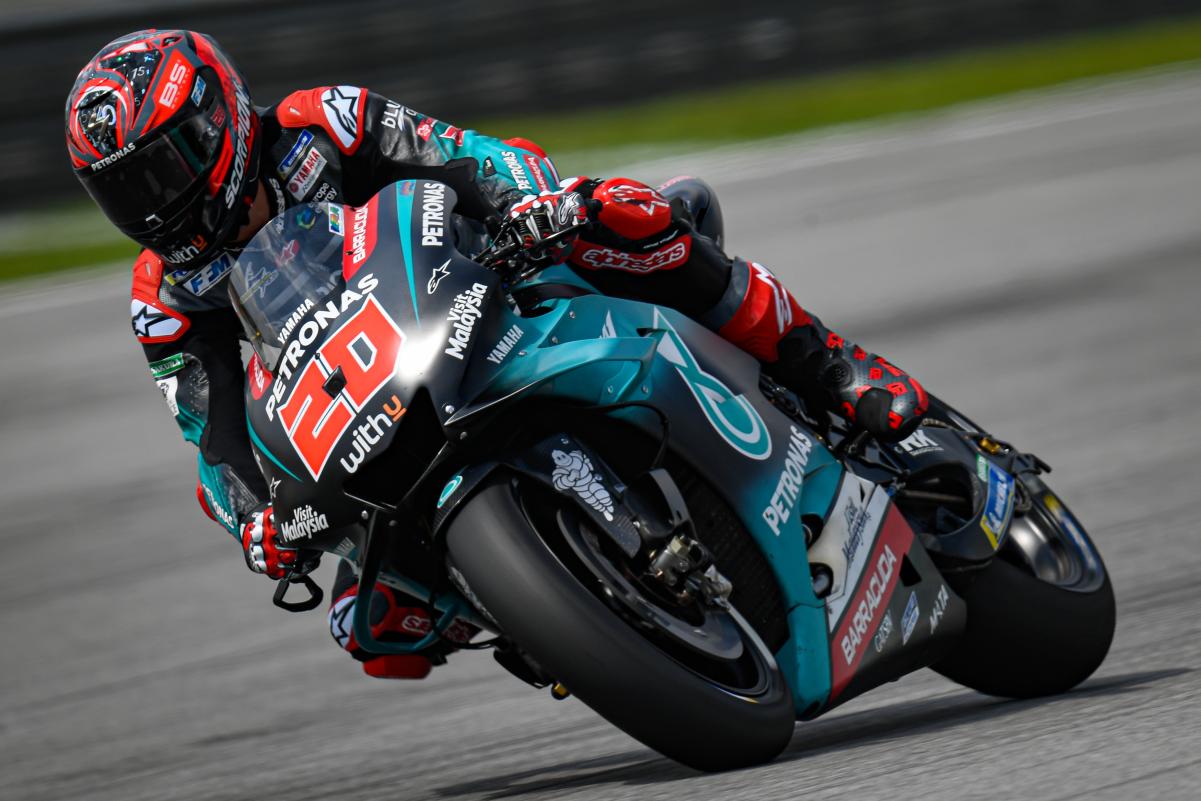 Fabio Quartararo confirmed his very good start to the weekend on the Sepang circuit, with once again the record of the track, he has largely beaten in EL2.

It is very hot in Malaysia when begins the second free practice session of the Malaysian GP! Temperatures reach 34 ° C in the air and 52 ° C on the track as the drivers start for 45 minutes of testing. The latter unfolds, like the rest of the weekend, without Miguel Oliveira, who threw in the towel following the EL1 this morning, wrist pain being too important for the Portuguese driver.

After a first record reached this morning by Fabio Quartararo, the first laps remain at a relatively high pace, almost everyone approaching the 2'00 during his first loop on a white-hot track. Álex Rins takes the first reference, in 2'00 "720. The Spanish driver constantly improves his time in the following laps, before triggering the timing cell after 2'00" 232 passed around the Sepang. Rins beat Morbidelli, Márquez, Quartararo, and Zarco after the first ten minutes.
Read also:

Maverick Viñales chose to go back to the pits after two laps with a medium-hard ride. Marc Márquez improved the best time by a few thousandths, in 2'00 "215 with a soft tire in the back, the preferred choice of the plateau. Most of the drivers are equipped with the medium tire at the front, except Andrea Dovizioso , who started with two soft tires, while Fabio Quartararo continues to have the best time in the first three sectors, but he loses enough in the last two straight lines to sign only the fourth overall time.

Only one change came in the top of the standings after 20 minutes, with Andrea Dovizioso's incursion in fifth place, in place of Johann Zarco, downgraded to sixth. It is at this moment that several drivers decide to go through the pit lane to change some settings, under a very threatening sky. The chances of thunderstorms being high for this Saturday, we must hope for those who completed the EL1 outside the top 10 they can enjoy a dry track to try a time attack.

Valentino Rossi improves his personal brand to be in the third position, while the Quartararo syndrome continues. The French driver continues to be the fastest on the first three-quarters of the Sepang circuit, the last one failing him. Maverick Viñales was the first to dislodge Marc Márquez from the top of the standings in the last quarter of an hour, while remaining above two minutes (2'00 "198), and he managed to get under that bar in the next lap, with 1'59 "845. The Yamaha rider is the only one to stay on the track while all the others or almost come back to the box ten minutes from the checkered flag.
In the last moments of the session, Franco Morbidelli confirms his very good disposition to take the best provisional mark in 1'59 "502. However, it was not counting on the new record holder of the Sepang lap since this morning, Fabio Quartararo The Frenchman is the first driver to go under 1'59 today (1'58 "576), clearly putting everyone in agreement!

The improvements follow one another under the checkered flag, with Andrea Dovizioso taking second place behind Quartararo. Rossi is third, ahead of Morbidelli, Miller, Aleix Espargaro, Crutchlow, Bagnaia, Viñales, and Rins. The only 13th of the session, Marc Márquez manages to stay in the top 10 times combined thanks to his time in the Free Practice 1. The Spaniard is ahead of Johann Zarco, who fell in the last moments of the session, at the first corner. 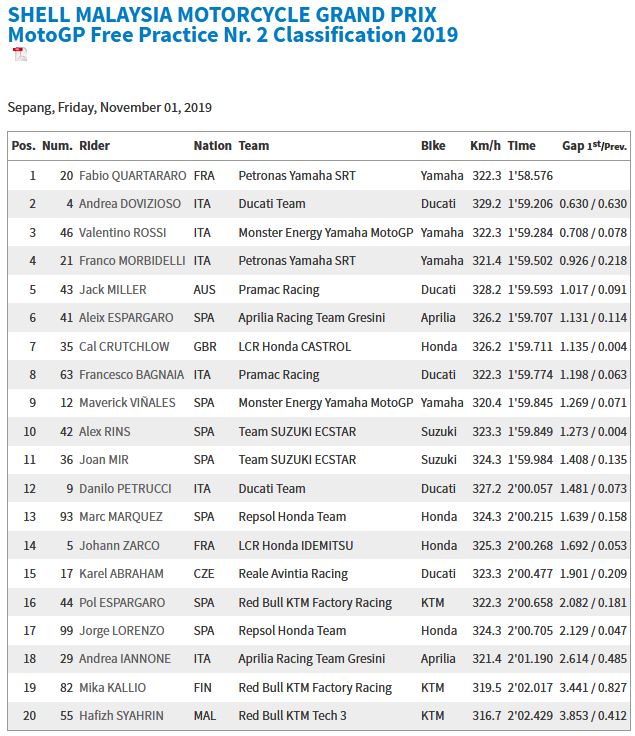