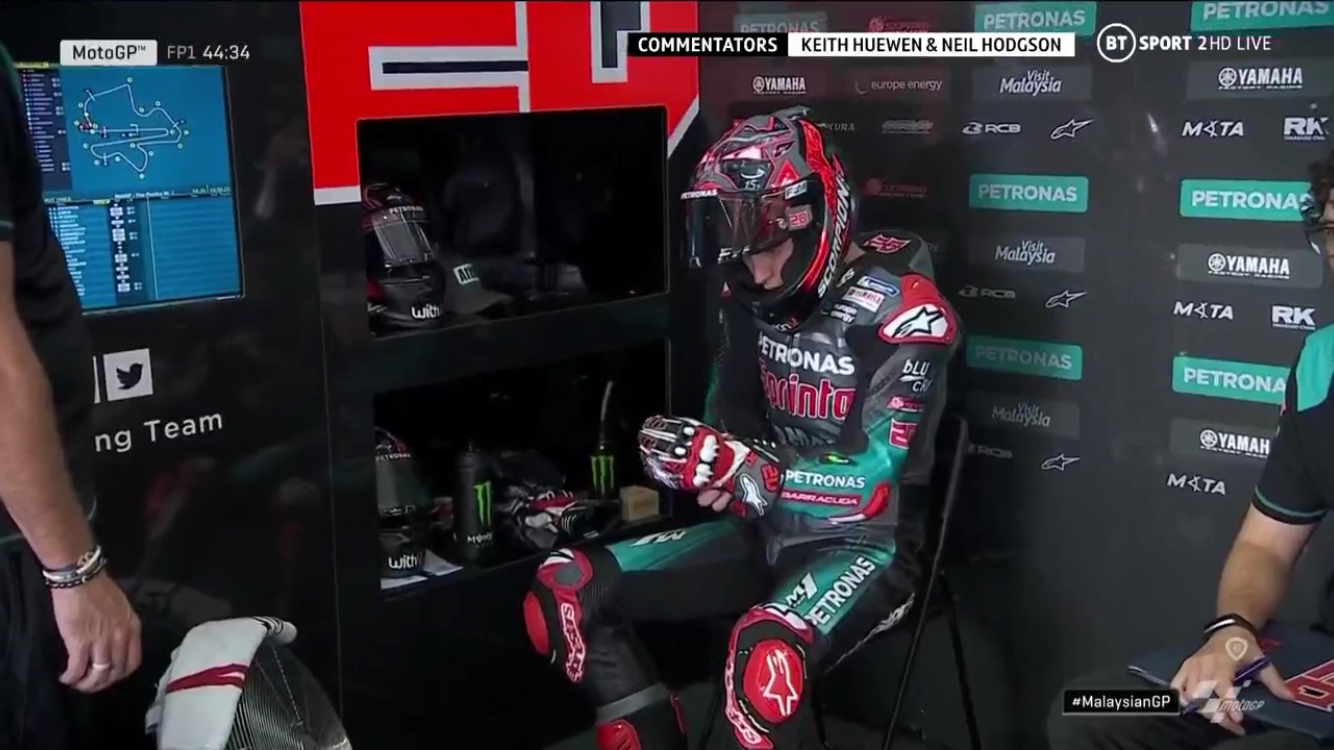 The best lap of a MotoGP Grand Prix at Sepang was in 2015, yet it did not hold up in the first free practice session of the Malaysian race on Friday morning. A session that saw Fabio Quartararo become a leader, with little regard for his ankle injury.

At 10:50 on Friday, the thermometer was already 32°C when the MotoGP engines went wild, ringing the kickoff of the first free practice session. Resurfaced in several corners, the Sepang track awaited the machines of the queen category for 45 minutes of the first contact and it did not disappoint, with times promising a weekend of the most competitive for this before -Last Grand Prix of the season.

This first session gave pride of place to the Petronas team, favorite of the public for its home test. But it is more generally the Yamaha drivers who have distinguished themselves, and this from the first minutes. Indeed, from the third lap completed by the entire plateau, surprise, the two Yamaha official drivers have reached the top of the timesheet with an identical time of 2'00 "570.

In the next round, Maverick Viñales took the lead in 2'00 "373, before Valentino Rossi was also repulsed by Franco Morbidelli and Marc Márquez, but the # 93 would soon have to return to the idle stand, he who was immediately illustrated by several amazing tightrope numbers.

Viñales continued to improve the benchmark and was the first to go under the two-minute mark on his ninth lap. His time of 1'59 "955 was already faster than the record set in the 2015 Malaysian track. Had the Yamaha rider taken a good lead, Álex Rins had reduced it a bit by signing a time trial. 2'00 "286 which allowed him to stand in front of Márquez.

Although still in trouble with his injured ankle a week ago in Australia, Fabio Quartararo was quick to come to mingle with the first places. Present in the top 5 before entering the money time, the French has been able to take advantage of the time attack at the end of the session to confirm that his ankle, at least on the tour, would be a detail.
A tour in less than 2 minutes

The fresh tires mounted in the last minutes first gave a boost to Rins, Morbidelli, Rossi, but also to Aleix Espargaró, until then 11th. First to beat the reference set by Viñales, Rossi posted a new best time of 1'59 "893, soon beaten by the Aprilia driver (159" 854). But the Quartararo stratospheric tour in 1'59 "193 quickly overshadowed these performances.

Moments after his team-mate, Morbidelli took the lead with a time of 1'59 "110. In the process, Rins improved his own time in 1'59" 546, which placed him in third place . Viñales, however, took the lead over the Suzuki with a final lap in 1'59 "218. Andrea Dovizioso then climbed to the top of the standings, as did Márquez. Checkered flag was already out, the Repsol Honda rider demoted Rins one last time and positioned himself a hair in front of the Ducati # 4.

But at the top of the hierarchy, the last word returned to Quartararo with a final improvement. With a time of 1'59 "027, the French driver was faster than Sepang's all-time record in the Grand Prix, set in qualifying in 2015. The unofficial record of 1'58" 239, signed in private practice, should not last long if the weekend continues at this rate!

The positions will be watched closely this afternoon, as the MotoGP riders will play a second session of 45 minutes, as the risk of thunderstorms hanging over the Sepang circuit for Saturday morning could mean that direct entry to Q2 will be Already acquired today for the drivers in the top 10. For the moment, Cal Crutchlow has its place, as Jack Miller, however Joan Mir or Danilo Petrucci will have to do better. No KTM is also in the top 10 for the moment, nor Johann Zarco, currently 16th. As impressive as it is, it will complete the lap in less than two minutes, at least, to pull out of the game this weekend.

Wrong in his wrist in the violent fall he suffered last Saturday in Australia, Miguel Oliveira has, as expected, completed a few laps early in the session to assess his condition. The verdict was quick to fall: the pain was too great for the Portuguese to continue the session, and a decision will be made shortly on his commitment on this weekend. Tito Rabat is absent this weekend, eager to rest too a wrist injured before the last Grand Prix of the season in Valencia. 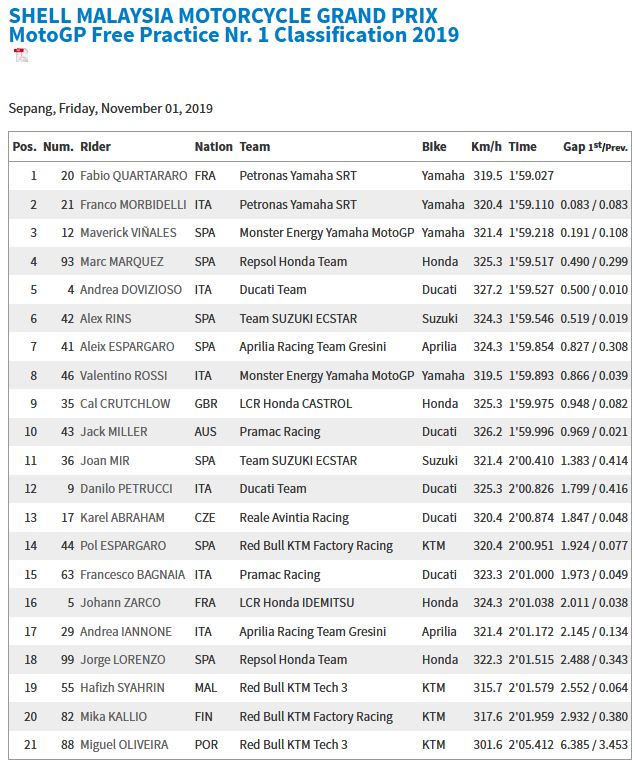