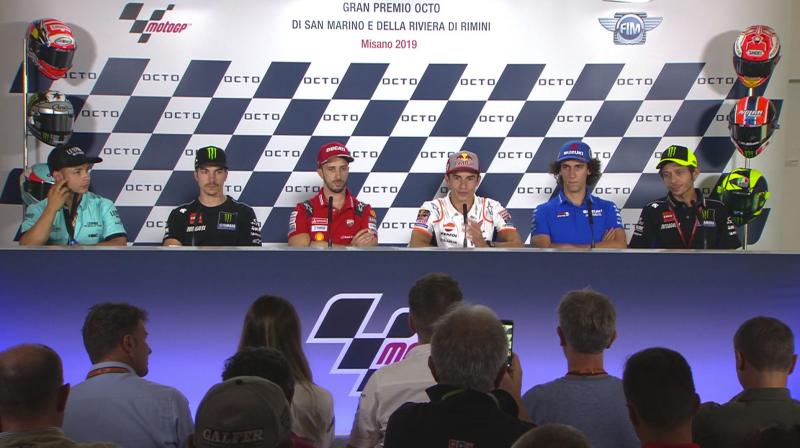 Yamaha Favorite? Rossi and Viñales spoke in the Press Conference about their positive feelings from the test as the riders gear up for Round 13

As usual, the riders previewed the weekend ahead and one thing became apparent: are Yamaha the ones to beat? The Misano Test – on paper – was a very good one for the Iwata factory and both Rossi and Viñales said they are heading into the San Marino with good feelings on board their machines.

“I feel really good on the bike and especially with myself,” said Viñales, when asked about his recent run of form and how the test went. “Confidence is really high, we'll try to push the maximum, try to keep a good level all weekend and during the race be at the front. The test has been really successful for me so we will try to do our best.”

‘The Doctor’, fresh from the incredible scenes of riding his Yamaha through the streets of his hometown of Tavullia, echoed his teammate's comments. “For sure here in Misano it’s always a special Grand Prix, it’s really the home Grand Prix. In the last races I was a bit better but in Silverstone after a solid weekend, in the race I wanted to fight for the podium but I was not strong enough. So we will try another time here. We did some test, important test, my pace was quite good, I feel quite well with the bike so we try, we are ready and we will see if we are strong enough to fight for the podium.”

Positive comments from the factory boys. And it was rookie sensation Fabio Quartararo (Petronas Yamaha SRT) who topped the times at the test, with teammate Franco Morbidelli also going well as the quartet all sat inside the top five. Of course, drawing conclusions from test times is naive, but Marquez acknowledged that Yamaha are set to be a threat this weekend.

“Misano test was quite interesting, we will check this weekend. Race pace was not so fast compared to last year but we were competitive, especially Yamaha riders were very fast,” commented the seven-time Champion.