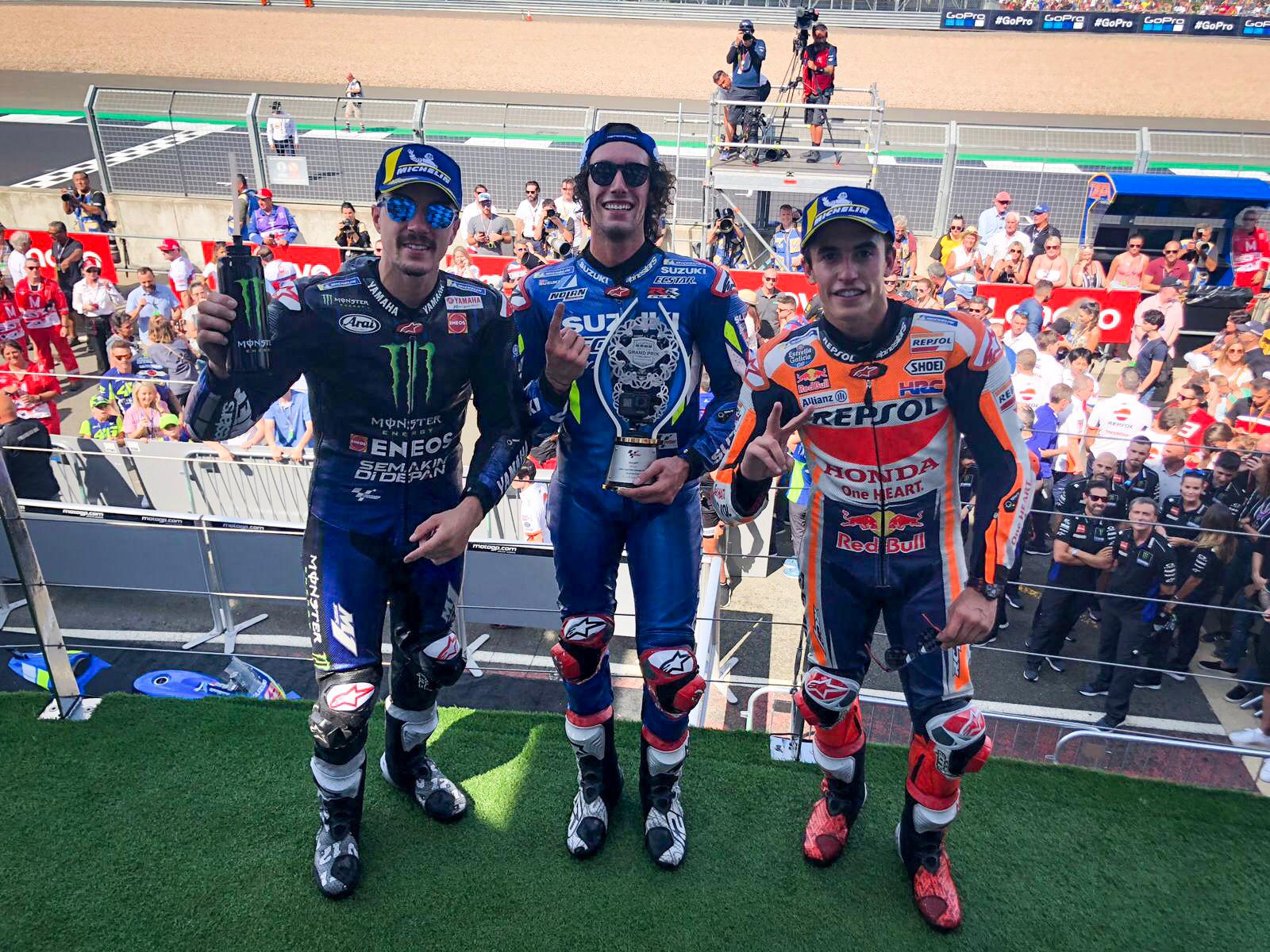 Alex Rins (Team Suzuki Ecstar) claimed a sensational victory at the GoPro British Grand Prix as he and Marc Marquez (Repsol Honda Team) treated us to a phenomenal MotoGP™ race, the Suzuki man eventually beating the Honda rider to the line in a stunning finish. Maverick Viñales (Monster Energy Yamaha MotoGP) picked up P3 but there was drama at the first turn involving Fabio Quartararo (Petronas Yamaha SRT) and Andrea Dovizioso (Ducati Team).

Silverstone was set for a barnstormer, but nobody saw what was coming at the first corner. The lights went out and heading into Copse for the first time, Quartararo’s back end slipped round as the Frenchman reacted to Rins getting out of shape in front of him. Quartararo crashed and unable to take avoiding action, Dovizioso collided with the stricken Petronas Yamaha as two leading race contenders crashed out on Lap 1. Dovi headed to the medical centre for a checkup after landing heavily and was later transported to Coventry hospital, confirmation that Dovi has no broken bones, but he needs further checks after taking a big knock to the head.

Meanwhile, Marquez had got away well from pole and was leading the race from second place Valentino Rossi (Monster Energy Yamaha MotoGP), with Rins third. The latter didn’t take much time to pass ‘The Doctor’ though and the number 42 slipped into second, with himself and Marquez slowly edging clear of Rossi in third. On Lap 4, the leading duo were over a second clear, with the gap to Rossi stretching lap by lap as Viñales smelt blood on his teammate. Lap 6 ticked by and Viñales pounced, passing Rossi down the Hanger Straight but at this point, Marquez and Rins were over two seconds up the road.

Rins was locked onto the tailpipes of Marquez. Sector 1 and 3 looked like the areas where Rins had an edge on the number 93 and on Lap 8, the Suzuki was leading. Coming up the hill from Copse, Marquez sat up slightly to seemingly tell Rins: ‘go on then, you can lead for a bit.’ That didn’t last long however, Rins was wide at Stowe corner and it was Marquez who had the baton once more. There was nothing to separate the pair, with Viñales flirting around the 1.5/2 second margin behind.

With four laps remaining, an error. On the exit of the Vale chicane, Rins was out the seat. This dropped Rins 0.6 back to give Marquez some breathing space but would it be the turning point of the Grand Prix? No. Rins reeled in Marquez by the end of the lap as we set ourselves for a tense final three laps. In the meantime, Viñales was still hovering at 1.5 seconds back.

On the penultimate lap, Rins made a move stick. A unique one too, the GSX-RR dived under the RC213V at Turn 15 but immediately, on the Wellington Straight, Marquez blasted back past. Last lap time, nothing between them. But a Yamaha rider was now just 0.5 back from Rins – surely Viñales couldn’t claw this back? A little further down the road, Marquez was on the defensive. Heading into Sector 3 – a place Rins had been strong all race – the Repsol Honda was holding the tight line. No way through at The Loop for Rins, but would Marquez’ run onto the straight be hampered? Seemingly not. Marquez held it into Brooklands – the last real overtaking spot – but Rins was strong round Luffield and through Woodcote. The lap previous saw Rins get alongside Marquez round the outside at the finish line – Roberts and Sheene esque from 1979 – but was ran wide. At the final corner, Marquez knew Rins had the advantage and tried to cover it off. The Repsol Honda had a slight twitch on the rear as Rins took a wide, sweeping line on his Suzuki and spectacularly won the race to the line to win by just 0.013! Later on, Rins revealed he thought it was the last lap on the penultimate lap... 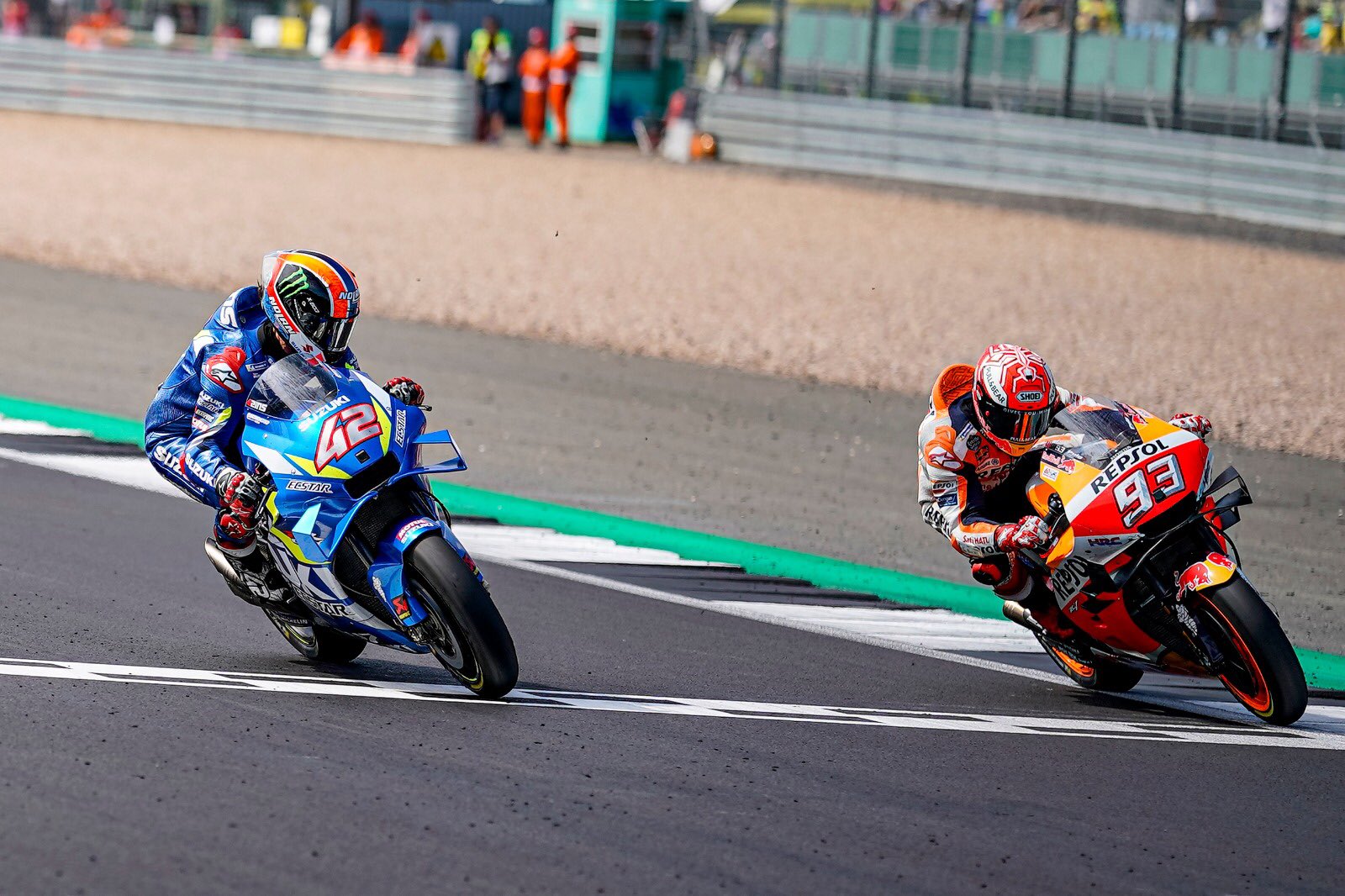 Viñales was close, but not close enough to challenge in third. Rossi’s dreams of a return to winning ways faded as the race went on but nevertheless, ‘The Doctor’ will take the positives from another P4. Franco Morbidelli (Petronas Yamaha SRT) had his mentor in sight but couldn’t quite hunt him down, a top-five for the Italian equals his best MotoGP™ result. Home hero Cal Crutchlow (LCR Honda Castrol) takes a P6 away from Silverstone after starting from ninth, the Coventry-born rider held off a late charge from Danilo Petrucci (Ducati Team) and close friend Jack Miller (Pramac Racing). The Ducatis finished seventh and eighth respectively, as Pol Espargaro (Red Bull KTM Factory Racing) had the trio in his sights to land KTM a top 10. And completing the top 10 was Aprilia Racing Team Gresini’s Andrea Iannone – the Italian claiming his best result on board an RS-GP.

A dramatic British GP ends with Rins on top of the world once more. 40 years on, the Suzuki man was able to do what MotoGP™ Legend Sheene couldn’t – pass a reigning World Champion at Woodcote to win at Silverstone. However, Marquez now sits 78 points clear in the Championship standings with Dovizioso’s early exit as we look ahead to San Marino. 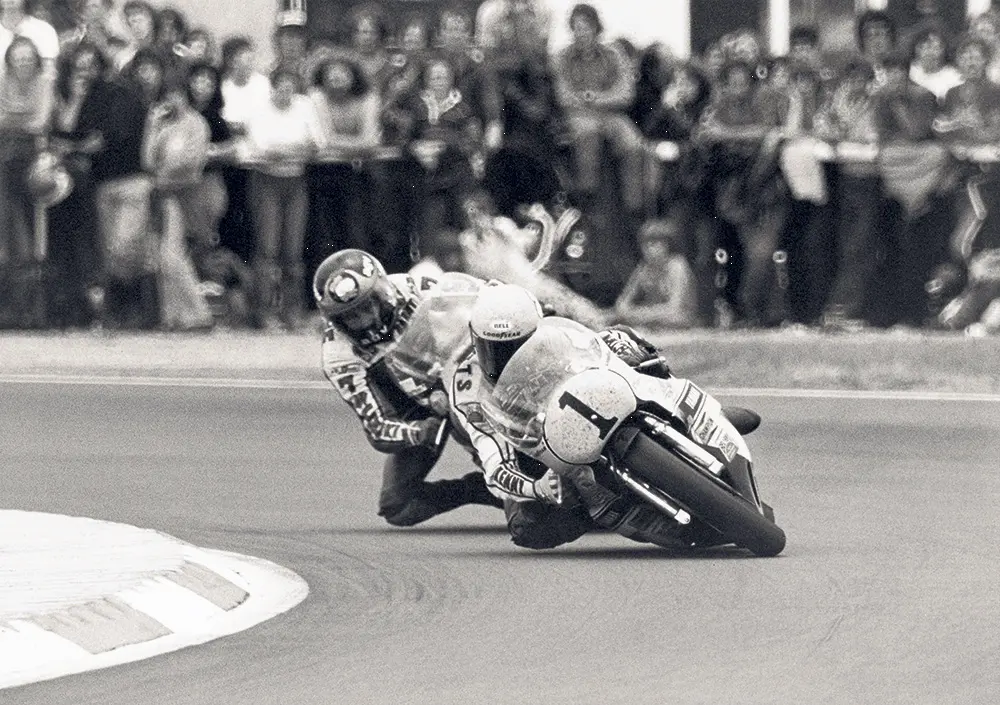 1979 British GP: Kenny Roberts and Barry Sheene will fight to the Line

Viñales, Rossi, Morbidelli: three M1s inside top five... Despite Quartararo’s early exit it was a strong day for Yamaha riders at Silverstone, but ‘The Doctor’ was left wanting more

Sunday may have belonged to Alex Rins (Team Suzuki Ecstar) but the GoPro British Grand Prix saw Yamaha riders claim three of the top five positions, with Maverick Viñales (Monster Energy Yamaha) completing the podium just a whisker away from Rins and Marc Marquez (Repsol Honda Team).
Viñales did a good job of closing the leading duo down in the latter stages of the race, with the Spaniard claiming P3 to take his Silverstone premier class podium tally up to three from his last three races in Britain. How did the number 12 feel after a solid performance?
“I was closing the gap lap by lap by just one or two tenths. It was a little and a little, but I couldn’t close it by a lot in one lap. I tried my best as always, but I think we took the maximum from our bike and more.  With such long straights, this track is really about the engine so we’re happy.
“I think we missed top speed. A little bit of traction too. In many corners I was much faster but in others I was surviving. So, I think we improved the bike a lot over the weekend and that’s the most important.” 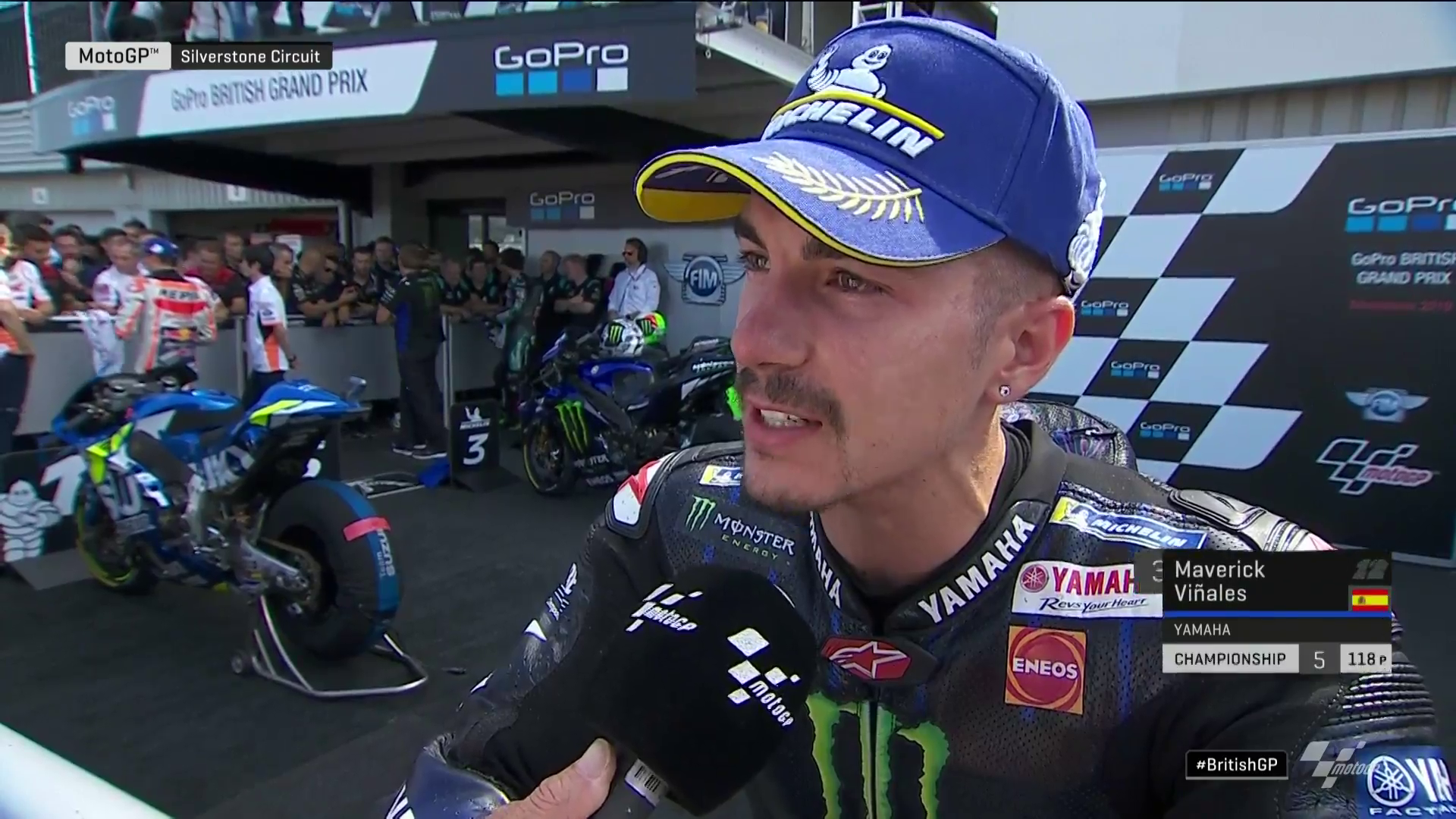 For teammate Rossi, Sunday promised so much. A dream return to the top step was certainly on the cards but having stuck with Marquez and Rins in the opening couple of laps, ‘The Doctor’ soon started to slip back, with Viñales dispatching his nine-time World Champion teammate with relative ease. Rossi explained how he immediately encountered trouble with his rear tyre as a podium battle quickly evaporated.
“It’s fourth place but we are not happy because we expected more. We wanted to fight for the podium because we started from the front row,” said Rossi, who had been looking immense all weekend.
“Especially during the practice, I always had a good pace. But today in the race it was more difficult for me as I suffered a lot with the rear tyre, and from the beginning, I wasn’t as fast as yesterday. In the second half of the race I had to slow down because I had a lot of slides.”
The Misano World Circuit Marco Simoncelli hosts an official two-day MotoGP™ test on 29th and 30th August, and it’s two days that Rossi feels is very important.
“The test will be very important because last year was a very, very difficult weekend. We were slow, so at the test we’ll understand if we can improve. This is so important. Of course, Misano is a special weekend for me with a lot of fans, family, friends. It’s a Grand Prix that you need double the power compared to a normal one. So we’ll try to arrive ready.”

Fortunes didn’t favour Fabio Quartararo (Petronas Yamaha SRT) after the Frenchman slid out of contention at Turn 1. However, teammate Franco Morbidelli managed to notch up his equal best finish of the season in fifth, with the Italian under two-seconds away from Rossi at the chequered flag.

Quartararo had a highside at Copse right after the start, and his Yamaha was then hit by Andrea Dovizioso, who had temporary memory loss after his massive fall afterwards and needed to be hospitalised. The Frenchman explained that his crash occurred because Rins, having passed him, had nearly lost his bike going through the corner right ahead of Quartararo.

In order not to hit Rins, Quartararo "shut the throttle a bit too aggressive", and the Frenchman claimed that without Rins' mistake he wouldn't have crashed. "We did a good start, unfortunately on the first corner, Rins overtook me," said Quartararo. "He lose quite a lot the rear and I shut the throttle a bit too aggressive to not really go into him and I just make a big slide also. Unfortunately I had a highside. "I am okay, quite lucky that I don't have something broken, that is positive. I think Dovi is quite unwell because he had a big crash. "I didn't even see that he touch the bike, he go over the bike, just after when I get up I see he crashed also. "If Rins didn't make a mistake, for sure we keep sliding and just at this moment I was starting to pick up the bike. For me was just a matter of luck that we did not have." British GP winner Rins said that his first-corner moment nearly ended with a crash of his own, saying: "First corner I was so close to crash, I don't know if it was for the cold tyre or what - but anyway I was able to recover.

The British GP was eventually decided between Rins and Marquez and Quartararo reckoned that his own pace from the weekend was "really good to fight with them". "During the morning with 16 laps on the tyre we make [1m]59.6s, that is something that was really good for us. The pace was really good but during the race is difficult to know if we had an opportunity to win. "If we check on papers, the pace was really good for fight with them [Marc and Rins]." Ducati team manager Tardozzi, whose rider Dovizioso was the other victim of the start crash, further elaborated on the condition of the rider, who suffered from temporary memory loss after the crash.

"Andrea now is going with helicopter to Coventry because they would like to make scan. For a couple of minutes, 15-20 minutes, he lost the memory. "Finally he remembered everything - in the beginning he said he made a big fault, then he said no, he started to think and he says 'oh, was not my fault'. "We start to joke a bit but anyway the medicians [doctors] would like to make these scans to be sure. He has pain on the right side of the hip but finally is nothing broken. "We'll what the scan say tonight and I hope that he will be in Misano for the test." The Misano test will begin in four days' time, on 29th and 30th August.