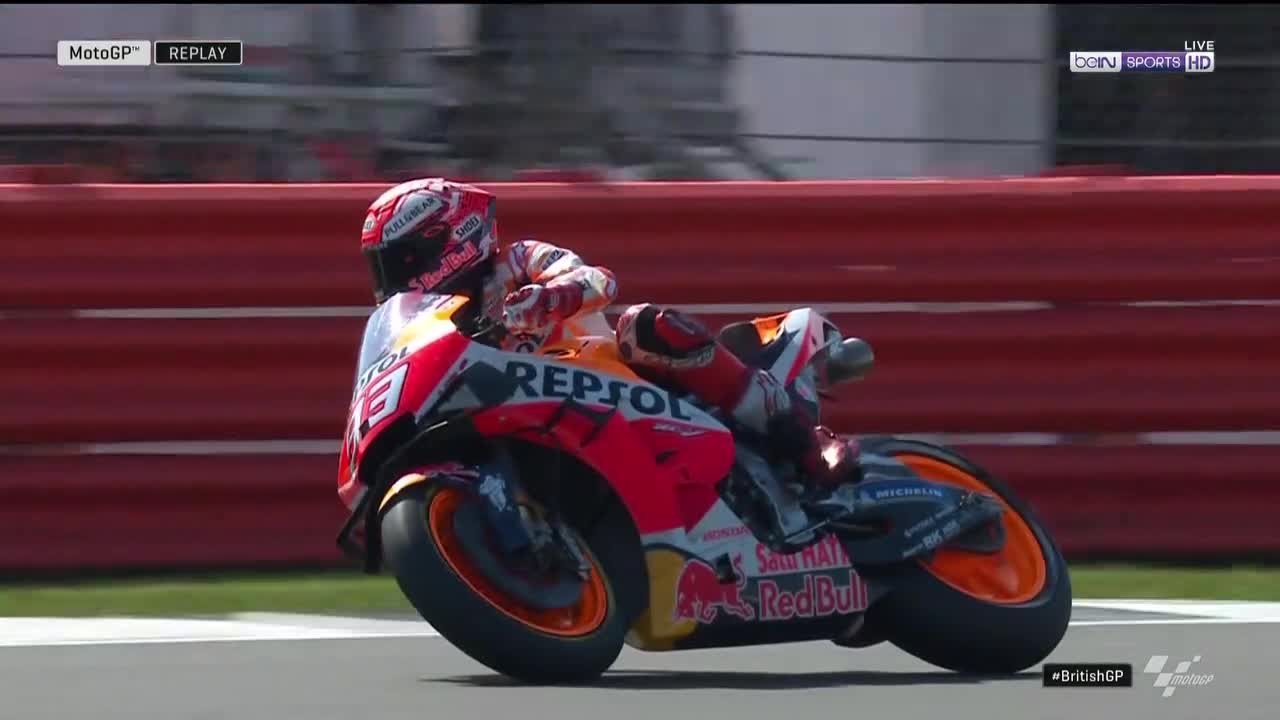 After a Q1 where Andrea Dovizioso and Alex Rins were promoted to Q2, Marc Marquez and Valentino played Fox and Chicken; Cat and Mouse or Whatever we call it... Said that Valentino Rossi has been"OutFoxed" 😂. Seven-time and nine-time Champion’s go head-to-head as pole position is decided on the final flying lap

Q2 got underway in stunning Silverstone sunshine and the pace on track was scintillating. A number of riders decided to scrap their first flying laps as there was plenty of traffic as riders searched for a tow. These included Ducati Team’s Danilo Petrucci and Andrea Dovizioso, the latter coming through Q1, home hero Cal Crutchlow (LCR Honda Castrol) and Alex Rins (Team Suzuki Ecstar). However, one rider who didn’t ditch his first run was Marquez and the Championship leader slammed in a 1:58.6 – his best lap of the weekend. Maverick Viñales (Monster Energy Yamaha MotoGP) then slotted himself into P2 with a lap time 0.4 away from the number 93, but a MotoGP rookie was about to pounce. Free Practice star Fabio Quartararo then placed his Petronas Yamaha SRT into P1, 0.055 faster than Marquez’ time as a Quartararo vs Marquez qualifying duel started to form.

So ‘El Diablo’ led the way after the first set of runs but as he entered the pits ahead of his second run, he seemed to point out an issue with his number one machine. Meanwhile, Dovizioso led the way round the for the next set of quick laps and he was on it. Q1’s fastest man was setting red sectors but couldn’t quite hold it in the last split, Dovi went provisional P3. 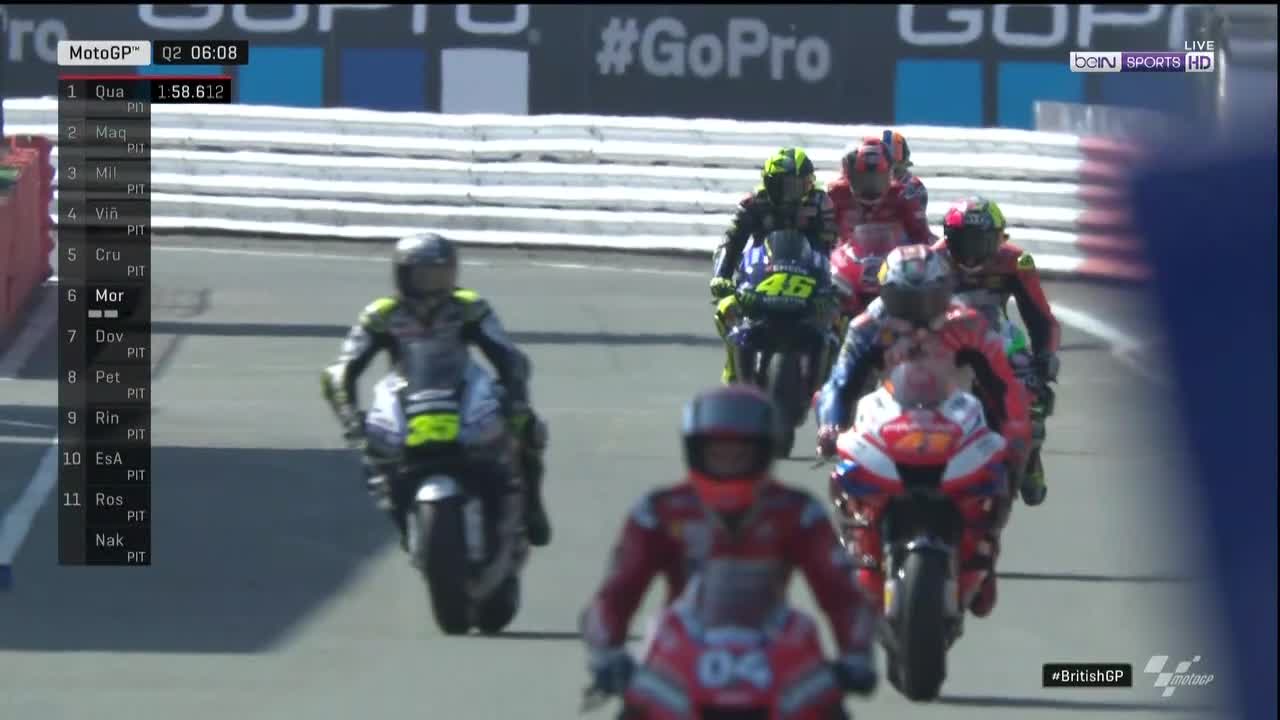 Coming out the pitlane, Rossi needed a lap time after having his maiden lap cancelled for track limits. ‘The Doctor’, Marquez and Miller came out of pitlane at the same time as a cat and mouse game proceeded on the out-lap – no one wanting to lead and do the dirty work out front. Crutchlow was on a session best lap but it would be no dream home GP pole position for himself and the British crowd, the number 35 tucked the front and slid out of contention at Stowe. Further up the road, Viñales was on a stormer as he led Rins and a whole host of other riders. But would the Yamaha man take pole off Quartararo? Not quite, he went to P3 but immediately got displaced by Rins behind him. Quartararo was also going faster but the Petronas man couldn’t move the goalposts further as he took the chequered flag – it was the 20-year-old’s time that needed to be beaten if someone was going to take pole.

Rossi, Marquez and Miller pretty much ground to a halt on the Wellington Straight as the trio waited to see who would lead. Needing a lap time, Rossi had to go, as Marquez and Miller slotted into Rossi’s tow. And it was a good tow. All three were up in the first sector, and the second, and then the third – Marquez it was that was under Quartararo’s time by the most though, 0.4 his advantage coming into the final section. Heading through Luffield, all three riders were still on for pole. Rossi rounded Woodcote and went P1, but Marquez immediately knocked the 40-year-old down to P2 as Miller made sure he would line up on the front row – Quartararo would have to settle for fourth as Miller and Rossi edge the rookie out. 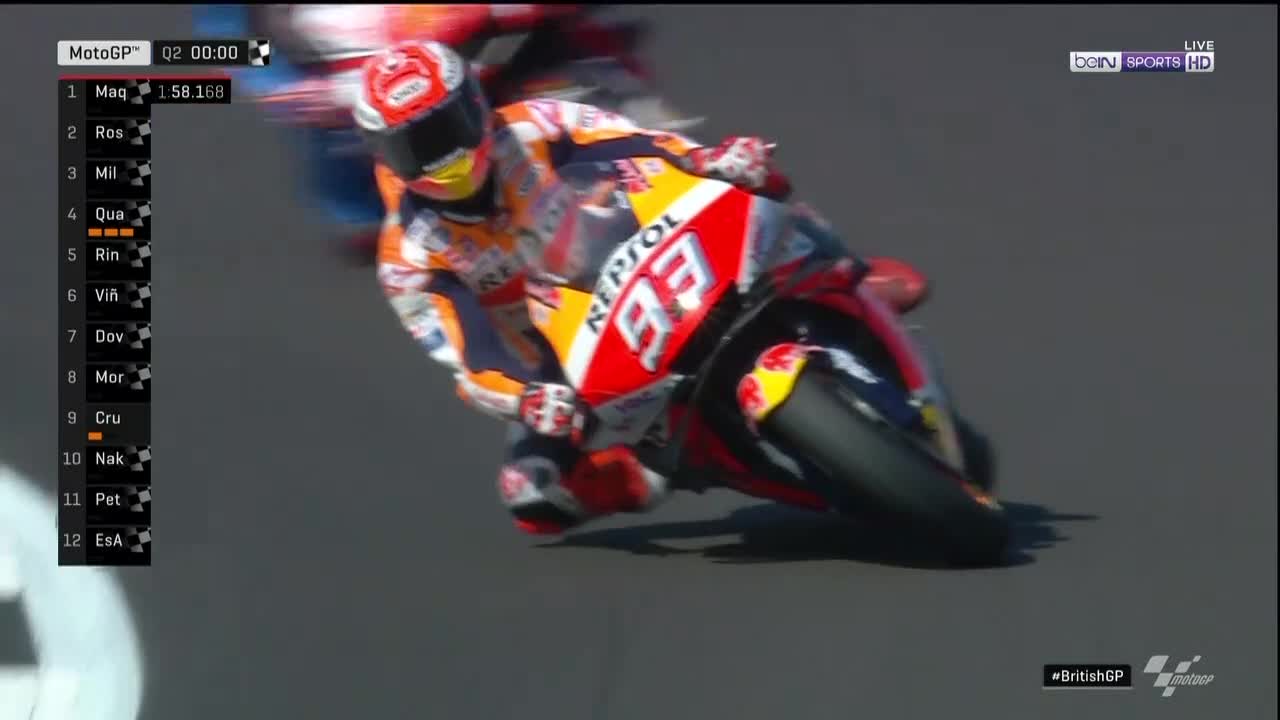 A quite magnificent session ends with Marquez taking his 60th pole ahead of his 120th start on Sunday, with his gap over his rivals sitting at 0.428 – but it won’t be that come Sunday. Rossi claims his first front-row since Austin after looking incredibly strong all weekend and Miller leads the Ducati charge. Quartararo was disappointed with fourth but his victory challenge is by no means over from there, the rookie sensation heads Rins and Viñales on that second row, the Suzuki man claiming a very important P5 after contesting Q1.

Dovi will have been looking for a bit more than P7 but having progressed through Q1, the Ducati man will be confident he can mount a challenge from there. Fellow Italian Franco Morbidelli (Petronas Yamaha SRT) will launch from P8, his best grid slot since Germany, with Crutchlow’s crash costing him a shot of the front row – P9 for the Brit. His teammate Takaaki Nakagami (LCR Honda Idemitsu) closed out the top 10 and will spearhead the third row of the grid, the Japanese rider sits ahead of Petrucci and Aleix Espargaro (Aprilia Racing Team Gresini). 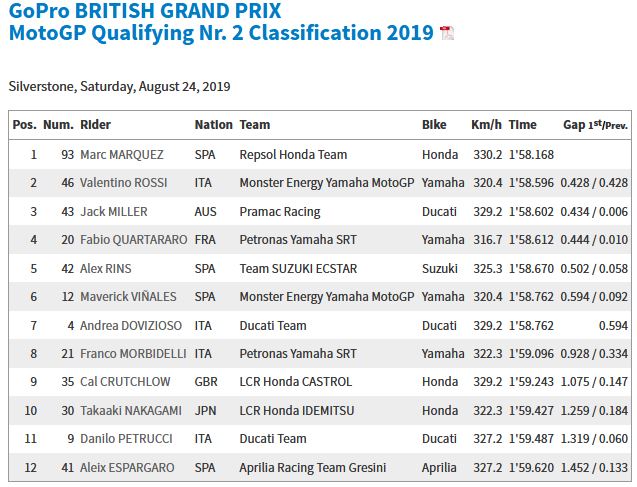 Q1:
Dovizioso and Rins avoid Silverstone surprise to move to Q2. The factory Ducati and Suzuki duo will join the fight for pole position in Q2

Ducati Team's Andrea Dovizioso and Team Suzuki Ecstar's Alex Rins both managed to avoid a Silverstone shock at the GoPro British Grand Prix by making sure they progressed through from Q1 and handed themselves a shot at pole position in Q2. 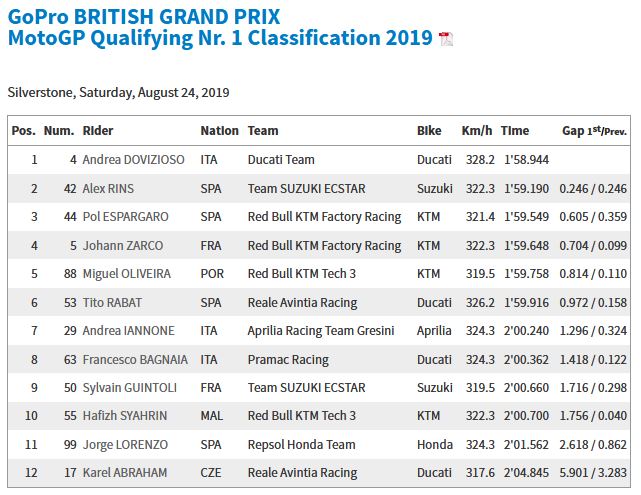