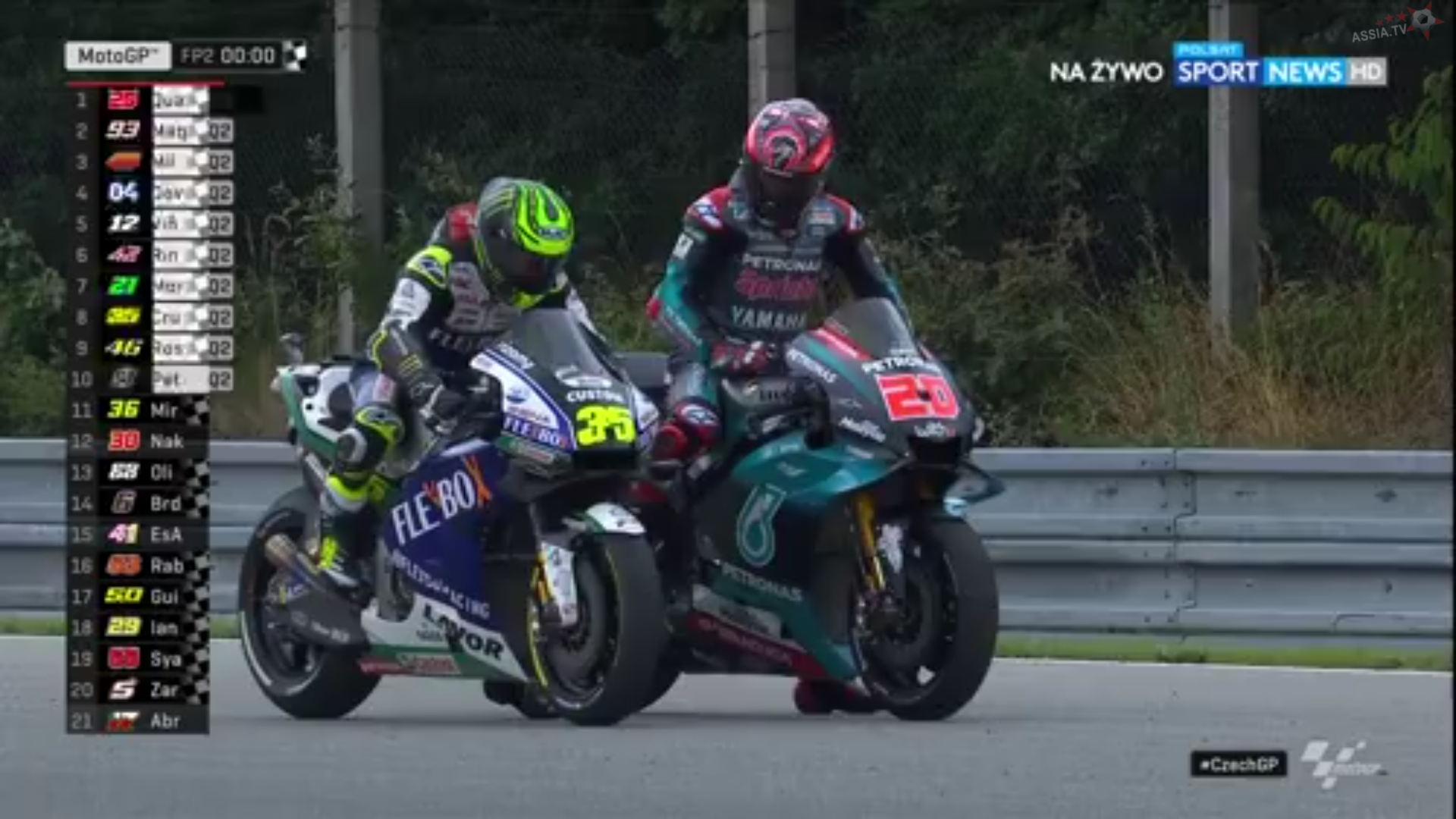 Fabio Quartararo (Petronas Yamaha SRT) had been quiet for most of Friday’s action at the Monster Energy Grand Prix České Republiky but a late flyer from the flying Frenchman saw his snatch P1 from Marc Marquez (Repsol Honda Team), with Jack Miller (Pramac Racing) and Andrea Dovizioso (Ducati Team) setting identical times in P3 and P4.On the wait in FP1, Fabio Quartararo finally traced his way to Brno. The tricolor finishes the day Friday at the top of the pack MotoGP.

He struggled in the first free practice session, but with the soft tires, Fabio Quartararo (1st) made everyone agree. At the end of FP2, the Yamaha driver went for the best time of the day in 1'55.802. It's better than the FP2 in 2018, and better than Marc Marquez (2nd) relegated to 23 thousandths. Once again, both men lead the trials.
In third place, Jack Miller (3rd) takes the place of first Ducatiste in front of Andrea Dovizioso (4th), who made ... exactly the same time! Long ahead, Maverick Viñales (5th) finally closes the top-5 in front of his Spanish compatriot Alex Rins (6th).
Yamaha can have a smile because the four M1 are in the top-10 since Quartararo and Viñales, Franco Morbidelli (7th) and Valentino Rossi (9th) have done well. The Doctor was the victim of a mechanical breakage but finally saved the furniture, because the cumulative FP1-FP2, he is in the top-10.

The wild card this weekend, Sylvain Guintoli (17th) is doing well. It's complicated for the KTM drivers because the best (Miguel Oliveira) finishes only in 13th. Johann Zarco (20th) has progressed compared to the FP1, but this is far from the best. We saw a Pol Espargaro (22) very recovered well when returning to the box.

That would all change in the last 10 minutes though. The soft tires were put in and Marquez stuck his Repsol Honda top of the pile, with the likes of Takaaki Nakagami (LCR Honda Idemitsu) and Miller improving just before the reigning World Champion went quickest. Riders such as the fourth place in FP1 Miguel Oliveira (Red Bull KTM Tech 3) and fifth place on Friday morning Sylvain Guintoli (Team Suzuki Ecstar) were holding top 10 spots at the expense of some big names. But then, a certain rookie sensation was on a roll.

17th place Quartararo set the timing screens alight and went P1 ahead of Marquez, somehow finding 1.7 seconds from his previous best lap. The 20-year-old, who finished 18th in FP1, would hold P1 as the session ended, with Crutchlow, Rossi and Petrucci all putting in late personal best laps to earn top 10 positions – how crucial could that be?

Viñales completed the top five behind Quartararo, Marquez and the Ducatis of Miller and Dovi, 0.282 separating those guys, with Rins sitting sixth. Petronas Yamaha SRT’s Franco Morbidelli jumps up one place from his P8 in FP1 to P7 in FP2, with Crutchlow taking eighth on Friday afternoon – a big improvement from the Brit who managed 15th in the morning. Rossi recovered from his mechanical issue to place ninth, one place better than his FP1 effort, Petrucci climbs three places to P10.