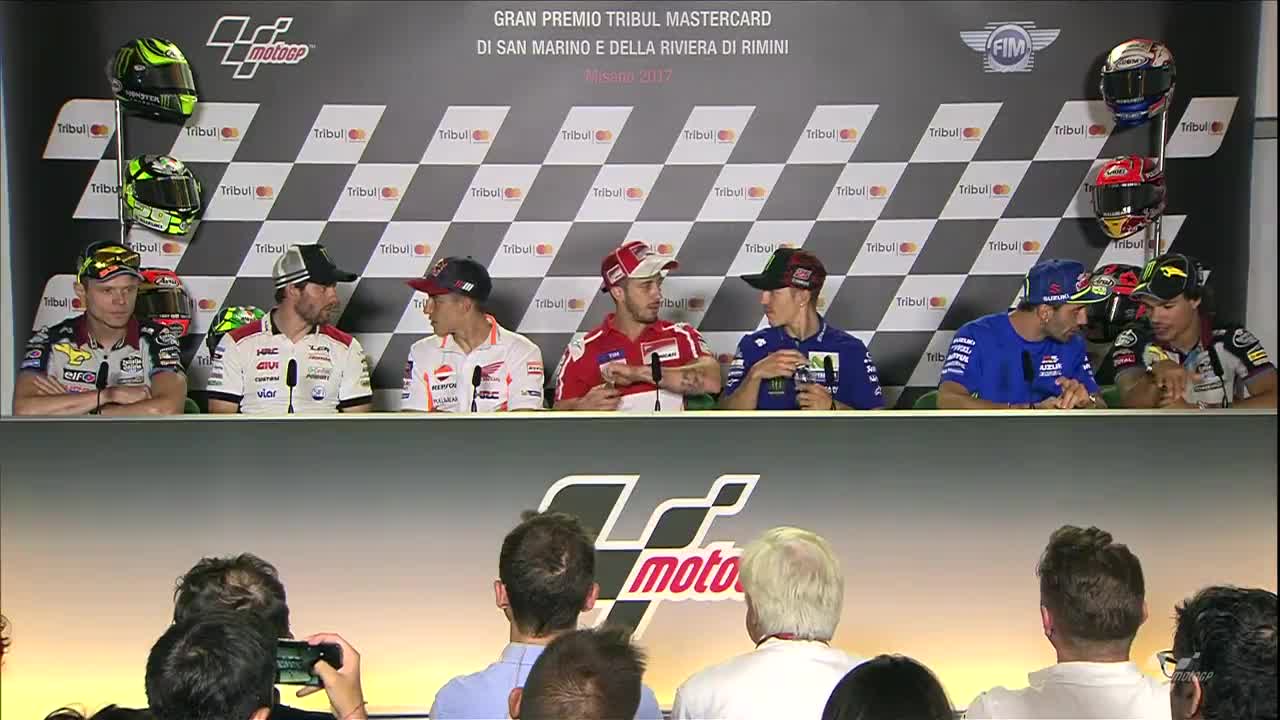 First to speak was points leader ‘DesmoDovi’, and the Italian says that arriving at Misano at the top seems ‘unreal’: “To be at my home GP at Misano and leader of the Championship is something we didn’t expect and unreal. I’m so happy about that, today when I drove from home the feeing was really good, and a new feeling. We’re really happy to be in this position but the Championship is very open. Unfortunately, Valentino isn’t here and that isn’t nice. There’s one less competitor but they’re really strong and I think it will be a nice battle to the end of the season. Our goal is to be on the podium, we never were here and we know on paper it’s not a good track for our bike, but this year already we’ve had good results where that was true. We have to try and manage the weekend like the last two - like in Silverstone we weren’t fastest before the race, but we did everything perfect for the race.”

Marquez was another who was strong in the British GP, but the race didn’t quite come to the same end as the rider from Cervera suffered a mechanical DNF. Keeping the same approach and mentality is Marquez’ goal in Round 13 – where he has a few good memories and the team recently had a good test: “Silverstone wasn’t the best finish, especially because that weekend I felt really strong. But now we’re in Misano and we want to keep the same mentality and the same level. We did a test here two weeks ago and I felt really good and was riding well, so we’ll try to understand the conditions and the grip, and try to improve session by session. Misano has been a good circuit in the past with good memories and moments, and we’ll try to finish on Sunday in the best way to make another good memory. It looks like the weather will be unstable, when in Silverstone it was so good and it looks like in Misano the weather will be tricky! But we’ll try to adapt. We know that in the dry and the wet our level is good so we need to go out convinced we have a good opportunity.”

The Movistar Yamaha Team and Maverick Viñales also tested at Misano ahead of the British GP, and Viñales says the positive results of that test were borne out by the results at Silverstone. As ‘DesmoDovi’ looks to defend, Viñales will be on the attack: “Silverstone was really good, I was feeling great and especially in the last laps. I pushed 100% and the bike was there. We recovered a lot of feeling at Silverstone and that’s good motivation. The test here was really good, especially with the electronics, and we’re convinced we can have a good weekend. For sure it’s a shame that Valentino is not here, especially since it’s his home track and he’s fast here. It was also interesting to us to compare data to improve, but we’ll try to reduce the gap in the Championship and start well on Friday.”

Cal Crutchlow came into the weekend with a slightly different headline to some – slicing a tendon in his hand and requiring some surgery. But he’ll be riding, and the LCR rider explained the mishap…

“Cutting parmesan is a dangerous thing. I wish I could give you a story, like I had to fight a bear or something good, but no. I don’t cook, I’m a terrible cook. But I was cutting the cheese, the knife came out the cheese and went into my finger. I didn’t think too much of it, went to bed no problem, but it was still bleeding…the doctor said go to the hospital. They reattached the tendon, it was a bad day on Monday but I managed to ride on Tuesday in Barcelona. It’s difficult but I think it’s possible. It’s disappointing after a good weekend at Silverstone and was hoping to come here after a good test and be strong – maybe it won’t cause problems or maybe it will.”

Back to the home heroes, Andrea Iannone was another in attendance getting ready for the second round on Italian soil. Sitting out the race last season due to injury, the ‘Maniac’ is back this year and wants to get a solid result in a difficult season: “It’s a very difficult season for us. I hope in these last six races we improve the performance a bit. It’s very difficult for me to talk about the situation, we always try our best, in the garage and on track – and me at home, in the gym I try every day to improve. But it’s difficult at the moment, the feeling with the bike for me, and I struggle a lot. But I think the priority is to never give up and improve race by race and day by day. And continue to believe. Misano for me is a special weekend. A home weekend, we have two races in Italy and I hope this race this weekend for me is one of the best come the end of Sunday. But we’ll see. We start tomorrow and it’s important to start well, then we’ll see the potential during the weekend.”

Next up was Tito Rabat, who announced earlier the same day his plans for 2018 as he moves to Reale Avintia Racing, and extended his thanks to his current team ahead of the move: “This season we’re doing a good job and taking points in every race, except the last couple but in Silverstone we came back to doing that. First of all, I want to say thank you to EG 0,0 Marc VDS for these two years in MotoGP, and to Marc van der Straten for the years with his team and winning a title. I think it’s time for a change, and I’m very happy to go to Reale Avintia next season, and I think it’s a great opportunity to show I can be a strong rider in the MotoGP class.”

Finally, Franco Morbidelli took to the floor as he heads into the San Marino and Rimini Riviera event as title favourite for the first time ever – and says he’ll be pushing even more than usual, determined to take a podium on home turf: “It’s not over yet! We still have to push a lot and keep focused. Misano is a different GP for me, I will try to give everything – well, I always do that but I’ll try to give a little more because I’ve never been fast here or fast in home GPs and I’d love to take a podium in a home GP. It helps to know what your bike and your future will be, I think it’s always helpful and it keeps you calm.”