British GP Race: and 4 for Dovizioso! 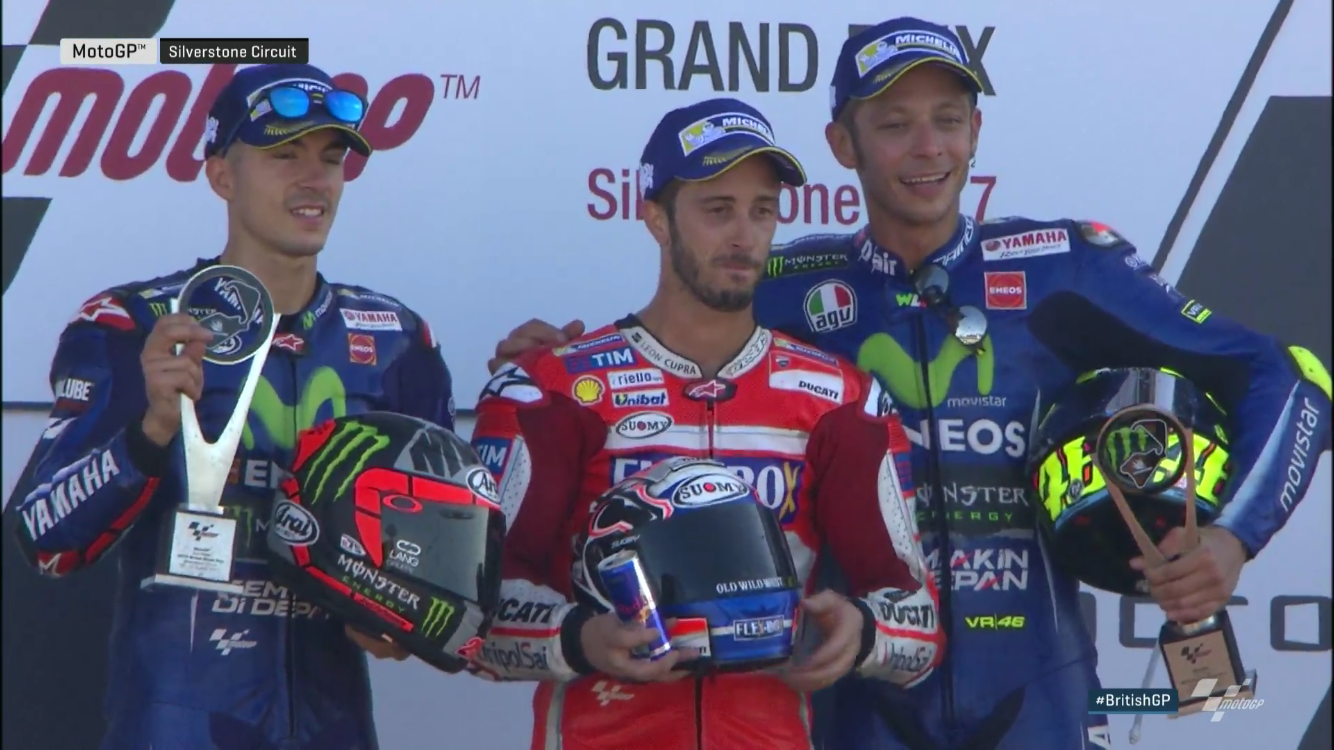 Andrea Dovizioso (Ducati Team) became the first man to win four races this season, as the Championship challenger put on a tactical masterclass once again. In a close second but unable to make a last lap lunge was Maverick Viñales (Movistar Yamaha MotoGP), with early leader Valentino Rossi (Movistar Yamaha MotoGP) completing the podium. As well as the podium finishers, the standings took a shake up as Marc Marquez (Repsol Honda Team) was forced to retire.

It was Rossi who bolted off the line; the nine-time World Champion getting a lightning start from the middle of the front row and disappearing into the distance in the initial stages. Behind the ‘Doctor’, Marquez led a close five rider train with Cal Crutchlow (LCR Honda), Viñales, Jorge Lorenzo (Ducati Team) and Dovizioso on the chase. Marquez suffered a huge moment early on, but the rider from Cervera remained in charge of the chasing pack.

Soon, the Dovizioso struck against Lorenzo and the group began to pull away from the ‘Spartan’, just as Rossi pulled away on his own at the front. The game of high-octane chess continued with the four in line and staying within touching distance of Rossi, until a sudden puff of smoke gave the Championship a serious shake up and Marquez was out of it.

That left four, with Rossi then reeled in and everything looking like it would go down to the wire. And that it did, with Dovizioso able to pounce with three to go and get past his compatriot, swiftly followed by Viñales. The ‘Doctor’ tried to fight back but found the duo able to just stay clear – and the final lap was approaching.

With the concertina effect seeing the Ducati able to pull a gap and then the Yamaha able to close, it was incredibly tight as the two headed around the final 5.9km lap of Silverstone. Having played his hand to perfection, Dovizioso was able to keep the advantage to the line – taking his fourth win of the year. Viñales took second, with Rossi completing the podium. Crutchlow, not quite able to get close enough to make his move, took fourth.

Lorenzo had a great race to cross the line in fifth - and only 3.5 seconds off the race winning time of his teammate. The ‘Spartan’ overcame Johann Zarco (Monster Yamaha Tech 3) in the latter stages to pull a sizeable gap on the Frenchman over the line as he continues to move forward. Zarco took P6, comfortably ahead of a more difficult day at the office for Dani Pedrosa (Repsol Honda Team).

Number 93 forced out of the British GP

Marc Marquez’s (Repsol Honda Team) hopes for victory at Silverstone went up in smoke with seven laps to go, as the number 93 was forced out of the fight at the front with a mechanical issue. The loss of prospective points blows the title fight wide open, with eventual winner Andrea Dovizioso (Ducati Team) able to move back into the Championship lead in the aftermath.

All is far from lost, however, as Marquez remains second in the standings and had good pace at yet another venue. Now nine off the lead and four in front of third-placed man in the standings Maverick Viñales (Movistar Yamaha MotoGP), it’s still very much game on.

Marc Marquez, DNF: “Today was really unlucky, as I was feeling very good on the bike and was there with the others, just trying to manage the race and tyres, especially the front as the temperature was higher than yesterday and I wanted to save it so to attack in the end. I had already seen that Dovi had something more than Viñales and Rossi, but I thought I could try and fight with him. So, everything was going well when I suddenly had a problem with the engine at the end of the straight. It’s a shame of course but that’s something that can happen in racing, and it was the first time for me with Honda. The positives are that we were fast here, as we have been at other tracks, and that we’re still there in the Championship. Zero points today, but I’m still feeling good with the bike and am looking forward to the next races."

Dovizioso: “I was in the right position at the right moment”

Andrea Dovizioso (Ducati Team) took win number four at the British GP, taking back the Championship lead from Marc Marquez (Repsol Honda Team) and now nine points clear at the top. Staying in contention throughout and then perfectly choosing his moment to strike, ‘DesmoDovi’ pushed to the maximum on the final lap, just able to stay out the clutches of Maverick Viñales (Movistar Yamaha MotoGP) – by a tenth.

Andrea Dovizioso, P1: “I’m a bit surprised because for the race I had a good feeling, but not to be able to win. I expected Honda to be very competitive but it didn’t happen. During the race we have to ride in a different way to practice and that changed it. I was able to save the tyre, with Maverick and Marc, and that helped me arrive at the end with better grip. I was also able to improve my speed in some corners because I was able to see how they did those corners. I wasn’t faster, but I was in the right position at the right moment and that was the key. What happened today is something special for us. We’re leading, but we’ve showed to everyone we have a chance to fight for the Championship. It’s long and the competitors are very strong – riders and bikes – so it’s open, but we’ve won four races in a different way and we work very well during the weekend. When we’re not fastest we’ve kept working, we go to a race and try to do the maximum. I was able to fight for a victory I didn’t expect. The bike has positives and negatives but I was able to play with it and make the most of the positives. "Every race can change everything – look at Marc. Six races is a lot of points and we have to think race by race. I wasn’t thinking about the Championship, I was comfortable in the race and when you’re comfortable you can play. When I saw Marquez on the pitboard it didn’t change my strategy, because I was comfortable. It was a fun race. For me it was difficult to understand what was happening through the race with the others, I saw Marc out on one lap but I didn’t know there were four riders. I saw Valentino drop a bit and thought I had to take the opportunity, and then pushed to the maximum on the last lap.”

Crutchlow: “I came here to win”

Cal Crutchlow (LCR Honda) converted a front row start into a top four finish at his home British GP, and the rider from Coventry was top Independent Team rider to boot. But after getting on the podium last season and feeling good throughout the 2017 weekend, the two-time GP winner is a little frustrated to not have been able to fight for the win.

That said, he says he did the best he could – and heads for Misano with his head held high.

Cal Crutchlow, P4: "It’s frustrating as I came here to win. You try to win every weekend, but this weekend was a special one, I felt good last year and I felt good again all weekend here, but I just didn’t have enough in the end. The other guys were quicker than me today, the front tyre was too soft for me as always and this was the reason I was struggling with the rear tyre in the end as I was having to spin a lot to turn the bike.

“But I did the best job I could and today that was fourth. A home podium would have been good so yes, I’m disappointed, but all credit to the three guys in front – Dovi (Andrea Dovizioso) rode fantastically. I didn’t think all weekend he was the guy to beat, I thought it would be Marc (Marquez). But we have to go to Misano with our head held high and try again there.”

Rossi: “You have to give your maximum”

The ‘Doctor’ takes P3 in his 300th premier class start

Valentino Rossi (Movistar Yamaha MotoGP) shot off the front row and into the lead of the British GP, holding the advantage for most of the race until Andrea Dovizioso (Ducati Team) and Maverick Viñales (Movistar Yamaha MotoGP) were able to reel him in and get past. The rider from Tavullia gave everything to hit back, just not quite able to do it – but he did fulfill his Saturday prediction by completing the podium in third. Happy enough with that, Rossi is even happier about the marked improvement made at a Misano test day and carried into the British GP weekend.

Valentino Rossi, P3: “I’m happy because for me it was a very good race after a good weekend, I made a good start and was able to ride well and give the maximum all race. This weekend we’ve improved and understood something important. In Misano in the test, we worked on the electronics on acceleration to try and save the tyre, nothing big but it worked here. I had good pace and could stay in front and ride the bike in a good way. We were worried because we suffer a bit in the last laps, but with five to go I thought I could do it. But I suffered a bit too much and Dovi and Maverick overtook me. It was a bit frustrating because I wasn’t strong enough to fight to re-overtake them. I tried everything and two or three times I went into corners and didn’t know if I could stop! But I’m happy because the podium was my target and we all arrived close together. To ride Silverstone on a MotoGP bike with this weather is really fun. It’s a great way to have my 300th race, in front a lot and fighting for the victory – that’s the goal, to continue as long as I can fight with the top guys.