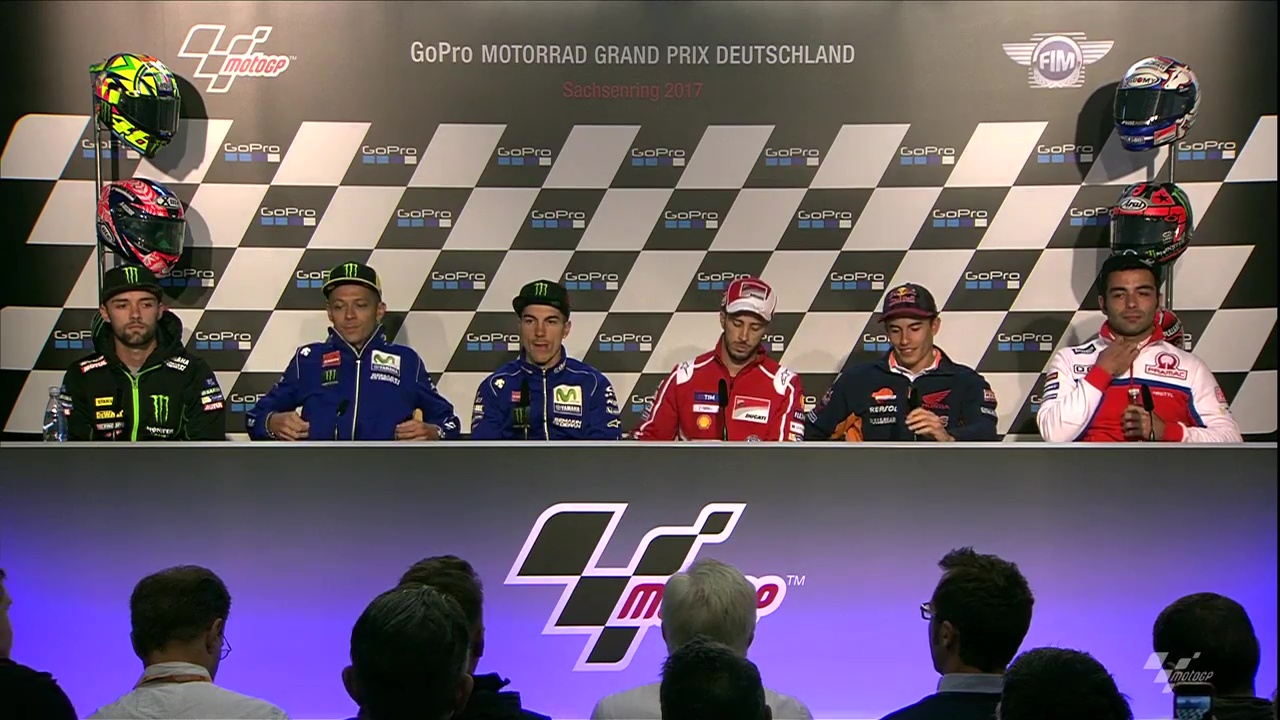 Riders talk rain, resurfacing and the Championship. Press Conference discuss weather, tyres and the newly-resurfaced Sachsenring – as well as one of the closest title battles in years

First to talk was Championship leader ‘DesmoDovi’, who says that still sounds like a strange description: “It sounds strange to me to be the Championship leader and I’m so happy with how we’ve worked in these eight races to be first – it’s a dream and I’m really happy. We’ve worked really hard in these five years. Especially in the last few races we’ve worked in the perfect way and even in Assen no one was able to work so much for the race, and we used a different setup in the race and it worked. I could make a good laptime, which for me is almost more important than the final result. Fifth wasn’t so great but conditions were very difficult and it was easy to make a mistake. My confidence is good, my feeling with the bike is good and I feel great with the team – that plays a big part in the final result. The weather here isn’t new and we’ve had it here before but the new asphalt will make a difference. We have to try it tomorrow, and no one could test here so we don’t have feedback to know about the tyres. Anything can happen and that’s positive – it means you don’t think too much about it!”

The man who now sits second after a DNF at the Dutch GP is Viñales, who now has tunnel vision on taking back the top: “I’m disappointed about the crash at Assen but in another way I was lucky. I’m happy and motivated, we were strong in Assen in the dry and that’s when I can relax. If I push myself to the limit we can be on top again. We’ve made many mistakes this season but we’ve learnt and we know what to do. We’ve improved in the rain too so it’s a good chance here to work hard. Last year I was quite strong here, I’m in good physical condition and here is quite demanding. Last time out we paid a lot for a bad qualifying and here we have to pay attention to the weather, when to put on the new tyres…it’s going to be a tricky weekend but we have to do our best."

One man who will certainly bring his best to the Sachsenring is the winner the last seven years he’s ridden it – Marc Marquez. From the 125 World Championship to MotoGP™, the Repsol Honda man has won every year from pole. Does that play a big role in his preparation? He says it helps, but that 2017 is still unpredictable: “Sachsenring has always been a good circuit for me and for Honda. That’s important, but this year is different. There’s a new surface so we need to see how the grip is, and the tyres. And the other thing here is the weather…last year was a flag-to-flag and then everything can change but arriving at a track where you’ve won in the past is good and you’re confident. Even in Assen we were able to recover some points so we’ll see what we can do here on Sunday. It’s so difficult to kind of plan the Championship – two races ago I was almost out the battle, and now I’m only some points behind. It’s really long, we need to work hard and push – I’ve made a few mistakes in the first part of the season but I’m there and I want to continue with the same mentality.”

It’s difficult to disagree as the races continue to deal different hands – and Valentino Rossi played the best the last time out, although the German GP promises to be different again: “First of all I’m very happy about the victory, it was after a great race and with great emotions. And it’s important for the Championship because it looks very interesting – a lot of riders and different bikes are very close. Never has the situation changed from one week to the next like it has this year. I’m there and not so far, and it will be important to be competitive here because it’s a different track compared to Assen. It looks like the forecast is quite bad but it will be important to be prepared for all conditions. Last year I wasn’t so bad in the dry or wet, but last year it was a crazy race with different conditions and flag-to-flag; we tried to stay out and it wasn’t the right strategy. So I hope for a full dry or full wet race, but we’ll try to be ready and cleverer in case of a flag-to-flag race.”

The possibility of a flag-to-flag seems like a threat on Sunday – and Petrucci has at least one target as his run of incredible form continues: “I didn’t expect to be so fast in the dry in Assen, but I managed the race and the light rain at the end maybe helped me a little bit. It’s a good moment for sure and the bike is going well. Here I feel positive and last year I did well in the dry, then in the wet I tried to push and crashed. The weather will be important I think, and also the new asphalt. We’ll see, but these things are the same for everyone. It’s a great emotion to be here with these riders, they’re all fighting for the title and it’s great to fight with them even if I’m quite far off in the Championship. But I’m in a good position and I have nothing to lose. But my main target is to not do what I did last year and crash.”

Finishing the race was the speciality of Jonas Folger (Monster Yamaha Tech 3) after the German was the only rider to have scored points every weekend until Assen – so that’s the first target as he prepares to line up in the premier class for the first time at home. After an impressive start to the season, Folger says the goalposts have now changed as expectations have been excelled – and is happy to race on home turf: “I’m very pleased to be here, the German crowd is amazing. I was signing things earlier and it’s great to feel the support. The season so far is going well. The winter started well, we had some expectations at the beginning that we could be in the top ten but then suddenly we did better than we expected. Now we know we can get in the top six if we have a good day. We have good speed and just need to show it every weekend. It’s not always easy for me with the weather and track conditions, every track is different to ride on a MotoGP bike. I need some experience, but if we have a good day we can do a good job. I wondered if MotoGP was the right choice and in the end it was – in the winter test I was relieved, and I think we’ve done everything right.”