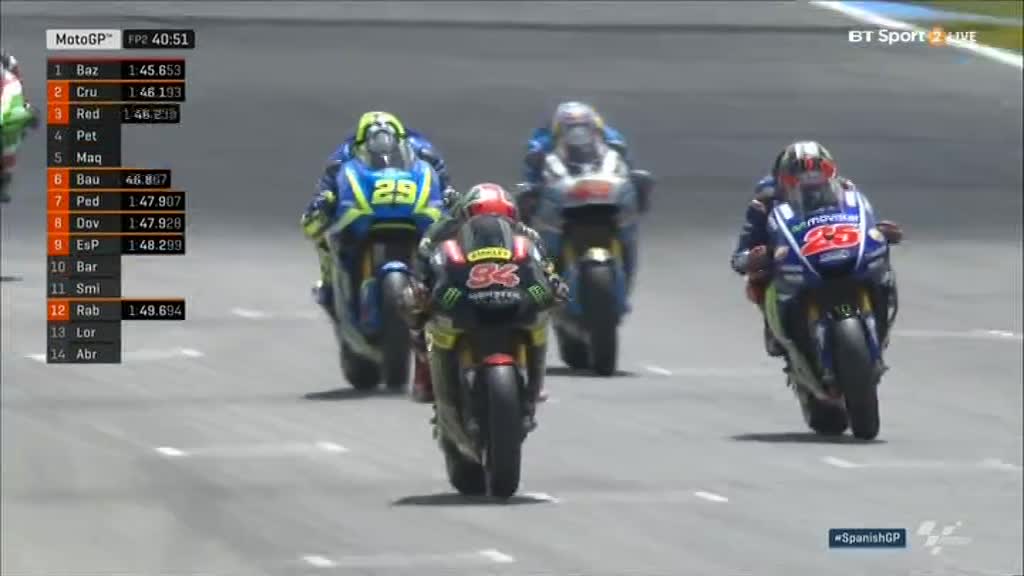 The Samurai strikes back: Pedrosa unstoppable on Day 1

Dani Pedrosa (Repsol Honda Team) topped a wet FP1 in the Red Bull Gran Premio de España, before conditions improved dramatically for a dry FP2 with the same name at the top. The three-time World Champion did a 1:39.420 to go quickest by over half a second, with a stunning laptime from Jack Miller (Estrella Galicia 0,0 Marc VDS) putting him into second as the only other rider in the 1:39s.

Cal Crutchlow (LCR Honda) was P2 in the wet and moved back one place in the dry later in the day to end Friday in third, just ahead of what looked to be an incredible headline as the last few minutes of FP2 approached: Jorge Lorenzo (Ducati Team).

Fastest out the blocks in the wet in FP1 for the early stages of that session, the ‘Spartan’ topped the timesheets in the afternoon with a few minutes left on the clock before ending Day 1 of his first home race of the year in fourth and top Ducati. Danilo Petrucci (Octo Pramac Racing) also impressed on the GP17, locking out the top five.

Maverick Viñales (Movistar Yamaha MotoGP) was sixth and suffered a fast lowside crash at Turn 9 – only his third during a GP weekend session since 2017 began – and teammate Valentino Rossi also had a more difficult first day in P12.

Completing the top ten was another stunner, as Pol Espargaro (Red Bull KTM Factory Racing) took KTM into tenth for the first time, only + 1.153 in arrears in an awesome performance on Day 1 at one of his home Grands Prix.

Scott Redding (Octo Pramac Racing) was in P11 ahead of Rossi, with Jonas Folger (Monster Yamaha Tech 3) slotting in behind the ‘Doctor’ and teammate Johann Zarco in fifteenth.

Reigning Champion Marc Marquez (Repsol Honda Team) was fourteenth on Friday, but didn’t use the softer option rubber from Michelin to set a time attack.