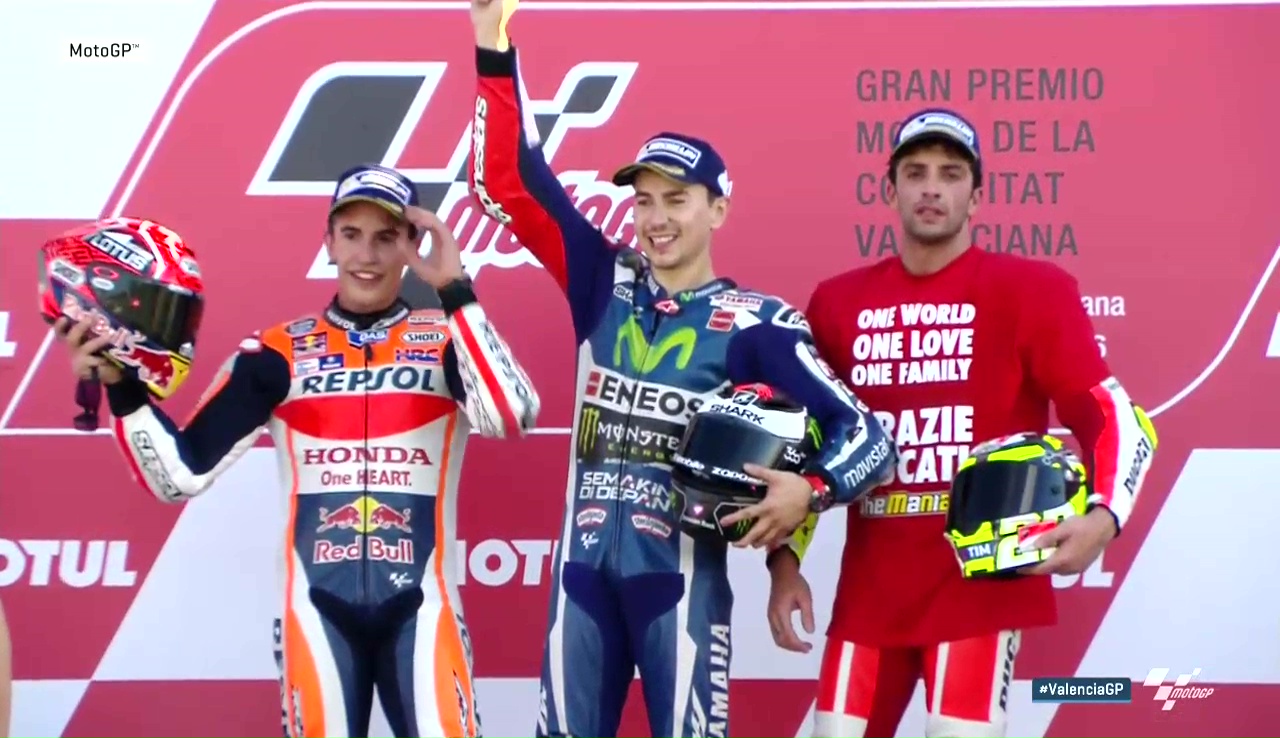 Jorge Lorenzo "Por Fuera" made a Flag-to-Flag race in pole; with a brilliant menacing Marquezz coming back as a rocket in the ast laps. Speaking of... Rockets; the power of the Ducati had the better over Valentino Rossi with Andrea Iannone P3.

In his 250th Grand Prix start, Movistar Yamaha MotoGP rider Jorge Lorenzo said goodbye to that title in stunning style, as the ‘Spartan’ took a lights-to-flag signature victory in his final appearance in blue. A record-breaking pole saw the Spaniard then escape at the front, holding off a late charge from reigning World Champion Marc Marquez (Repsol Honda Team). An Italian battle royale decided the final podium place, with Andrea Iannone (Ducati Team) taking P3 on the penultimate lap.

Under the blue skies of a long-awaited dry race day, Lorenzo got the holeshot from pole, but it was Iannone who was the big winner into Turn 1 as the Italian blasted through on the inside to take second. With the ‘Spartan’ imperious at the front, Iannone led the chase as Maverick Viñales (Team Suzuki Ecstar), Valentino Rossi (Movistar Yamaha MotoGP), Marquez and Andrea Dovizioso (Ducati Team) joined him in the battle behind the lead, after the number 93 suffered a bad start off the line.

After getting past Viñales, Rossi and Iannone fought it out at the head of the second group as the number 99 began to disappear into the distance, with Marquez and the number 25 in close company. As Rossi got to the head of the chasers, Iannone hit back again – and so began Round 2. It was the ‘Maniac’ who initially came out on top, before Marquez saw his shot and got through – gapping the fight to start a charge after Lorenzo at the front, eventually cutting more than three seconds off the number 99's lead.

The podium decider was left to a brutal, classic battle between Iannone and Rossi - with the rider from Tavullia seeming to have got the better of his younger compatriot, until Iannone hit back with an aggressive move that also gave him a gap he was able to hold onto over the line. Viñales completed his final weekend with Suzuki in P5.

Dovizioso eventually dropped slightly back from the front group into the clutches of Aleix Espargaro (Team Suzuki Ecstar) and brother Pol (Monster Yamaha Tech 3) to fight for P6 after grip issues - with the younger brother Pol finally taking the honours over the line in a photo-finish against Dovizioso, and Aleix seeing the flag in eighth.

Cal Crutchlow (LCR Honda) unfortunately suffered a crash to bid adieu to his fantastic latter half of 2016 – but he takes the title of Top Independent rider although bettered by Pol Espargaro on the day. Crutchlow’s compatriot Bradley Smith (Monster Yamaha Tech 3) had another impressive ride as he gets back to fitness following a crash ahead of the British GP and two knee surgeries, taking P9 in his final race with Tech 3 before he moves to Red Bull KTM Factory Racing.

Alvaro Bautista had a stunning ride in his final race with Aprilia Racing Team Gresini in their special “Red” livery, completing the top ten to round out a year of impressive progress.

Returning Repsol Honda Team rider Dani Pedrosa crashed out after an impressive weekend despite a recent collarbone break, and wildcard Mika Kallio, debuting the new KTM RC16, was sadly unable to see the flag after technical trouble - but the Austrian factory now head into the 2017 pre-season with vital information after lining up for the first time.

After a history-making 2016, MotoGP will return in pre-season testing on Tuesday - with Lorenzo in red at Ducati as the pack shuffles and prepares its hand for another incredible season of motorcycle racing. 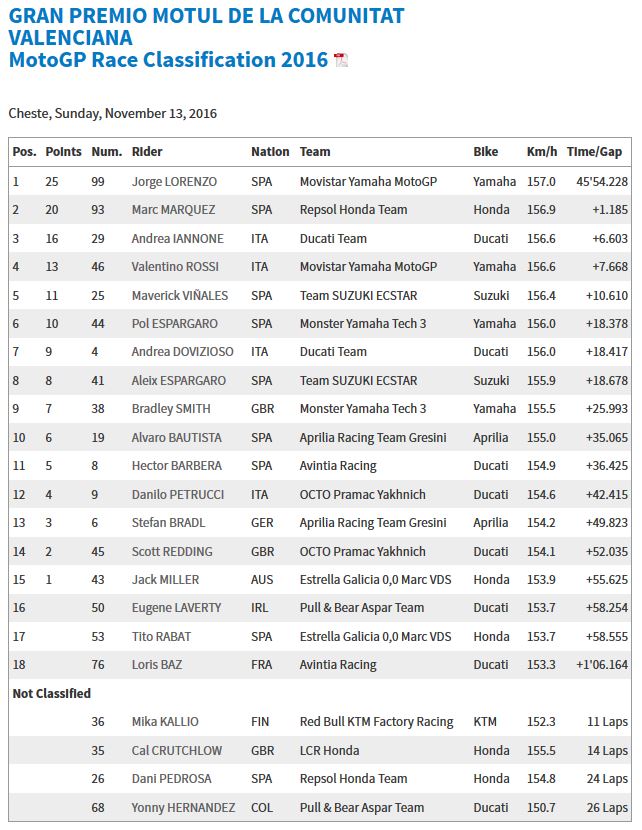