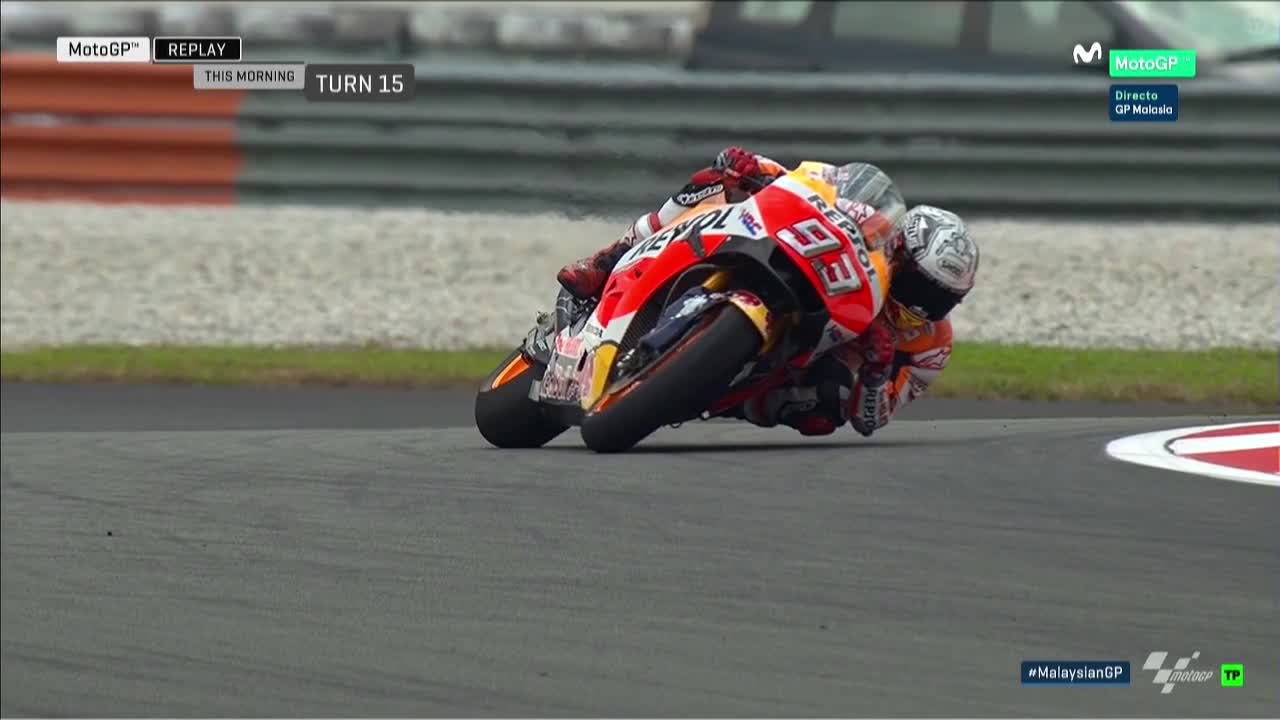 In contradiction with most of the main medias that only claim the feast of Marquez making the Friday fast time; I think it is unfair to jack Miller; who; whatever the situation was; nevertheless claim the pole of FP2. Therefore; even if I'm the only one I say "Congrats Jack!".

The first practice session of the day for Moto3™ saw damp patches of the newly-resurfaced Sepang International Circuit hamper early laptimes, before the moisture dried off and times began to fall. MotoGP™ had a dry FP1 – topped by Marc Marquez (Repsol Honda Team) – before a downpour during Moto2™ saw track conditions worsen dramatically. With track changes and the new surface designed to deal with the inclement South East Asian weather, and Turn 15 especially changed and now off-camber, the grid could get a full taste of the new asphalt in wet and dry conditions on day 1.

With FP1 times out of reach after the rain, the times from the first session remained the combined timesheets for Friday, with Marquez heading the tables – despite missing FP2. As mentioned in the pre-event Press Conference by the new reigning Champion, Marquez has been suffering with illness ahead of the event and sat out FP2 with his place on the combined timesheets not under threat; focusing instead on recovering more fully for Saturday and qualifying. The 3-time MotoGP™ World Champion was over two tenths clear at the top.

Maverick Viñales (Team Suzuki Ecstar) was second fastest in FP1 and retains the place on combined times, with Scott Redding (Octo Pramac Yakhnich) impressing in P3 with a late leap up the tables in FP1.

Aleix Espargaro (Team Suzuki Ecstar) was P7, just behind compatriot Hector Barbera (Avintia Racing), who returns to Avintia this weekend following his substitutions for Iannone at the factory Ducati Team. Yonny Hernandez (Pull&Bear Aspar) had a stunning session to spend some time in the top three, before ending Friday in P8 overall.

Alvaro Bautista (Aprilia Racing Team Gresini) was ninth fastest as the Spaniard again impressed for the Noale factory, with 2010, 2012 and 2015 MotoGP™ World Champion Jorge Lorenzo (Movistar Yamaha MotoGP) completing the top ten after losing his final hot lap to a problem in sector two in FP1.

In the wet afternoon session, some riders got in some wet weather time as well as trying the Michelin intermediates, but it was Jack Miller (Estrella Galicia 0,0 Marc VDS) who finally topped FP2 from Crutchlow when conditions were just able to take slicks – with Hector Barbera, Bradley Smith (Monster Yamaha Tech 3) and Loris Baz (Avintia Racing) completing the top five.

With weather for FP3 not a certainty in the unsure climate of Sepang, the biggest names who could find themselves out of Q2 if laptimes don’t improve on Saturday morning are Australian GP winner Cal Crutchlow (LCR Honda) and Motegi podium sitter Andrea Dovizioso (Ducati Team). The third practice session will be the final decider for direct entry to Q2, with Marquez leading the way and hoping to be back to full power for qualifying day. 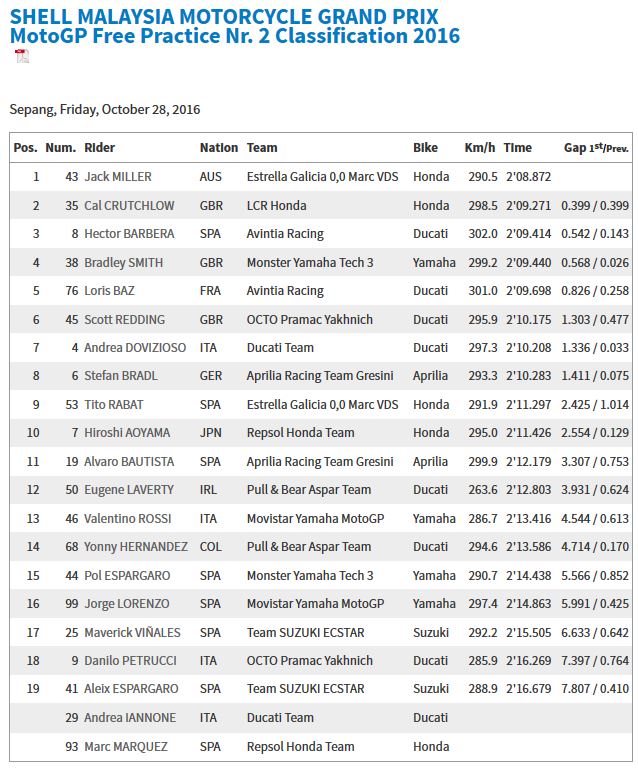