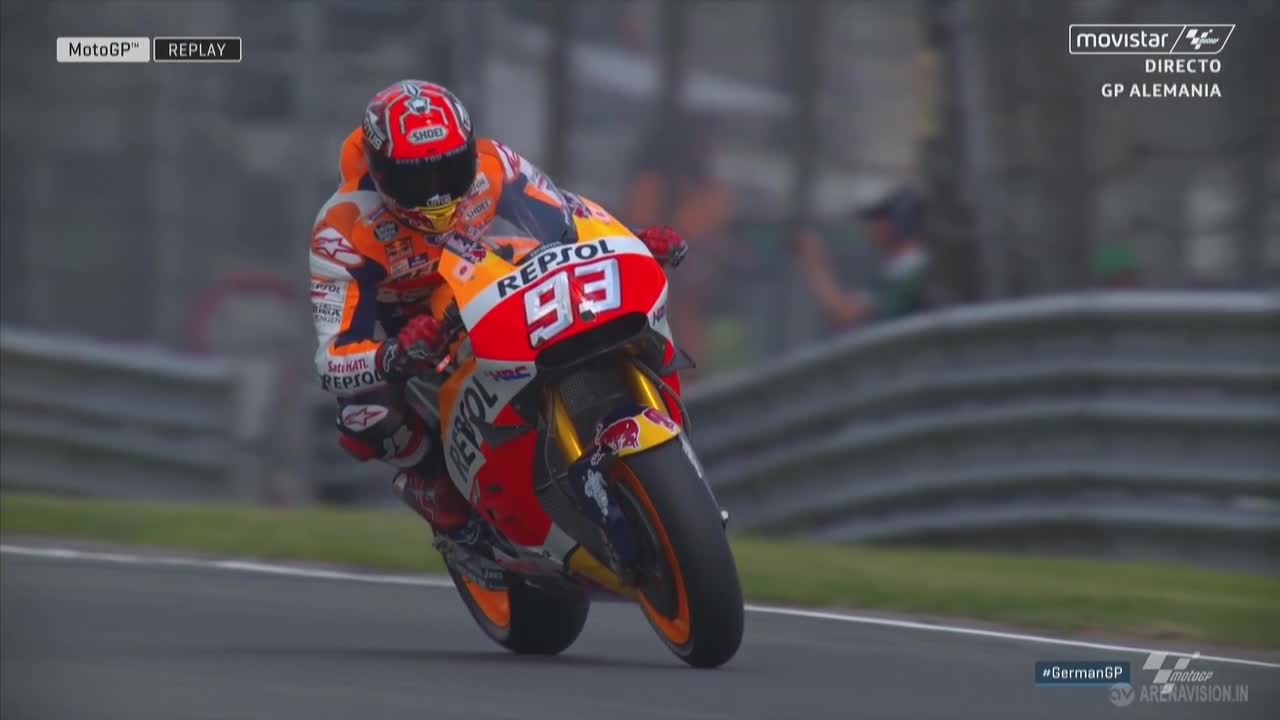 Marc Marquez takes pole position for the German MotoGP at Sachsenring ahead of a shock second for Avintia Ducati's Hector Barbera (who made the best of a tow form Marquez and later Andrea Iannone), with Valentino Rossi completing the front row in third.

Jorge Lorenzo - who fell at the end of Qualifying 1 - then suffered his third accident of the weekend in the closing minutes of Qualifying 2. Unable to return, the world champion was pushed down to 11th by the chequered flag.

The surprises had hardly stopped as the MotoGP™ World Championship headed out for Q2 to decide the grid for the GoPro Motorrad Grand Prix Deutschland. Jorge Lorenzo (Movistar Yamaha MotoGP) had made it into the session by the skin of his teeth, crashing while on a flying lap in Q1.

Most riders elected to do two runs, the field roaring out of the pits with under five minutes remaining. It was with this that the king of Sachsenring made himself known, Marc Marquez (Repsol Honda Team) setting a 1’21.160 to take his fourth straight pole position in the premier class. The Spaniard is looking to continue his perfect record in Sachsenring, having won from pole for the last three years in the premier class and setting the fastest lap along the way. His incredible record extends even beyond that, having not stepped off the top step in Germany since his first win there in 2010.

Behind him was a marvellous Hector Barbera (Avintia Racing), the Spaniard taking his second ever front row start in the premier class. His first came back in 2012 at the Italian GP, on a Ducati for that race as well. Not only was he the leading Independent Team rider, but also the leading Ducati and the only Ducati man on the front row. Second place is Barbera’s best grid position in the premier class and his best Qualifying result since his last race in the 250cc class at Valencia in 2009.

Valentino Rossi (Movistar Yamaha MotoGP) will complete the front row for the German GP, half a second off pole position. ‘The Doctor’ was pleased to stay on the front row after traffic got in the way during his second run on track with new tyres. Rossi’s race pace looks strong enough to challenge Marquez and he’ll be hoping to end Honda’s domination of the German circuit.

Having set an identical time to Rossi, Danilo Petrucci (Octo Pramac Yakhnich) will lead the second row of the grid ahead of Pol Espargaro (Monster Yamaha Tech 3). Marquez may have had a distinct advantage with his pole time, but both Espargaro and Petrucci were within a tenth of second place.

Just as sectors started to flash red Jorge Lorenzo suffered his second crash within 30 minutes, coming off at Turn 1. His day could hardly get any worse, the factory Yamaha man set to line up in 11th. This is his worst grid position since he was 12th at the Dutch GP in 2013 after breaking his collarbone.

Andrea Iannone (Ducati Team) fell just five minutes into the session at Turn 1 as he began his second flying lap. It was a small crash but took valuable time away from the session and forced him to use his second bike. 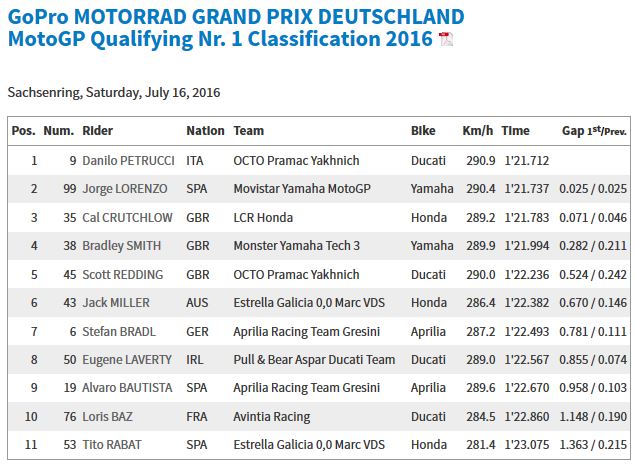 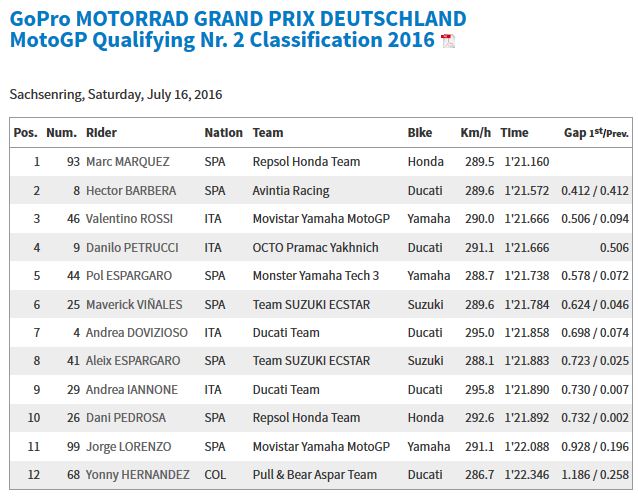