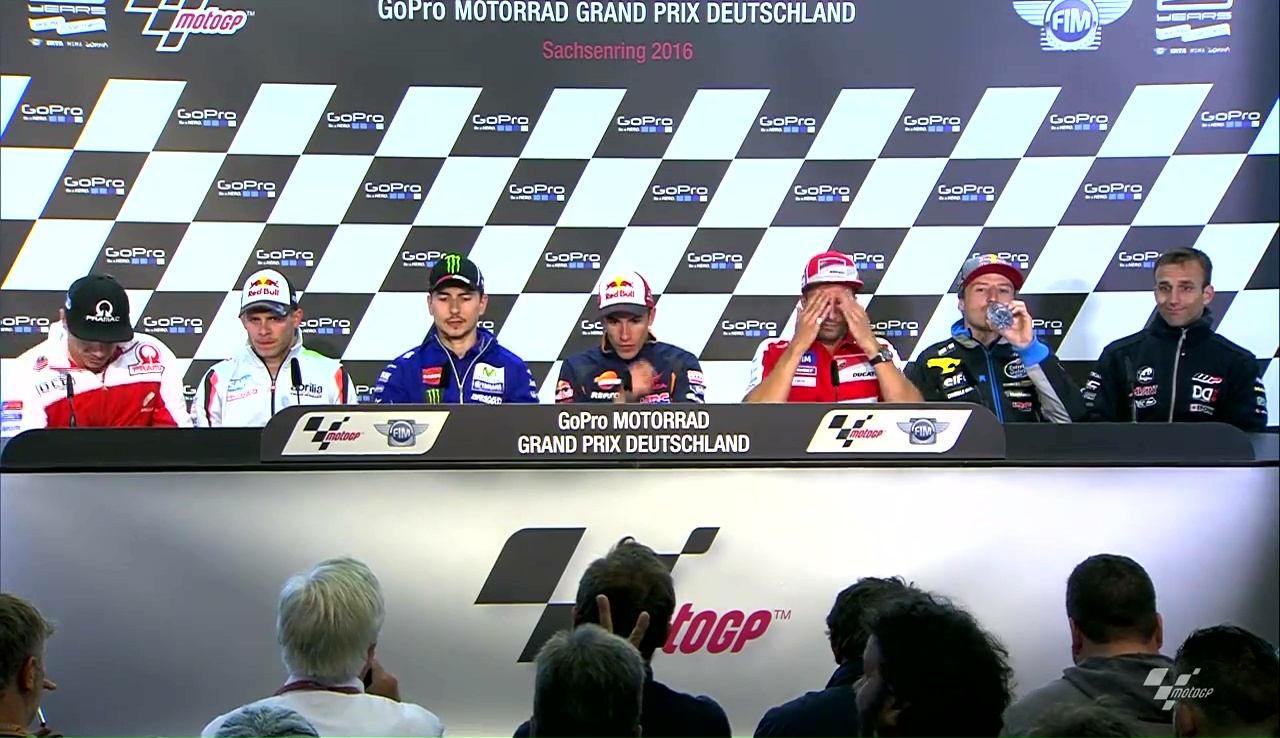 It was once again a full house for the pre-race press conference, seven riders squeezing in to answer the press’ questions. The skies and weather were dark and gloomy but there were smiles all around as Marc Marquez, Jorge Lorenzo, Andrea Iannone, Jack Miller, Scott Redding, Stefan Bradl and Johann Zarco sat down. The GoPro Motorrad Grand Prix Deutschland marks the halfway point of the 2016 season, the summer break commencing after Sunday.

Championship leader Marc Marquez (Repsol Honda Team) got the conference underway. The Spaniard is looking for his seventh straight win at the Sachsenring, but the weather could change it all: “Like we’ve seen today it’s very cold and Sunday also looks unstable.” With ten left hand corners, the German track plays to Marquez’s strengths: “Usually with left corners I feel better maybe from Dirt Track but we’ll see this weekend if we can keep the level.”

He’s never won at the 3.7km long Sachsenring, but Jorge Lorenzo (Movistar Yamaha MotoGP) needs a good result at the German GP. In Assen he struggled home to tenth and is keen to leave the past in the past: “Important weekend because in the last two races we’ve lost a lot of points. We come here looking to finish on the podium but we’ll see how the weather is.” The factory Yamaha man is no stranger to comebacks: “Last year on three occasions I’ve been further back than 18 points and I recovered three times the same points.”

You can never rule Andrea Iannone (Ducati Team) out of a weekend, the Sachsenring might be one of Ducati’s weakest tracks historically, but ‘The Maniac’ loves a fight. “Sachsenring in the past is difficult for us because it’s a narrow track and for my bike it’s a problem. For sure we try the best we can this weekend,” he commented on his prospects for the GP.

As the winner of the Dutch GP, Jack Miller (Estrella Galicia 0,0 Marc VDS) was back answering questions again, he’s one who’ll be hoping for rain: “The smile hasn’t left my face since last week. It feels stupid saying it but a top ten is what we’re looking for unless the weather keeps up like this, then who knows! We’ll give it a go.” Like Marquez, Miller is looking forward to the mainly left corners of Sachsenring: “Left hand corners which will help me out because we’re still not perfect on the right hand corners with my leg.”

Miller was joined on the podium by Scott Redding (Octo Pramac Yakhnich) in the Netherlands, like the Australia he knows a podium in the dry will be tough: “I always say I’m happy for top ten, top eight, top six I’m over the moon. We have to see with track conditions too. When it’s completely dry against the factory guys it’s tough but in the mixed conditions you have more of a chance.”

Stefan Bradl (Aprilia Racing Team Gresini) was the only local rider in the press conference as he is the only German rider in the premier class. Aprilia continue to get stronger and he has taken some of their best results, but his future is not with the Italian brand: “It's not clear yet, there are a few talks around but I have nothing concrete. We’ll see what the next few days bring but I’m concentrating on my home GP and it’s a bad time to have other things on your mind.”

Yet another piece of the 2017 puzzle fell into place before the GoPro Motorrad Grand Prix Deutschland as Johann Zarco was announced as Monster Yamaha Tech 3’s second rider for 2017. His contract includes an option for a second year and the French rider was obviously overjoyed at the chance to move to the premier class: “I’m just so happy and I really hope I can do the best job I can and be ready to do the best I can. I think even though it’s the first year if you prepare well you can get good results.” 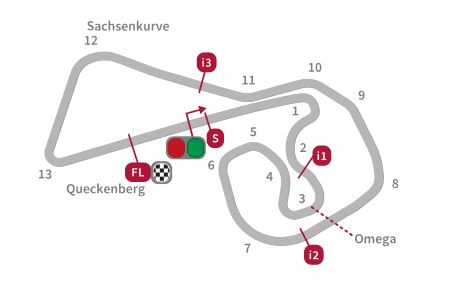