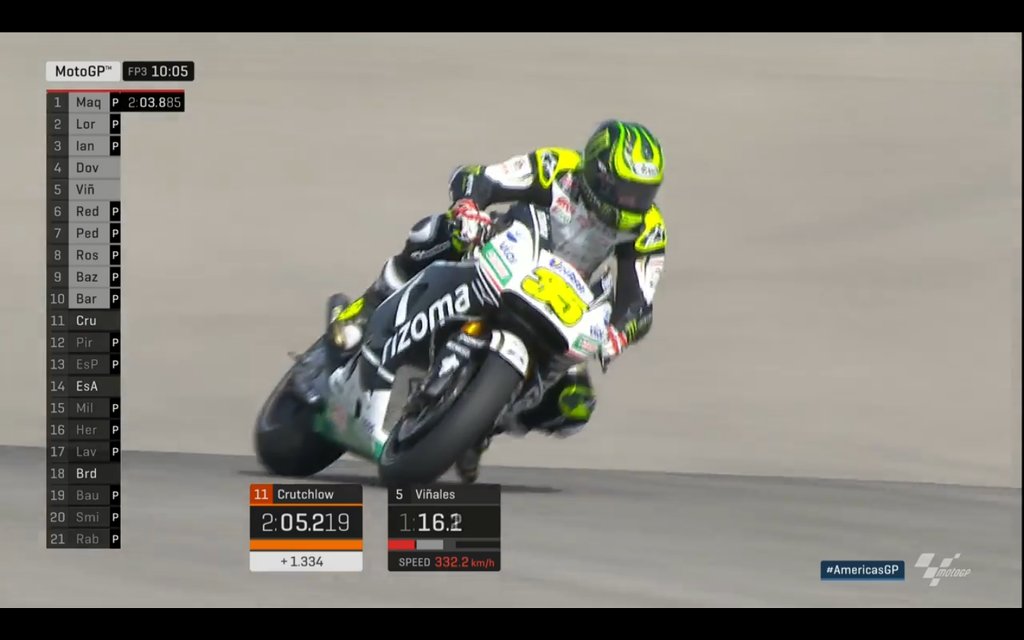 Untouchable once more, Marc Marquez improved his best time as Andrea Iannone and Jorge Lorenzo close in on the Honda rider.

Free Practice 3 saw Michelin debut their new medium rear tyre, flown in directly from France. The new tyre boasts a harder carcass, created in the wake of the issues experienced in Argentina. Jorge Lorenzo (Movistar Yamaha MotoGP) and Marc Marquez (Repsol Honda Team) immediately put in the new rear while the likes of Valentino Rossi (Movistar Yamaha MotoGP) opted for what was familiar with the soft rear.

Times quickly fell as riders looked to ensure their place in Q2, Lorenzo jumping to second with a mid 2’04 on his fourth lap. He would not be alone as Marquez continued his jaw-dropping speed to improve his fastest time of the weekend yet again. Both the Ducati Team riders, Andrea Iannone and Andrea Dovizioso, were also able to move inside the top five within the first 15 minutes of the session.

The 45-minute session would see Marquez drop into the 2’03s for the first time of the weekend and top the session with a 2’03.741, the fastest lap of the weekend. Perhaps the most worrying aspect of Marquez’s speed for his rivals is that this time came while he was using a partially worn medium rear tyre.

While Marquez never came under any real pressure, the now customary shootout for the top ten began slightly earlier than usual with 13 minutes remaining. Riders slowly built towards faster times for an explosive final five minutes.

Once again it was Andrea Iannone (Ducati Team) who ended in second, the factory Ducati rider having not yet finished outside the top three in practice at Austin in 2016. He was the only rider aside from Marquez to drop into the 2’03s with a 2’03.937, ending 0.196s back on Marquez. This is the closest a rider has been to the Spaniard all weekend.

Third was Jorge Lorenzo who made up for a difficult Friday to immediately move inside the top five in the session. A 2’04.331 saw him 0.560s back on Marquez and 0.394s behind Iannone’s time. The gaps between the top three may be quite large, but behind them things are incredibly close with no more than 0.2s splitting two riders between third and tenth.

Only 0.005s behind Lorenzo was Maverick Viñales (Team Suzuki Ecstar), his GSX-RR continuing to work well around the 5.513 meters of COTA. Viñales’ 2’04.336 was half a second faster then his time on Friday. Four different manufacturers filled the top four positions in Free Practice 3.

Cal Crutchlow (LCR Honda) completed the top five thanks to a 2’04.408 which came on his penultimate lap of the session. The Brit has so far failed to score points in 2016, despite showing the pace to challenge for podium finishes.

Pol Espargaro, Aleix Espargaro (Team Suzuki Ecstar), Hector Barbera (Avintia Racing) and Bradley Smith will all be forced to go through the Q1 session and battle for the top two spots.

Jack Miller’s (Estrella Galicia 0,0 Marc VDS) participation had been called into question due to suffering a broken bone in his right foot on Friday, but the Australian pushed through the pain barrier to compete in FP3. Even a broken foot couldn’t halt his charge as he improved his Friday pace by over a second, ending 17th.

Andrea Dovizioso suffered a small fall at Turn 11, quickly up and able to return to the pits. 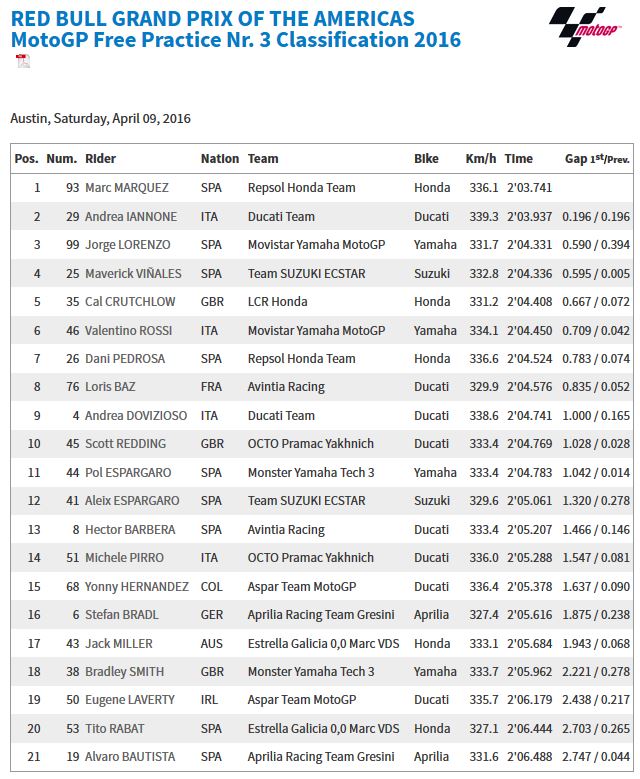