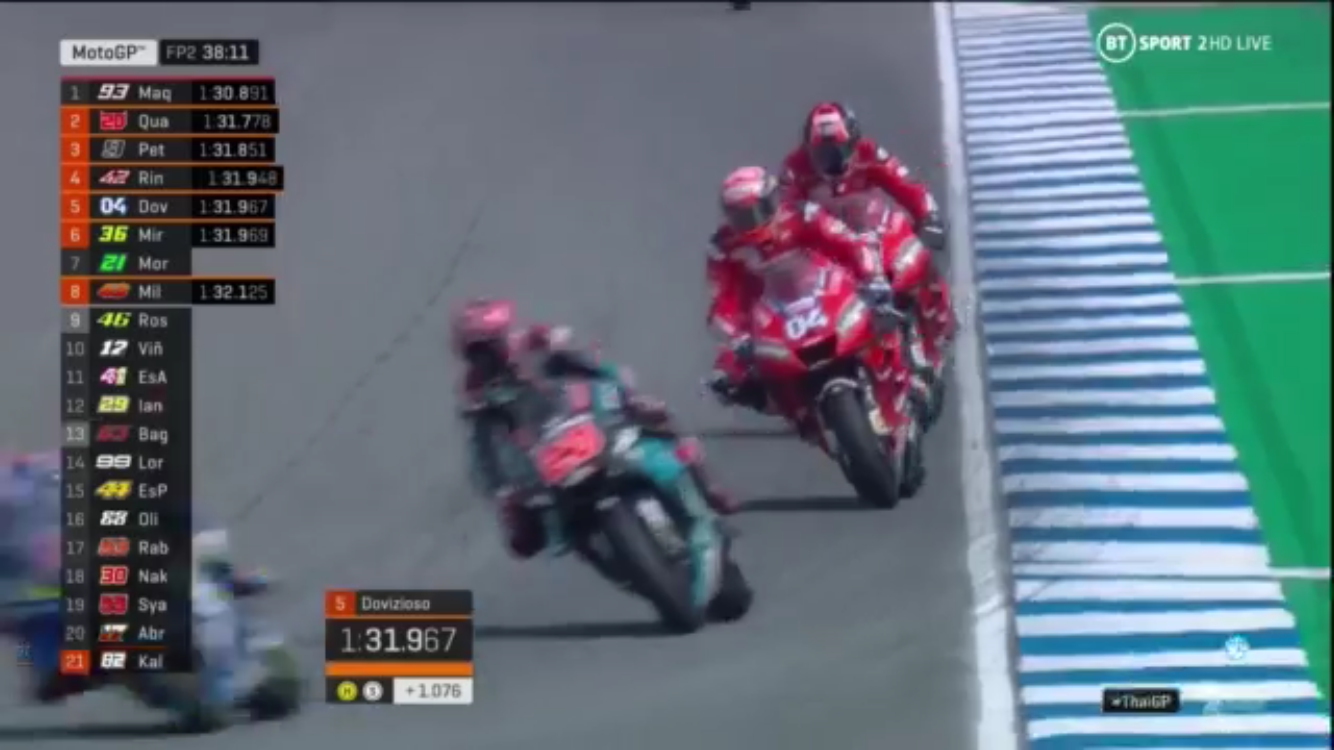 The Iwata manufacturer made sensational gains by setting a stunning Friday pace, whilst Marquez returned from hospital after an FP1 crash

After the intensity of FP1, the MotoGP™ class took to the Chang International Circuit for the second session of their PTT Thailand Grand Prix. Fighting ‘fit’ and eager to send a warning to his rivals after a massive FP1 crash, Marc Marquez (Repsol Honda Team) wasted no time at all in getting back down to business. But soon enough, the Yamaha onslaught came and it would be Fabio Quartararo (Petronas Yamaha SRT) who led Maverick Viñales (Monster Energy Yamaha MotoGP) and Franco Morbidelli (Petronas Yamaha SRT), making it a Yamaha 1-2-3.

Continuing their success from FP1, the Yamahas of Valentino Rossi (Monster Energy Yamaha MotoGP) and teammate Maverick Viñales confirmed their pace in the final part of the day. With less than four minutes on the clock, Viñales stormed to the top of the combined times. Franco Morbidelli (Petronas Yamaha SRT) followed his fellow Yamaha rider to second place. But pipping the pair of them, 20-year-old Fabio Quartararo set a 1’30.404 to go top and end day one as the man to beat. The fourth Yamaha of Valentino Rossi was fifth in the end and well in the hunt.

Australian Jack Miller (Pramac Racing) led the Ducati charge from fourth place, just under three tenths off the pace at the front set by Quartararo. His teammate, Francesco Bagnaia, was 12th on combined times, one place below Danilo Petrucci (Ducati Team). Petrucci had been inside the top ten after FP1 but slipped to eleventh due to the flurry of improvements at the close of the session. Second in the championship and race win challenger from 2018 in Buriram, Andrea Dovizioso (Ducati Team) was eighth overall but gives himself work to do for the rest of the weekend.

Marquez hit the track and on just his third lap of the session, fired in the best time of the weekend. Injured yet determined, the opening laps from the Champion-elect showcased his outstanding ability to put any misdemeanours behind him almost seamlessly. However, he would not be able to go any quicker in the session and in the end, would end up in sixth on the combined timesheets, the only Honda inside the top ten.

Strong form from MotorLand Aragon looks to be no fluke for Aprilia, as Aleix Espargaro (Aprilia Racing Team Gresini) finished the session with fast times and was just over a tenth from Marc Marquez. Espargaro was briefly joined in the top ten by teammate Andrea Iannone but the Italian slipped to 16th, just 1.108 from Quartararo’s top time. Aprilia are in the fight again.

After technical problems in FP1, Alex Rins and his Team Suzuki Ecstar squad were back in the top ten come the conclusion of the opening day at the Chang International Circuit. However, his rookie teammate held top Suzuki honours. Joan Mir set consistent times right through the session and would end up in ninth, with a place secured inside the top ten should rain close in. Rins was tenth and importantly inside the top ten in case of a wet FP3 tomorrow morning.

Looking to break into the top ten for qualifying tomorrow afternoon will be the likes of Danilo Petrucci, Francesco Bagnaia and Britain’s Cal Crutchlow (LCR Honda Castrol), who has had a rather quiet and uneventful first day in Thailand and was 13th, 0.940s off Quartararo. Pol Espargaro (Red Bull KTM Factory Racing) was 15th on his return to action following a broken wrist sustained at Aragon and was top KTM in Thailand. Fellow KTM rider Miguel Oliveira (Red Bull KTM Tech 3) suffered a second crash of the weekend early on.