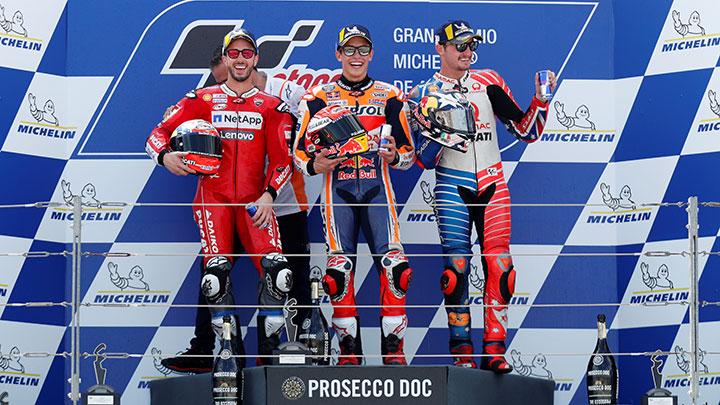 A very dark sky predicted a flag to flag race that could have turned differently. But the whole Race stayed straight dry. Marc Marquez started first, go first, makes all the laps first and finishes with 5 seconds in front of the rejuvenated Ducatis of Andrea Dovizioso and Jack Miller. Despite a great effort from Maverick Viñales; Yamaha leaves with a very pale result Today...

On his 200th GP start, Marc Marquez (Repsol Honda Team) decimated his competitors to claim victory at the Gran Premio Michelin® de Aragon. The Spaniard led from start to finish as a fierce podium battle raged behind, with Andrea Dovizioso (Ducati Team) and Jack Miller (Pramac Racing) completing the rostrum.

Plan A was executed to perfection for Marquez from pole position. A lightning start saw the number 93 beat Fabio Quartararo (Petronas Yamaha SRT) and Maverick Viñales (Monster Energy Yamaha MotoGP) into Turn 1, with Miller getting a good launch from P4 on the grid to take P3. Viñales slipped to P4 with Quartararo giving chase to Marquez on the opening lap but by the end of the lap, Marquez was a second down the road.

There was drama on the opening lap for the fast-starting Alex Rins (Team Suzuki Ecstar), the Spaniard got a bit too excited at Turn 12 as he collided with Franco Morbidelli (Petronas Yamaha SRT). The latter crashed out with Rins dropping to P17. Up the road, Marquez was powering clear. Miller was now the man leading the chase but the gap was quickly up to 1.8 seconds by Lap 4, with the race rapidly becoming a battle for the remaining podium places. 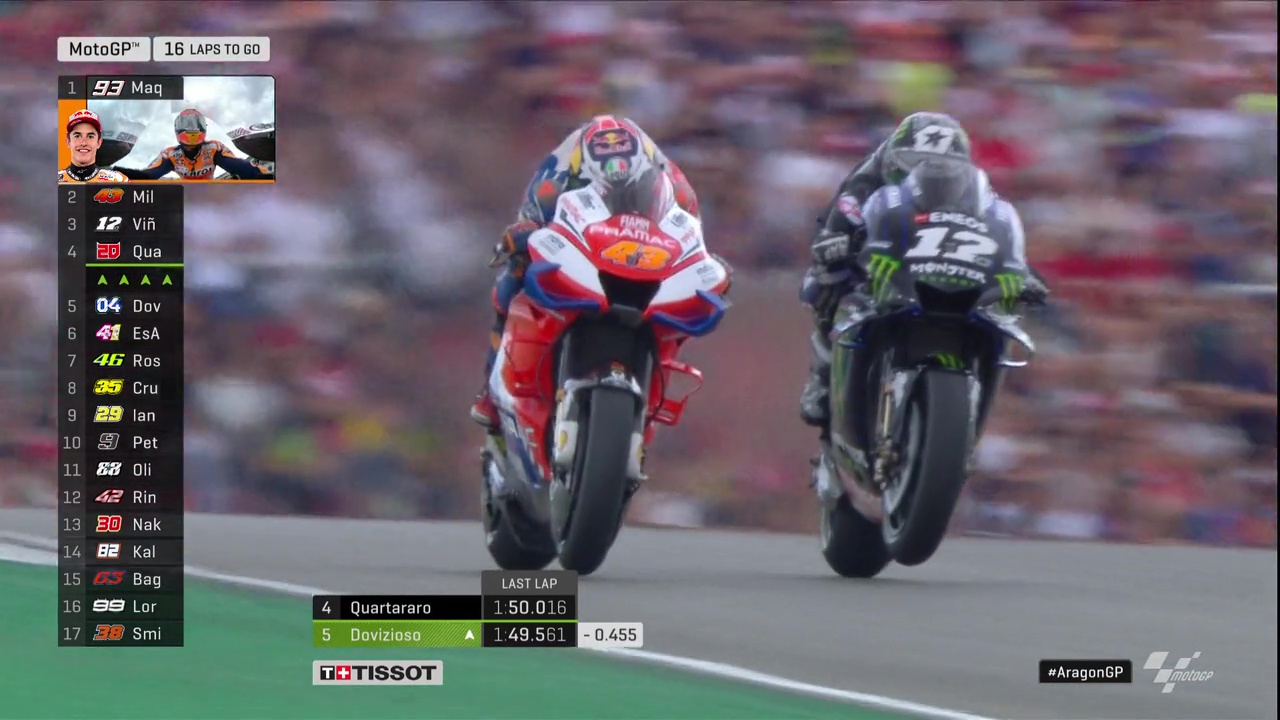 In that fight, Miller was holding off the Yamahas of Viñales and Quartararo. Viñales got the better of the Frenchman and immediately reeled in Miller’s half-second advantage, before passing the Australian on Lap 8 as the riders inside the top seven bunched up. Dovizioso was up behind Quartararo, with Aleix Espargaro (Aprilia Racing Team Gresini) holding off Cal Crutchlow (LCR Honda Castrol) in sixth and seventh.

Lap 9 saw Dovi power past Quartararo’s Yamaha as the Italian now locked his radar onto the back of fellow GP19 rider Miller, with Viñales holding the gap to Miller at just below a second. Marquez was over four seconds clear and with nine to go, Dovi made his move on Miller at Turn 1. The Pramac rider wasn’t going to cave in easy though, Miller hooked himself onto the back of Dovi as the duo then started to haul in Viñales ever so slightly. The trio was split by just a second heading into the last handful of laps and with Viñales’ hard-rear tyre starting to fade – and with the Yamaha’s top speed disadvantage down the straight – the Spaniard was under pressure.

Three to go: Viñales was still holding onto P2. However, with just three laps remaining, the red Desmosedici was all over Viñales like a rash. Heading onto the back straight, the story was written – Dovi used the Ducati grunt to make Viñales look like he was standing still as 04 grabbed P2. Now, Miller smelt a podium. Into Turn 1 on the last lap, Miller went for it. Up the inside of Viñales, the Ducati man just about got it stopped and P3 was his. But could he hold onto it around Yamahas favoured first and second sectors? He could. Dovi had second wrapped up and coming onto the back straight for the final time, there was nothing more Viñales could do.

Marquez rolled over the line, catching the 25 points he was after as the number 93 now takes a 98 point lead to Thailand – the Championship will be his if we wins there at the beginning of October. Dovi crossed the line to take a brilliant P2 having starting from 10th, with Miller earning his third podium of the season. Viñales was left disappointed with fourth but it was a valiant effort nonetheless as the number 12 again had a strong showing throughout the weekend.

Quartararo had a quiet race to finish just over three seconds off Viñales in fifth. That was the rookie’s aim pre-race though and another top five is certainly nothing to be upset by. Crutchlow produced a good ride to finish P6 for the third time in four races, the British rider just edging out Espargaro – a sterling effort from the Aprilia man to secure his best result of the season.

Valentino Rossi (Monster Energy Yamaha MotoGP) was in the battle for the top five in the early stages, but the nine-time World Champion dropped back soon after to have a lonely race in Aragon. P8 went the way of ‘The Doctor’, with Rins fighting back to P9 after his opening lap incident, with then handed him a long lap penalty. LCR Honda Idemitsu’s Takaaki Nakagami won an intense battle for the top 10 which saw himself, Andrea Iannone (Aprilia Racing Team Gresini), Ducati Team’s Danilo Petrucci, Miguel Oliveira (Red Bull KTM Tech 3) and Joan Mir (Team Suzuki Ecstar) finish within two seconds of each other – the latter experiencing problems in the opening exchanges. Tito Rabat (Reale Avinita Racing) took the final point in P15.

So, it’s match point to Marquez. Win in Buriram and the seven-time Champion becomes an eight-time Champion, or simply out-scoring Dovi by two points will see him take the crown. Dovi isn’t going down without a fight though and, if we harp our minds back to last year, the duo went head-to-head for Thai GP glory. 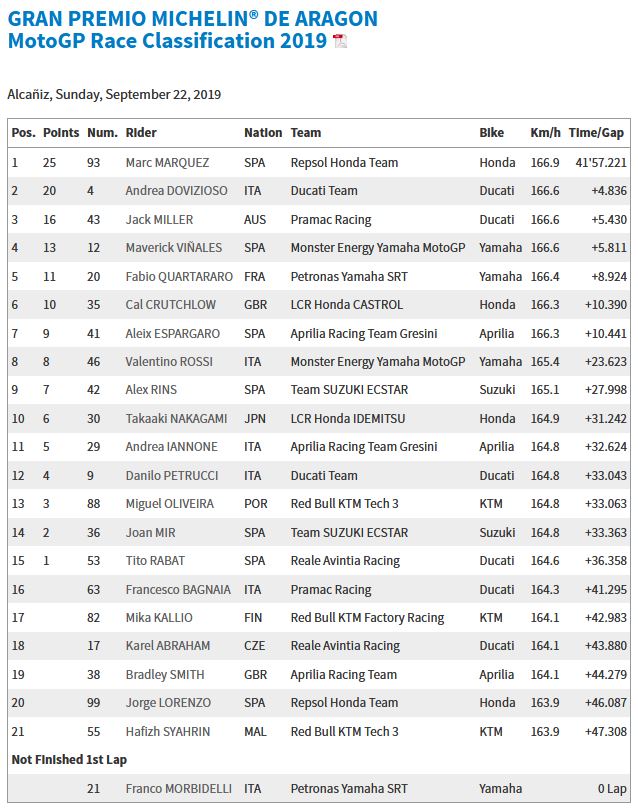