British GP Qualifying: Within a Tenth… 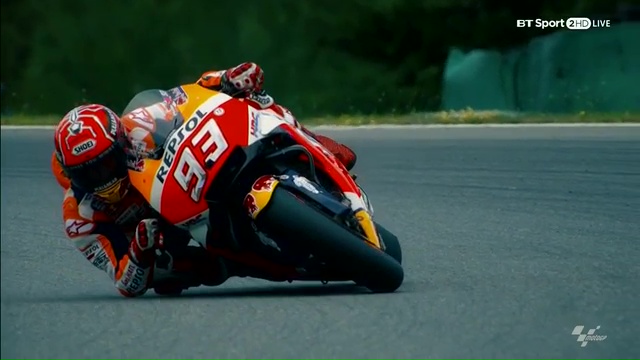 Marc Marquez (Repsol Honda Team) took a record-breaking pole and got down into the 1:59s for the first ever lap of SIlverstone under the two minute marker in qualifying for the British GP, but it was far from easy as the reigning Champion just beat Valentino Rossi (Movistar Yamaha MotoGP) to the top by less than a tenth and the two key rivals painted the timesheets red in the final minutes of the session. For incredibly close company in third there’s home hero Cal Crutchlow (LCR Honda) – fastest on Friday and on pole last year – with the whole front row covered by a tenth and a half.

Maverick Viñales (Movistar Yamaha MotoGP) heads up the second row a further two tenths back on Crutchlow, just ahead of the fastest man in FP4, Jorge Lorenzo (Ducati Team). As on Friday, the number 99 was top Ducati at Silverstone in qualifying – just ahead of teammate Andrea Dovizioso in P6, 0.173 back.

Dani Pedrosa (Repsol Honda Team) made the biggest leap forward on Saturday afternoon after a tough Friday and FP3, coming through Q1 to move up into seventh – and by only 0.006. Just behind Pedrosa in the middle of the third row is Johann Zarco (Monster Yamaha Tech 3), with Aleix Espargaro (Aprilia Racing Team Gresini) completing Row 3 as he rides through the pain barrier.

Jonas Folger (Monster Yamaha Tech 3), the second graduate from Q1, also managed to make some progress on Saturday afternoon and will start from tenth – just ahead of Red Bull KTM Factory Racing rider Pol Espargaro. Through directly to Q2 after a stunning Friday, Espargaro suffered a crash in qualifying but nevertheless took eleventh for the British GP as KTM continue to impress. Scott Redding (Octo Pramac Racing) took P12 at a venue that has been a happy hunting ground for the Brit.

Thirteenth on the grid belongs to Alex Rins (Team Suzuki Ecstar) as the rookie shows some good pace at Silverstone, just ahead of Pull&Bear Aspar Team’s Alvaro Bautista, who begins his 250th race from P14. Andrea Iannone (Team Suzuki Ecstar) locked out the fastest fifteen.

Rossi: “We can fight for the podium”

Valentino Rossi (Movistar Yamaha MotoGP) makes another bit of history on Sunday at Silverstone as he lines up to begin his 300th premier class race – becoming the first rider in history to hit that number. And he’s set up well for the occasion, just missing pole by less than a tenth and improving his best lap around the British track by some margin.

There are some things to improve for tomorrow, however, with the rider from Tavullia hoping to fight for the podium – but tyre life the key thing to work on before the lights go out.

Valentino Rossi, P2: “We always suffer in Sector 4 because it’s a place where our problem is big and we spin a lot. But starting yesterday from a good level, today we tried to improve but unfortunately we weren’t able to make it better. The feeling with the bike and track is a bit worse today than yesterday, but we hope from today to tomorrow it remains dry. But it was a good lap and I enjoyed it, I improved my best lap at Silverstone by 0.8. Now we have to try and understand if we can improve, especially the tyre life, because as had happened a lot this year, at the beginning we’re not bad but we suffer with degradation. I think the second half of the race will be difficult but I hope to make a small step to be there. 300 is a great number and it’s important to try and get on the podium tomorrow in this race! If everything goes well I think we can fight for the podium – maybe the last spot?”

Marc Marquez (Repsol Honda Team) had two crashes on Friday – rider ok – but bounced back on Saturday to make history in signature style. Putting in the first 1:59 lap of Silverstone, the reigning Champion was the only man to break that two minute barrier – but was less than a tenth clear of Valentino Rossi (Movistar Yamaha MotoGP).

Feeling some ill affects from Friday’s misadventures and with some bad weather early on, Marquez didn’t expect the laptime to be possible, but did have a better feeling on the bike than on Friday – a good omen for the rider from Cervera to get in the fight for the win on Sunday.

Marc Marquez, P1: “First of all, when I woke up this morning my body was a bit lazy after the crashes yesterday. Yesterday I was able to be fast but was struggling with feeling, which was much better today. I didn’t expect to do a 59 but when I put in the soft rear I felt more grip and I was pushing to the maximum. For tomorrow the rhythm isn’t so bad and we’ll try to use Warm Up to make another step – but it will be difficult with a lot of riders with good pace! But the important thing is that we’re there. I think it will be a close race because the top four riders in the Championship have a good rhythm, plus Cal who is really fast, and it will be a good race. It will be important to check the temperature and choose the right rear tyre.”

Lorenzo: “I was very satisfied with my second laptime”

Satisfied with his laptime after proving the fastest Borgo Panigale machine all weekend, Jorge Lorenzo (Ducati Team) was nevertheless a little disappointed to be off the front row at Silverstone; riding with more confidence and getting closer and closer. Fastest in FP4 on his second bike on a new tyre after a quick dash back to the pits, Lorenzo recovered momentum quickly after his first bike broke down – and carried that into Q2.

The most successful man in the premier class at Silverstone, the Spaniard says they’re getting towards being able to fight for something ‘important’ – and is riding with much more confidence.

Jorge Lorenzo, P5: “We had some problems with the electronics in FP4 and I had to go back on the scooter and take the other bike for the last few minutes, and we used a new tyre so that’s why we were so fast. Then in qualifying I was very satisfied with my second laptime, it was very fast, but the problem was the other riders were so fast! Not only Marc, but also Rossi…impressive laptimes. I expected the front row so when I saw I was fifth I was a bit disappointed because I was very proud of my lap. Yesterday we had some problems – vibration over the bumps and consistency on used tyres. We’ve solved the first one but the second one we still need to solve. But it has been a good day, knowing this track isn’t the best for our bike. I feel that we are closer, I’m riding with more confidence and we’re much closer than the beginning of the season. We’ll try here to make a good race but if it’s not possible, I’m sure we’re on the way to fighting for something important.”

Q1:
Pedrosa and Folger move through to Q2

After FP3 saw little chance of improvement following early morning rain, Dani Pedrosa (Repsol Honda Team) and Jonas Folger (Monster Yamaha Tech 3) found themselves heading through to Q1 after a difficult Friday - and both moved through in the afternoon sun, with the Spaniard leading the German by a comfortable three tenth margin.