Assen GP Qualifying: The “Other” Yamaha… 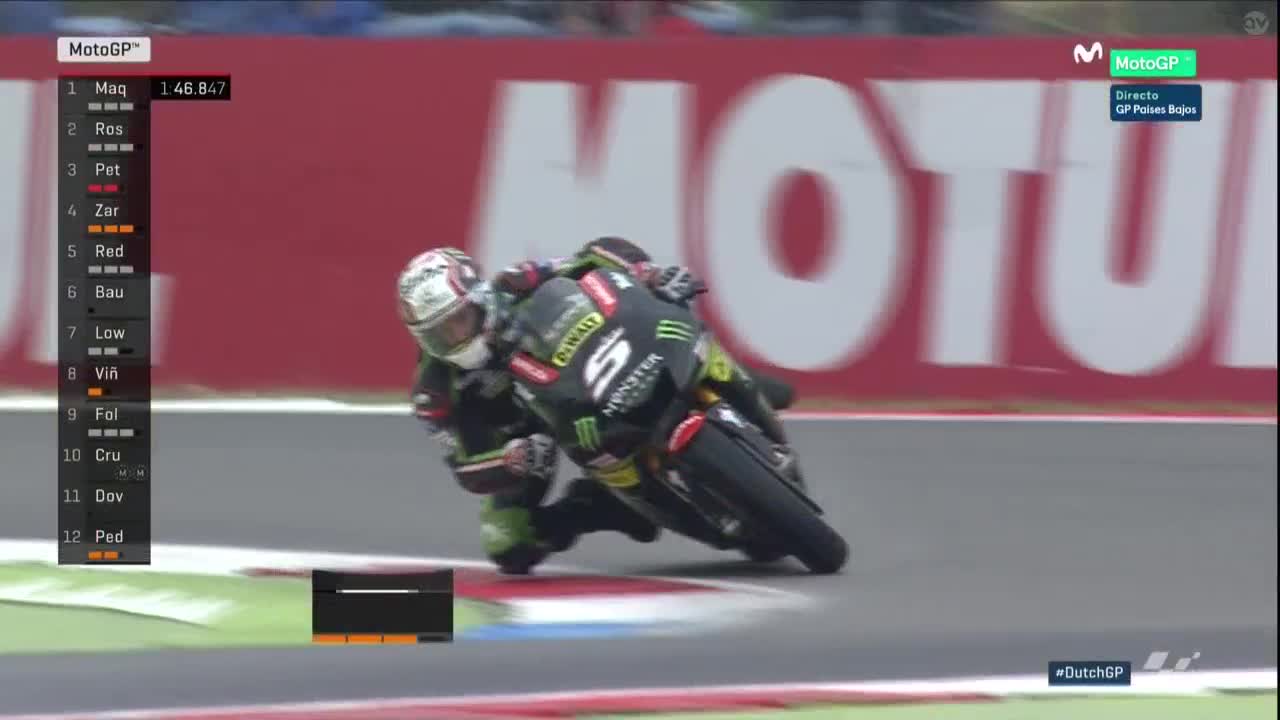 Johann Zarco (Monster Yamaha Tech 3) took his first ever premier class pole position at the Dutch GP, dueling it out with reigning Champion Marc Marquez (Repsol Honda Team) as the final few seconds ticked down. Marquez crossed the line first and first – but the Frenchman almost immediately hit back to take his first MotoGP™ pole on his final lap. Zarco's Assen heroics also make it the first French pole since Olivier Jacque in 2002. Another superstar in the battle was Danilo Petrucci (Octo Pramac Racing), who followed up his first ever front row in the Catalan GP by repeating the feat in the Netherlands in very different conditions.

Valentino Rossi (Movistar Yamaha MotoGP) looked a contender for the top spot until his final sector, and although missing out the ‘Doctor’ will head the second row and has good scope to attack. Scott Redding (Octo Pramac Racing) starts a season-best fifth after graduating from Q1 and topping FP3 despite a low drama crash, and Jonas Folger (Monster Yamaha Tech 3) completes Row 2 in another impressive session from another rider with a reputation for excellence in the rain.

Sam Lowes (Aprilia Racing Team Gresini) made the most of his first ever Q2 appearance, taking a top ten start to head up Row 4 – and ahead of Championship leader Maverick Viñales (Movistar Yamaha MotoGP). Dani Pedrosa (Repsol Honda Team) was P12.

Q1: Battle of the Brits: Redding and Lowes head for Q2
Wet conditions in Q1 stage a battle for supremacy – and graduation to Q2

Rossi: “It’s very important to start in the top five”
The ‘Doctor’ just misses the front row but starts P4 at Assen

Valentino Rossi (Movistar Yamaha MotoGP) just missed a front row start at the Dutch GP, but the number 46 says the most important thing is starting in the top five and near the front – something he more than achieved to head up Row 2 in fourth.

In fact it was a positive day overall with good pace and a good feeling, as well as some good information gained – now all that remains to be seen is the weather for race day.

Valentino Rossi, P4: “It’s a shame to not be on the front row but it’s very important to start in the top five for the race. I am in fourth position, it’s is a good place, and it was always a positive day because I was competitive this morning, I felt good with the bike, we had two more-or-less full wet sessions and we can work on the new chassis to understand where it can be competitive. The feeling was quite positive. Now, we have to wait for the weather because the conditions here in Assen are always a big surprise; we are hoping for dry, fully dry or fully wet, and we will see.”

Petrucci: “I was on top until the moment that counts…”
So close to pole for the Italian but it’s a second consecutive front row start

Danilo Petrucci (Octo Pramac Racing) got his career first front row in Barcelona and he almost followed it up with a first ever pole in the Dutch GP, on top for much of qualifying until the final efforts of Johann Zarco (Monster Yamaha Tech 3) and Marc Marquez (Repsol Honda Team) pushed him down to P3. Disappointed to have missed out, ‘Petrux’ also recognises that being frustrated about “only” being on the front row would previously have seemed unimaginable – and is optimistic that he’ll have the pace for the top five to pair with a happier ending than that of the Catalan GP.

Danilo Petrucci, P3: “I’m very happy. Just a few months ago I couldn’t imagine I could be angry about a front row! But I was on top all the session until the moment that counts most at the chequered flag...and I was quite surprised. I checked the classification before the last lap but then I made a mistake because I was pushing too hard. I crossed the line and saw I was third I thought ‘no…it must be a mistake!’ But this is my second front row, almost third because I had a second fastest lap cancelled at Mugello…I just hope the race doesn’t finish like Barcelona. I need to stay calm. I don’t know what weather would be better tomorrow but I think I hope dry – maybe I don’t have podium pace but I could fight for the top five.”

Johann Zarco (Monster Yamaha Tech 3) took a stunning rookie pole position on Saturday at Assen, besting the difficult wet but improving conditions to steal it last minute from reigning Champion Marc Marquez (Repsol Honda Team). It’s the first pole for a French rider since 2002, when Olivier Jacque started from the front in Germany. Now targeting the podium after a positive finish in Barcelona, the Frenchman is ready for a podium fight.

Johann Zarco, P1: “I’m so happy to be on pole because Saturday is a rainy day but I was feeling good, getting references and confidence on the bike. I still needed to understand the track. I was quite ok then in FP4 it was dry but using wet tyres, and we almost thought we could put on slicks, but then it rained again. I think this extra information helped me to manage qualifying well. In only 15 minutes the idea was to stay on track because as we saw in Q1 that staying out meant people were improving lap by lap. Then I was thinking it was a shame because we could have changed tyres but didn’t have time…but it was conditions I like, dry conditions and wet tyres. I think the others were using too much tyre but I was ok and it was the time to do it. I think I’ll try for another podium. I learned a lot from Barcelona and I said that starting from the first two rows gives us chance to fight for the podium, so from pole is even better! I’m enjoying it and it’s just fantastic…I struggled in Barcelona in practice when I crashed and I was more like a rookie but then in the race I could do a good job. Our target is to be on the podium and one day fight for victories, so starting my rookie season like this it’s just fantastic to be able to fix targets for next season.”

Marquez: “In both conditions I feel ready”
Rain or shine, the reigning Champion is optimistic after qualifying P2

It looked like it was enough to take pole, but Repsol Honda Team’s Marc Marquez was just pipped to the post in qualifying at the TT Circuit Assen as Johann Zarco (Monster Yamaha Tech 3) crossed the line to take his first pole position. Marquez remains positive despite losing out on that, however, saying the goal was never pole specifically - it was more to start at the front and ‘be there’. And he certainly feels he is, come rain or shine.

Marc Marquez, P2: “Today was one of those days you have to be smart and be there. I mean you need to be on the front row or second row, not lose too many positions in qualifying and start well tomorrow. We didn’t do anything special but we’re there and that’s important. It was important for us to start in front, as a minimum because it looks like the Yamahas have good pace. I don’t feel so bad in the dry either, so in both conditions I feel ready. Zarco is a surprise but not a big surprise, he’s a very good rider and was close to the front in Le Mans. So I look forward to following him tomorrow and trying to keep up…”