Catalunya GP FP3: The Chicane and The Yamahas 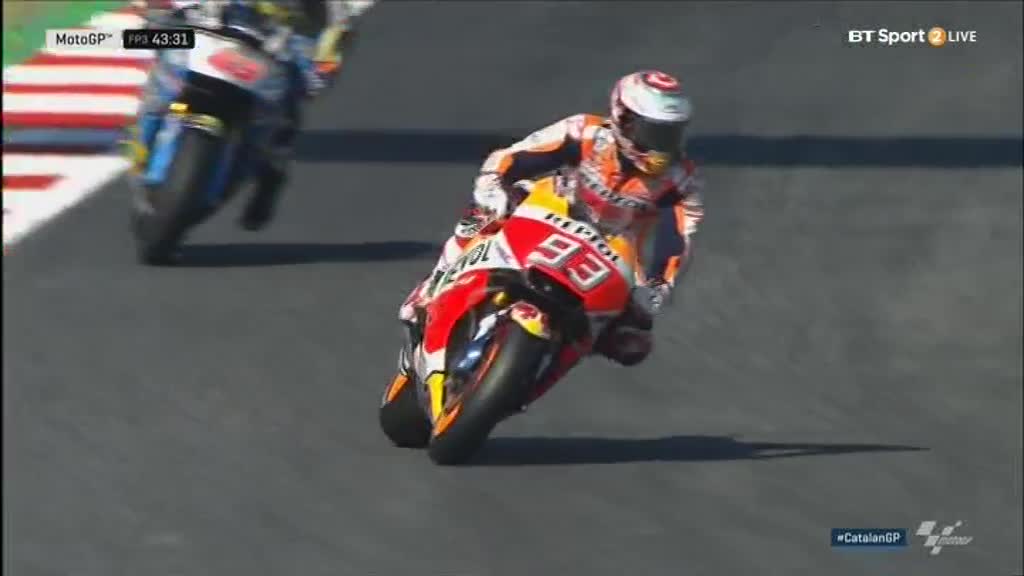 Marquez leads the way to Q2, Rossi and Viñales miss the cut

Reigning Champion Marc Marquez (Repsol Honda Team) kept his stranglehold on the timesheets at the Catalan GP in FP3, as the track layout reverted to the chicane used in 2016 and the third practice session solely dictated entry to Q2. Just a tenth behind the number 93 was his teammate Dani Pedrosa, with Alvaro Bautista (Pull&Bear Aspar Team) completing the top three.

Both Marquez and Bautista were crashers in the session, sliding out at Turn 10 in high synchronicity but low drama for both. Johann Zarco (Monster Yamaha Tech 3) was another who fell, taking a dusty sprint back to the pits.

Aleix Espargaro (Aprilia Racing Team Gresini) put in a stunner to go through to Q2 in P4 at his home race after some recent struggles, ahead of Mugello winner Andrea Dovizioso (Ducati Team). Jorge Lorenzo - second fastest on Friday - put in another impressive turn of speed in P6 - and only 0.008 behind teammate 'DesmoDovi'.

Andrea Iannone (Team Suzuki Ecstar) took seventh to move through to Q2 and is back to full strength after suffering with illness at his home race last time out, ahead of a solid double top ten for Octo Pramac Racing as Scott Redding pipped teammate Danilo Petrucci to P8. Hector Barbera (Reale Avintia Racing) was the final rider automatically going through to Q2.