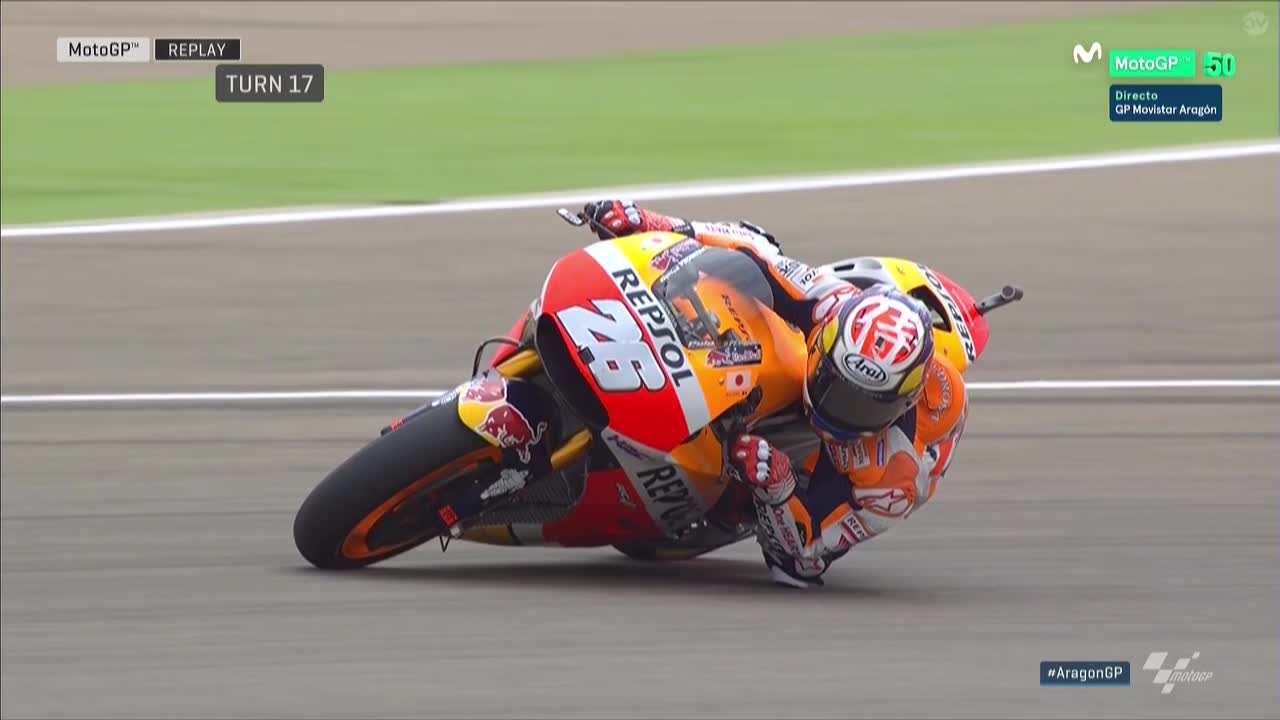 Pedrosa on top as Repsol Honda plant their flag at MotorLand. Misano winner stakes his claim on home turf to top Friday's timesheets from teammate Marquez

Repsol Honda rider Dani Pedrosa went quickest on Day 1 of the Gran Premio Movistar de Aragon, as the 'Baby Samurai' bettered teammate Marquez' FP1 fastest to go top with a 1:48.429. Marquez, quickest out the blocks in the morning, ended the day in P2 behind his teammate as the Repsol Honda squad staked a serious claim on MotorLand - a venue that has traditionally suited the Honda. Another Honda was third fastest as action opened, with LCR's Cal Crutchlow completing a top three for the Japanese factory.

Cooler ambient temperatures than can often be found at MotorLand Aragon greeted the field on the first day, with skies overcast and none of the baking Spanish heat that often beats down on the arid area that plays host to the MotorLand Aragon motorsport complex. With Repsol Honda and Crutchlow clear at the top, it was Valentino Rossi (Movistar Yamaha MotoGP) who led the Yamaha charge on Day 1 to end up P4 by the end of play, ahead of Monster Yamaha Tech 3's Pol Espargaro in another impressive Friday after the Granollers native was quickest on Day 1 at Misano. Silverstone winner Maverick Viñales (Team Suzuki Ecstar) and 2014 and 2015 MotorLand victor Jorge Lorenzo (Movistar Yamaha MotoGP) were another Spanish force to be reckoned with at the top of the timesheets, as Viñales just pipped the man he will replace in 2017 to P6.

Three Ducati machines completed the top ten, with home rider Hector Barbera the fastest rider on Borgo Panigale factory equipment as he took his Avintia Racing machine into eighth, with Danilo Petrucci (Octo Pramac Yakhnich) and Andrea Dovizioso (Ducati Team) completing the top ten on Friday. Aleix Espargaro (Team Suzuki Ecstar) was just outside the graduation zone to Q2 on Friday with another chance to push through for direct entry in FP3, and Nicky Hayden (Estrella Galicia 0,0 Marc VDS) had a solid first day on track as he replaces injured Jack Miller in the team for the Aragon GP.

Andrea Iannone (Ducati Team), after ending the morning's session in P6, then announced himself unable to continue riding for the Aragon GP as he continues to suffer with damage to a vertebra sustained in a crash in FP1 at Misano World Circuit Marco Simoncelli. As during the San Marino GP on the Riviera di Rimini, his Desmosedici is now entrusted to Ducati test rider Michele Pirro for the remainder of the Gran Premio Movistar de Aragon. 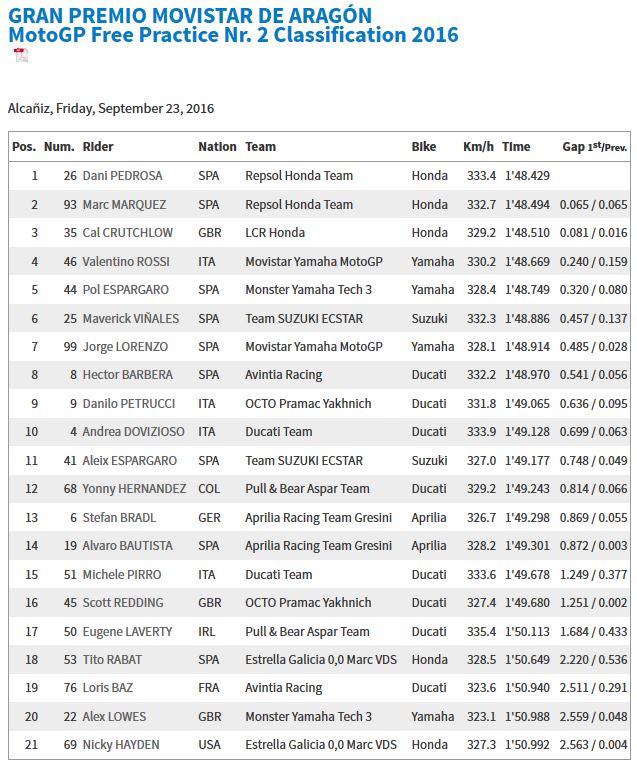