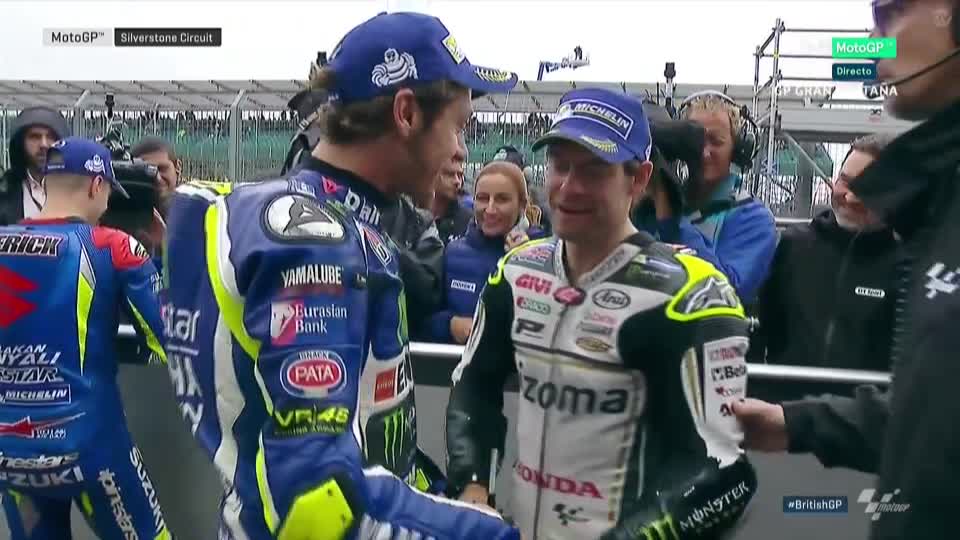 Cal Crutchlow takes a dominant home pole position in the wet at Silverstone, ahead of Valentino Rossi and Maverick Vinales.

Marc Marquez, Andrea Dovizioso and Eugene Laverty were among the pole contenders to fall during the session - Laverty while under Crutchlow's pole time on his final lap.

Alex Lowes is making his MotoGP race debut, in place of the injured Bradley Smith at Tech 3 Yamaha. Smith suffered knee ligament injuries at last weekend's Oschersleben round of the World Endurance Championship and has also been ruled out of Misano.

Jack Miller is returning to action after missing the last two races due to injuries in Austria...

Q1: Laverty and Miller - An Irishman and an Australian walk through to qualifying 2...

Eugene Laverty (PULL&BEAR Aspar) was the quickest man on track in the rain-affected first qualifying session for MotoGP™, after a wet FP4 had also seen the Irishman a protagonist. Laverty beat wet Assen winner Jack Miller (Estrella Galicia 0,0 Marc VDS) to the top spot, but both men graduate to Q2 as the fight for the top grid positions continues.

Cal Crutchlow (LCR Honda) has taken an incredible home pole position at the Octo British Grand Prix, as the Brit kept his stunning wet weather form from the Czech GP running and took only his third career pole. Crutchlow, who has shown good form at Silverstone Circuit throughout the weekend, sees his fairytale continue as he lines up in P1 once again for Sunday's race. Movistar Yamaha MotoGP rider Valentino Rossi took P2, with Maverick Viñales (Team Suzuki Ecstar) completing the front row. 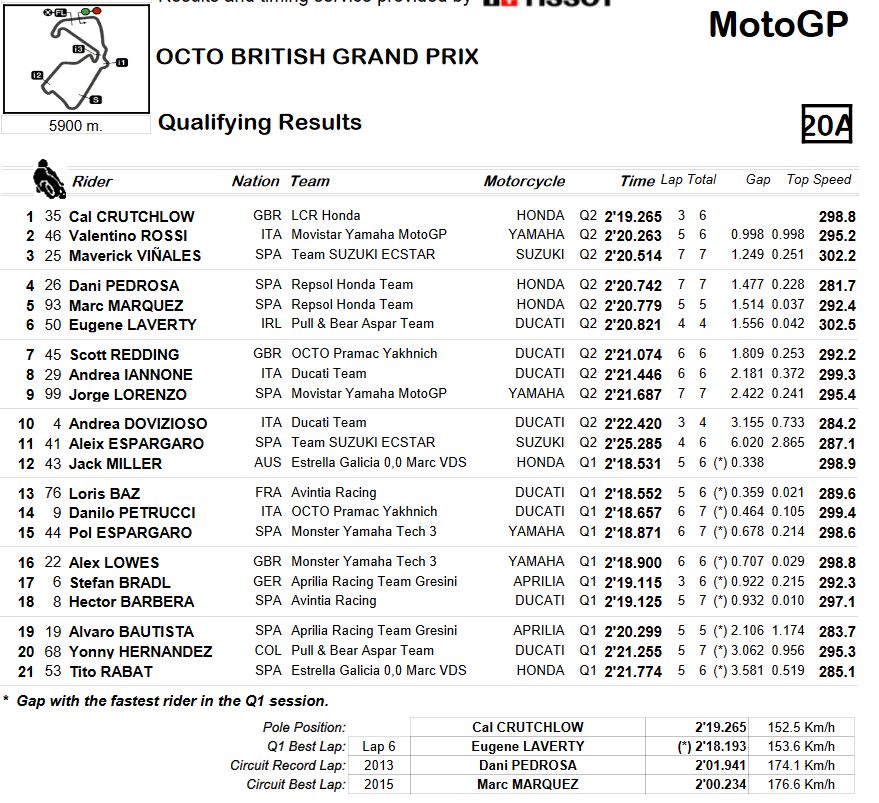 The top ten in Q2 were joined by Q1 graduates Eugene Laverty (PULL&BEAR Aspar) and Jack Miller (Estrella Galicia 0,0 Marc VDS) as the two men made the most of the weather to come to the fore, with big casualties including Pol Espargaro (Monster Yamaha Tech 3) just forced out as the wet weather shook up the order. Espargaro's temporary teammate Alex Lowes, riding in place of injured Bradley Smith, put in an impressive Q1 performance to line up behind Espargaro on the grid for Sunday's race, as the rain gave the WorldSBK rider a good opportunity to show his skill set.

Dani Pedrosa (Repsol Honda Team) has been having a solid weekend at Silverstone after a tough start to the season, and despite wet weather problems in Brno the Spaniard made good on his impressive FP4 improvements in the British GP. The cool conditions on track didn't seem to cause the problems Pedrosa has often suffered recently, and the 3-time world champion crossed the line on his final effort to pip teammate Marc Marquez to P4. Marquez, who had been a frontrunner in the session, crashed in the last third and sat the final few minutes of Q2 out as he watched on from behind the barriers. Initially on the front row, his time was still good enough for a good starting position for Sunday's showdown.

Eugene Laverty (PULL&BEAR Aspar) will line up P6 after graduating from Q1 - despite a late crash in the session that saw the Irishman lose out on a possible pole lap - in another impressive showing in tough or changeable conditions. Scott Redding (Octo Pramac Yakhnich) heads up row 3 at his home race, with a solid session that saw him recover well from a fall in FP4. Redding has a great record at Silverstone and will be looking to impress on Sunday once again, having now taken 2 podiums in the premier class. Andrea Iannone (Ducati Team) had an uncharacteristically anonymous session in the wet to cross the line for P8, ahead of reigning champion Jorge Lorenzo (Movistar Yamaha MotoGP). Lorenzo, just pipped by teammate Rossi in wet FP4, put in some good laps under the rain and was the initial leader of the session before Crutchlow struck back and he was unable to improve.

Andrea Dovizioso (Ducati Team) suffered a fall in the session and will begin the race from P10, with the Italian heading for the Medical Center to get checked out and subsequently being declared fit. Aleix Espargaro (Team Suzuki Ecstar) was P11, ahead of Q1 graduate Jack Miller (Estrella Galicia 0,0 Marc VDS), who suffered a crash near the beginning of the session as he recovers from another fall in Austria in which he suffered two hairline fractures.