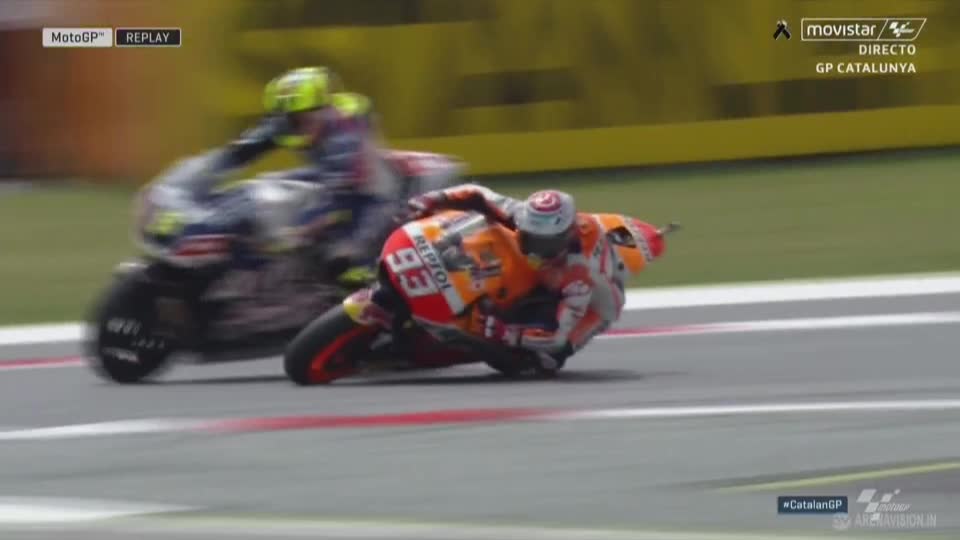 The sun continued to beat down as MotoGP™ World Championship bikes roared out of pit lane for Q2. With an air temperature of 25.5°C and a ground temperature of 42.5°C, conditions were ideal for the forthcoming battle for pole position at the Gran Premi Monster Energy de Catalunya. Marc Marquez (Repsol Honda Team) quickly set the best time of the weekend, becoming the first rider to ever set a 1’43 lap around the new layout on a Grand Prix motorcycle.

His lap wouldn’t be challenged until the final 30 seconds when the timing screens became a sea of red. Just as the flag came out Marquez recorded a 1’43.589, netting pole position as he ended 0.467s faster than his closest rival. The Repsol Honda man was the only rider under the 1’44 barrier to take his first pole position since Austin earlier in the year. Both of Marquez’s previous 2016 poles have converted into victories. This is also Marquez’s first MotoGP™ pole position at the Barcelona circuit, having never previously started higher than third in the premier class.
Jorge Lorenzo (Movistar Yamaha MotoGP) did well to produce a 1’44.056, unable to challenge Marquez’s time but a quarter of a second faster than third placed Dani Pedrosa (Repsol Honda Team). The Catalan GP sees Lorenzo out for his third straight victory of the 2016 season, arriving with a comfortable ten-point lead. Lorenzo has won the premier class edition of the Catalan GP on four previous occasions, most recently in 2015. Lorenzo did admit that he and Yamaha are struggling in the final sector, the heavy braking causing issues which need to be solved to stay with Marquez.

The Catalan GP is home to all three riders, making for a very special front row. Dani Pedrosa returns to the front row for the first time since the Valencia GP in 2015, having not started higher than fourth so far in 2016. This ends what had been Pedrosa’s longest run without a front row start since his rookie season in 2006. A 1’44.307 saw Pedrosa just able to hold onto the front row 0.015s ahead of fourth place.

Hector Barbera (Avintia Racing) was a surprise in fourth after advancing from the Q1 session. Not since the Italian GP in 2012 has Barbera started a MotoGP™ race inside the top six.

0.002s back on Barbera was Valentino Rossi (Movistar Yamaha MotoGP) who had been unable to crack the top three since the new layout was introduced. Like Lorenzo he is having some difficulties with the new layout, the Yamaha preferring longer, faster corners as opposed to the more stop-start nature of the new course. Even in fifth, Rossi was only 0.017s off a front row start. 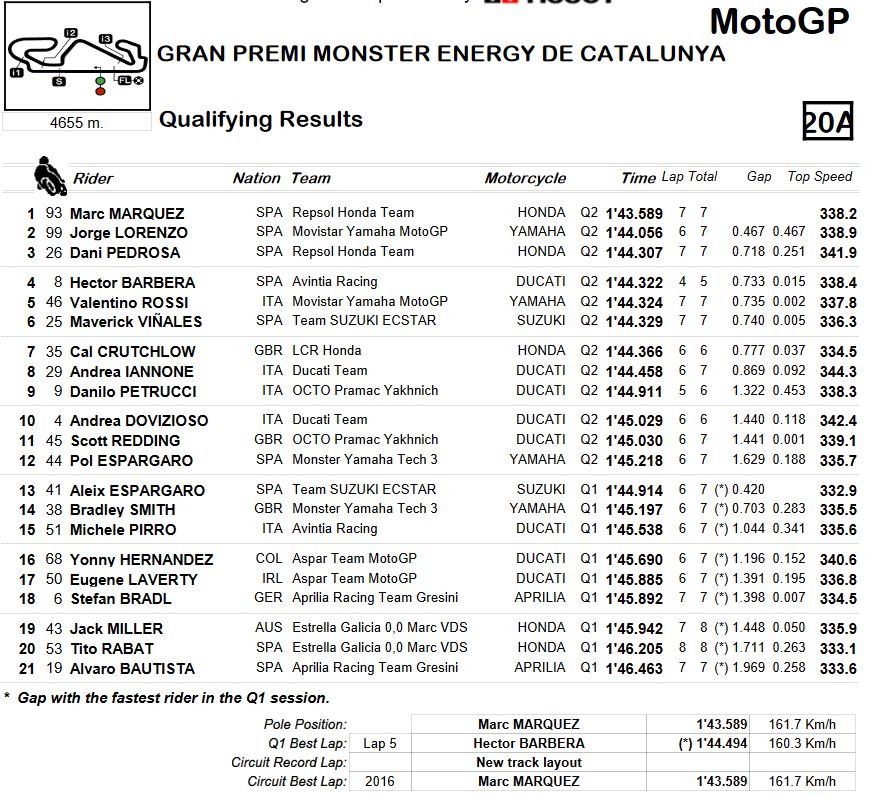