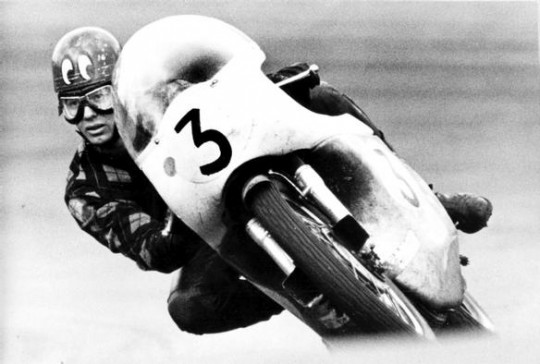 John Cooper (born 24 January 1938 in Derby) is an English retired garage proprietor who was a prolific short-circuit motorcycle road racer during the 1960s and early 1970s. He also entered selected Grands Prix motorcycle road races. His best season was in 1967 when he finished the year in seventh place in the 500cc world championship.[1] Cooper was a two-time winner of the North West 200 race held in Northern Ireland.[2] He is remembered for his upset victory over the reigning 500cc world champion, Giacomo Agostini at the 1971 Race of the Year held at Mallory Park.[3] Cooper rode a BSA Rocket 3 to finish three-fifths of a second ahead of Agostini's MV Agusta, achieving his fifth victory in the race since 1965.[4]
John Cooper's BSA Rocket 3

A section of the Mallory Park, Leicestershire circuit has been renamed from Lake Esses to the John Cooper Esses in his honor.

John Cooper's racing career extended over almost 20 years and his greatest achievements were during the three years before his retirement. Known for most of his racing life as a successful private rider, Cooper had to wait until 1971 before securing his first major factory contract. Riding a 750ce BSA-3 he won the Champion Spark Plug Classic (and £6,000) in Ontario, California, in 1971 at his first attempt. Earlier, on the same machine, he had scored his second suc- cessive victory in Mallory Park's Inter- national Race of the Year, this time beating Ciacomo Agostini on'the 500ce MY. After 30 laps of the 1.35 mile Leicestershire circuit Cooper won by three-fifths of a second from Agostini. 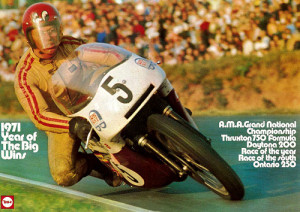 John Cooper, tall and bespectacled, was born in Derby in 1938 and first raced in 1954 when he was 16 on a 197ce Janies. His first major victory was at the Scarborough International in 1961. He was a prolific racer in the 1960s becom- ing British Champion on four occasions: 350ce (1964/66), 500ce (1966), 250ce (1968). He almost retired in 1969 following a fall at Cadwell Park. but the Yarnsel machine, a 350ce hybrid consist- ing of a Yarnaha engine in a modified Seeley frame, was responsible for main- taining his interest and 'bringing him further success. Out of 23 races with the Yamsel he won 18. John Cooper has always been closely associated with Mallory Park which was regarded as his home circuit. He first won the Race of the Year there in 1965, and won it twice more, in 1970-71. Flis most outstanding successes came in 1971 and 1972 with BSA-Triumph. He registered 15 firsts, 6 seconds, and 10 thirds - plus 14 fastest laps including four lap records. Other important wins included the Race of the South at Brands Hatch in 1971, achieved   against    strong    opposition including Agostini on the MY, and the Motor Ciele Neits Superbike Cham- pionship in 1972. He was voted Man of the Year by readers of Motor Cycle News in 1970 and 1971 (with the most votes ever in the competition to that time). After his dramatic success in the Ontario event he was offered a contract with Norton, but preferred to stay with BSA/Triumph. He finaiiyjoined Nortons in 1973 but virtually retired from racing after breaking a leg at Brands Hatch that year. John Cooper spent most of his long career without a factory contract and for this reason did not compete seriously in classic events. Noted for his outspoken comments, he was a strong critic of the TT races, claiming the rewards for corn- peting and winning were in no way related to the importance of the race, the additional revenue the Isle of Man authorities received from the racing, or the dangers the course imposed. John Cooper became distinctive by the 'moon eyes' painted on his crash helmet, an idea adopted early in his career. 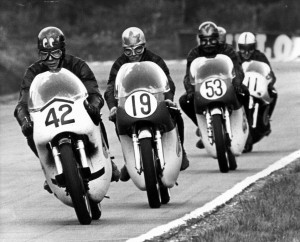