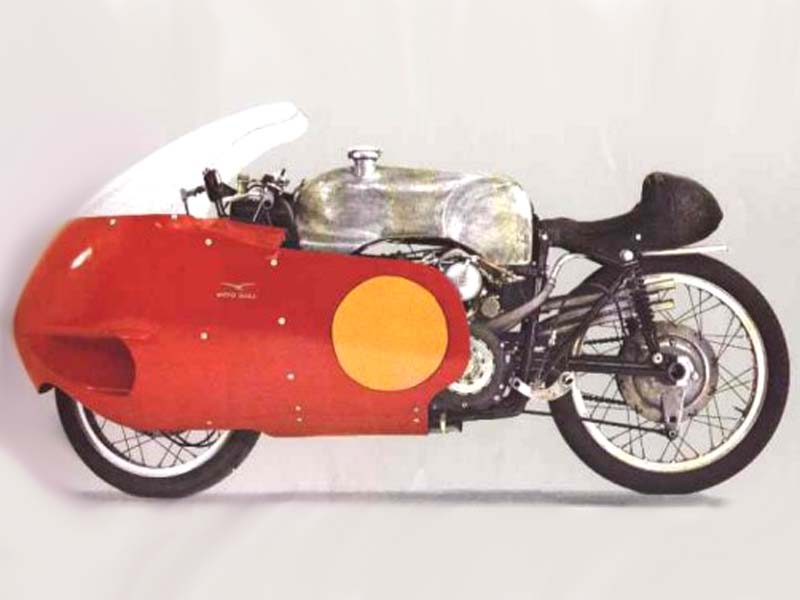 In mid 1957; the Guzzi V8 500cc was finally ready to express itself fully in races... Unfortunately; no one wasNaked North-East View there to ride it... Lomas, Dale, Campbell and Colnago were all "out of the game"... If Moto Guzzi weren't to retire at the end of 1957; all agreed that it would have made the "nightmare" of all dominnats racing bikes... 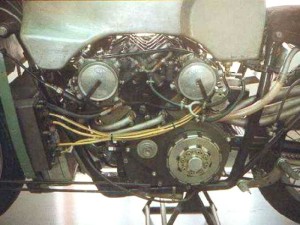 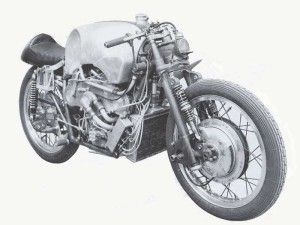 Here is the story:

In September 1954; just after the Monza's GP, a meeting where Dr Carcano, Enrico Cantoni, Umberto Todero, Ken Kavanagh and Fergus Anderson were present. The subject of that meeting was: the development of a 500cc that would beat all present tenors and dominating bikes; and it will also be the tech window of Moto Guzzi. Thus the V8 technology.
The project was kept secret from anyone that wasn't part of the racing development team. Carcano made the general lines and the drafts were made by Enrico Tantoni. Todero was part of the project but he was much busy for his involvement in the 1955's 350cc that took much of his time.
On the first of February 1955; Fergus Anderson, then Racing Team Manager, wrote a letter to the medias announcing the V8 project. Whether it was a mistake blamed by the General Management of Moto Guzzi or not is unclear to me; since many controversial reports have been made... It does not really matter for us right now; we just want to talk about the marvelous of the technology... 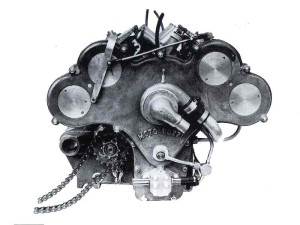 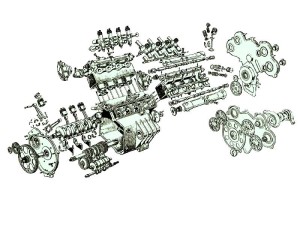 At Modena; in April; Anderson destroyed the bike at its first trial; and it seems that this lead to the departure of Anderson from Moto Guzzi at the end of the races season; tho all this is speculations again.

The facts told by Ken Kavanagh:

Spa 1955: all crankshaft's bearing were broken during practice.
Senigallia 1955: Ken Kavanagh had to stop for mechanical failure.
Monza 1955: A tuning screw... screwed up...
Imola 1956: Ken Kavanagh had to stop because of overheating of the engine while he was leading the race. Ken Kavanagh was in tears at that abandon... Which is understandable after having working so hard to make the bike the best of its era.
Hockenheim 1956: Ken Kavanagh was leading the race and had to retire after 6 laps because of rod needle-bearings break.
Assen 1956: After a unfortunate problem on the Masetti's MV (the gas tank lid got lose and Maseeti was suddenly blinded by the gas); Ken Kavanagh retired. Masetti fall due to the collision with Ken but Ken stayed on saddle with a broken brake pedal.

Until then; only Ken Kavanagh had driven the V8; but another bike was on its way. Dickie Dale was called to start the tests on the bike at Monza. Dickie confirmed the problem that Ken had many times complain as to know that in the fastest curves - such as the Ascari curve taken at ~ 240KM/h - the V8 was incontrollable...
According to that; Guzzi factory invited Stanley Woods who was unable to test the V8 otherwise than in straight lines; due to track work on the new circuit design. Of course Stan could not judge the real status of the bike but when Ken suggested to use a different and known front fork (such as a Norton Manx's) then Carcano felt offended... At that time; Bill Lomas was starting to befriend the team and suggested that a masses distribution could be the problem and that a longer back swing arm would remedies.

Spa 1956: With the longer swing arm; Kavanagh got so many frightening postures that after few practice laps he stopped and talked with Caltano. He told him that in that configuration; he can give the bikes to Lomas or Woods. It was the last time Ken Kavanagh drove the Guzzi V8...
Solitude 1956: Bill Lomas was second behind Duke. They both retired at once; Lomas experienced Water temperature problems.
Senigallia 1956: Bill Lomas fall after few laps trying to catch on Monneret (Gilera). Liberati on the other Gilera will win the race.

At Monza, Lomas was severely wounded with the 350 Mono Guzzi and stay out of the circuits for a while... Keith Campbell was invited to take relay.

Monza 1956: after a rough start, Campbell had to retire before even completing 1 lap; the crankshaft bearings broken... Since 1954 that rod bearings with needles on aluminum cages wasn't changed.

Latest configurationSyracuse 1957: Colnago won the National Italian Race.
Imola 1957: Bill Lomas wounded again badely; always on the 350 mono and stayed away of tracks until Assen. During practice, Colnago fall in Tamburello (Senna curve now) and was severely wounded. He never drove the V8 again.
Hockenheim 1957: Dale finished 4th; Campbell retired due to engine failure.
TT Isle of Man 1957: Dale finished 4th while the V8 only fired on 7 cylinders!
Assen 1957: Lomas resume racing but fall during practice; severely wounded at the head, he stayed long time between life and death. He will stop his career after that. Dale fall too with the 350cc and broke both ankles; he will be out until the year after.
Spa 1957: Campbell took the lead of the race but had to retire on engine failure.
Monza 1957: During practice, Campbell fall at high speed in Ascari (Senna) curve. The bike slide on 250 meters (measured by Ken Kavanagh and the Moto Guzzi mechanicals). He broke a wrist and a shoulder and stayed unavailable until 1958; when he found his destiny July 13 on a Norton during the French GP (Cadours).

Bryen made some tests but refused to race the bike. Therefore, after Monza 1957; there was 2 Moto Guzzi available in the park but... No pilot to drive them... Then finished the story of the Moto Guzzi V8 - An Holy Monster... 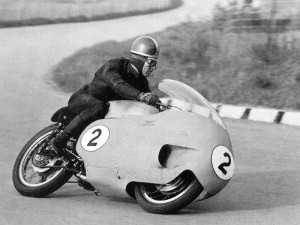 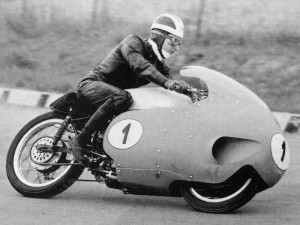 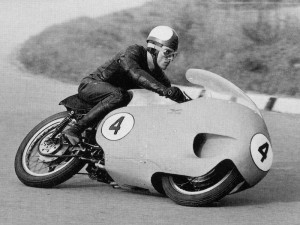 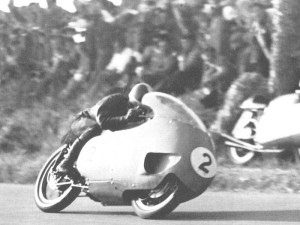