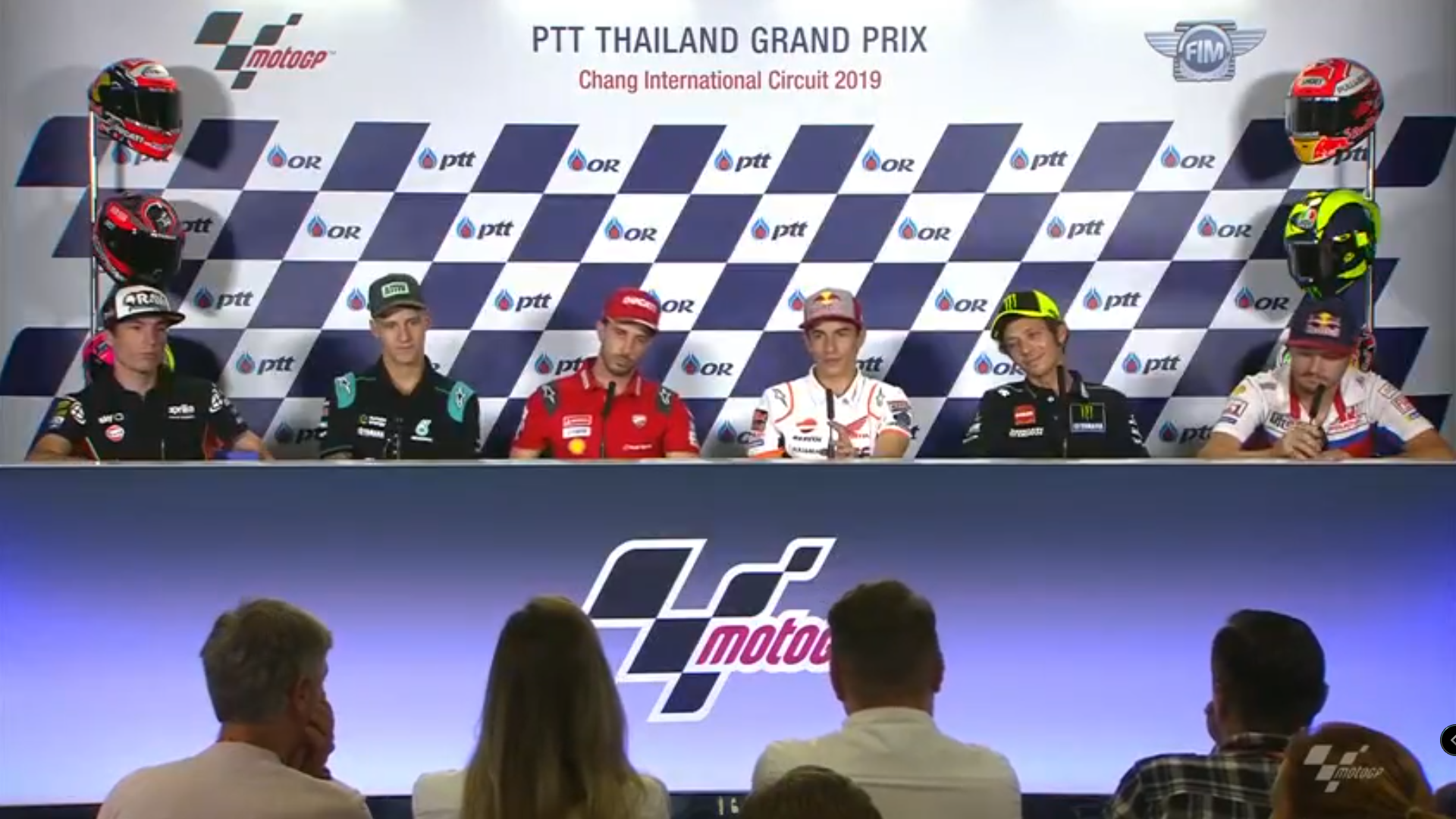 "Balle de Match" for Marc Marquez, more chips for Fabio Quartararo, last ditch for the Ducatis. How is Buriram Thai GP gonna change this year and next year?

It may be the first match point for Marc Marquez (Repsol Honda Team) at this year’s PTT Thailand Grand Prix at the Chang International Circuit, but the seven-time World Champion is already weighing up the opposition for next season. The Spaniard, who could make it an eighth this weekend, has said that 20-year-old Fabio Quartararo (Petronas Yamaha SRT) could be his main championship rival in 2020, looking to the future of their rivalry which has so-far peaked at Misano.

Quartararo’s stunning rookie season has taken the MotoGP™ class by storm, with the formidable Frenchman counted as one of Marquez’ main rivals next year. With four podiums from his 2019 season and the highest placed Independent team rider, Quartararo has been touted by Marquez as “one of the fastest” and a “real contender” for MotoGP™ champion in 2020.

Speaking of his rival, Marquez said: “Fabio, now, is the youngest rider in MotoGP and, for me, he’s one of the fastest ones. He has the speed and is especially fast in FP and QP. His speed, if I compare him to my opponents, he’s one of the strongest ones in that area. But he’s very young. With more experience he will be very fast and consistent and will manage the situations differently. For me, he’s a real contender for next year in the Championship.”

Earlier on in the Press Conference, Quartararo had commented on Marquez’ sensational 2019 season, where many records have been broken: “I think it’s difficult to say. Marc only missed one championship in MotoGP, but this year we’ve seen the consistency; apart from Austin; his worst result is second, so I don’t know. He’s taken a lot of victories, he’s really strong, so honestly I don’t know how to explain it!”

With the rivalry always one to watch in the qualifying sessions, and recent races featuring Quartararo and Marquez at the forefront, it could be a duel to enjoy thoroughly throughout 2020, as Quartararo goes in search of success whilst Marquez will look to resist the Frenchman’s onslaught and hold onto it.

Fabio Quartararo looks like he will be in for a tidy upgrade to his Yamaha machinery due to his sensational performances in 2019. Lin Jarvis confirmed to Simon Crafar at the PTT Thailand Grand Prix that the 20-year-old will be the recipient of a “good plan” from Yamaha. What the good plan consists of is yet to be confirmed but that should be “officialised in the next two or three weeks.”

Speaking to former Grand Prix winner Crafar in Pit-Lane, Jarvis confirmed Quartararo has been given upgrades already in 2019: “The difference this year is marginal, and we’ve been able to give him a couple of upgrades throughout the year too.

After the Frenchman’s stunning 2019 season which has consisted of four podiums and three pole positions, whilst also leading for the majority of the race at Misano just over three weeks ago. So what does the future hold for the young Frenchman with regards to his connections to Yamaha?