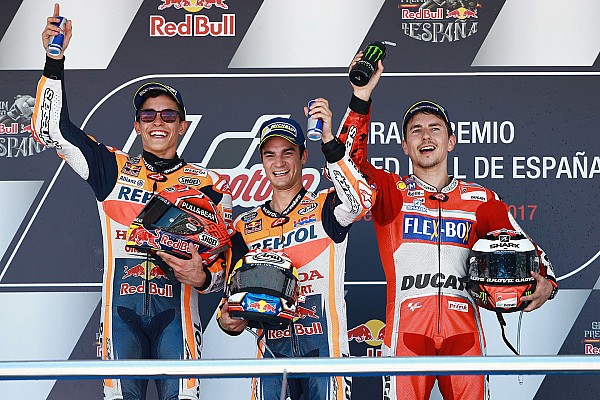 Dani Pedrosa (Repsol Honda Team) took an impervious victory in his home Gran Premio Red Bull de España, storming away from his first pole position since Sepang 2015 and never looking back. The MotoGP™ race in Jerez was race number 3000 in the World Championship and one of the riders equal third on all-time podiums proved a fitting winner. Reigning Champion Marc Marquez (Repsol Honda Team) made inroads in the points battle in second, ahead of a stunning home ride from another five-time World Champion – Jorge Lorenzo (Ducati Team), sharing the podium with Pedrosa to keep the parity at 146 rostrum finishes apiece for the former nemeses.

The gap fluctuated at the front but Marquez was unable to make any real impression on Pedrosa’s lead, with the three-time World Champion pulling the pin in the final laps to cross the line in clear air for another stunning win – making it 16 years in a row the Spaniard has taken at least one victory in the World Championship.

Lorenzo had an incredible race on home soil for a first podium with Ducati, moving past Zarco after a positive weekend all round and pulling away to jubilation for the ‘Spartan’ as he pulled into parc ferme. Zarco took fourth in another scintillating performance for the reigning Moto2™ World Champion, ahead of an impressive fight back for Andrea Dovizioso (Ducati Team) to get past Viñales after the Spaniard made a mistake.

Danilo Petrucci (Octo Pramac Racing) stormed back through from P13 on the grid to follow Viñales over the line, with Jonas Folger (Monster Yamaha Tech 3) solid once again in the top ten to take eighth.

Aleix Espargaro (Aprilia Racing Team Gresini) was another who moved through the field, incredibly taking 2016 Jerez winner and Championship leader Valentino Rossi for ninth. The ‘Doctor’ found his pace in freefall in the latter laps of the race, struggling with tyre life in the hot temperatures to complete the top ten – but retaining the Championship lead.

Scott Redding (Octo Pramac Racing) had a much improved race in 2017 to take P11, ahead of Hector Barbera and teammate Loris Baz (Reale Avintia Racing). Bradley Smith took more points for Red Bull KTM Factory Racing in P14 after an awesome show for the Austrian factory in Jerez, with Karel Abraham (Pull&Bear Aspar Team) locking out the top fifteen.

After Pedrosa’s stunning domination on home turf, the Championship is game on in Le Mans with Rossi now two points clear of Viñales, Marquez just behind and Pedrosa now fourth in the standings – only ten points back.