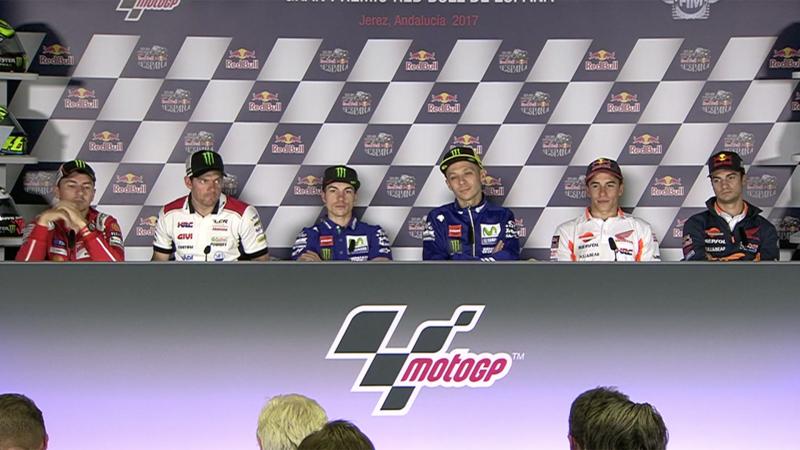 Raring to race in Jerez as MotoGP™ lands back in Europe. Spanish GP pre-event Press Conference talks milestones, atmosphere and the challenge of the European leg of the season

The Grand Prix of the 3000th race in the World Championship kicked off the historic milestone-maker of a weekend with the pre-event Press Conference in Jerez, with Championship leader Valentino Rossi (Movistar Yamaha MotoGP) joined by his teammate Maverick Viñales, Repsol Honda Team’s Marc Marquez and Dani Pedrosa, LCR Honda rider Cal Crutchlow and Jorge Lorenzo (Ducati Team) – as well as cameos from two of the riders to have taken the most wins during the 3000 in history. The rider with the most, Giacomo Agostini, and the rider in third behind Rossi, Angel Nieto, also said some words before the event kicked into gear - with the riders then present having taken more than 500 wins combined.

First to speak about the weekend as the paddock heads back onto winning turf for the ‘Doctor’ was Valentino Rossi, who started a common theme amongst those present - the history and atmosphere of the tracks in Europe: “It’s great to come back to Europe, it’s where the oldest tracks with great history are – a different atmosphere, with a lot of fans. It’s always a great pleasure. To arrive here at the top of the Championship is great, coming from three good results at the start of the season. Last year was a great weekend, I was able to win – an important victory – but every year is different. This track is fantastic, it’s always difficult but it’s a great pleasure to ride a MotoGP bike here. It would be hard to get the 500th win for Yamaha on Sunday, but for sure we will try!”

The man now in second after a crash out of contention in Texas is teammate Maverick Viñales, who focused more on what he has to learn following his first DNF in over a year: “Let’s take all the positives…it was a little mistake and we have to learn from that. But it was only the third race where I’ve been at the front and I need to get a lot of experience still, and I have a lot to learn. Jerez is a good track for our bike so we want to take 100% from the bike. Right now we have really good grip at the rear, and for sure we’re going to be there. We have to be intelligent and bring home the maximum points.”

Marc Marquez took maximum points at the Circuit of the Americas, and the reigning Champion added that a good setup in Jerez can often translate well onto other venues – and that the test on Monday would also be a key focus, alongside aiming to fight for the podium: “Austin was the time to push and the time to get a good result because our performance in the first part of the first races was good but for some reason on Sunday I wasn’t able to finish in a good position. We did a test here, I felt good, the pace wasn’t so bad, but now we arrive with a different bike because we learnt a lot during the first races. It’s a good track and difficult track – also for the tyres. Last year we were there until Sunday when the temperature was really high, so we’ll see but we’ll try and fight for the podium. Coming back to Europe…the tracks are different, more narrow, some shorter…sometimes when you find a good base setup here in Jerez it can work on a lot of circuits so we’ll work hard this weekend and in the test.”

Cal Crutchlow was another happy to be back closer to home – and is also eager to get going in Europe as races and tests begin to fill the horizon: “It’s not a bad start to the season, except I crashed in Qatar. In Argentina I felt strong and good, and in Texas I didn’t feel fantastic but I had a good result anyhow. I think coming back to Europe it suits me a bit better. I prefer to be closer to home and riding the tracks here! I’m looking forward to this phase of the season starting; we have quite a few races and tests quite close together so we’ll be riding a lot in the next couple of months. I’m looking forward to it and hopefully we can have a good race weekend here in Jerez. We have pretty good direction at the moment and we want to keep the momentum rolling.”

Another looking to keep momentum after an impressive race in Texas to take his first podium of the season is Dani Pedrosa, who agrees the atmosphere of Jerez is something he enjoys a lot – as well as the riding: “It’s a great place, the track and the atmosphere…I’ve liked it here for many years. I’m happy to be here from the last race, hoping to keep my momentum and improve some things. Enjoy it, because it’s much more fun when you’re riding well. Qualifying is very important these days, more than before, but I’m looking forward to improving there and finding better feeling then – especially at this track where the laptimes are quite tight."

The other milestone in the weekend is a more personal one than race number 3000, as five-time World Champion Jorge Lorenzo turns 30 – and celebrates 15 years in the World Championship. Debuting on his 15th birthday on qualifying day after being too young to take part in Free Practice the day before, the ‘Spartan’ was positive about the occasion and about the weekend – working harder than ever: “30 years old seems a lot but they say 30 is the new 20 so I feel well! The season hasn’t started very well, and expectations were very high with my arrival in Ducati. Things won’t be as easy as it seemed, it will take time for me to adapt to a special and difficult bike like the Ducati. But little by little it’s getting better. The bike for the moment isn’t the perfect bike for my riding style, but every time I’m getting faster and more comfortable. I’m working harder than ever and I’ll do whatever it takes to make the Ducati competitive in the future. It’s hard but I have a good attitude and I’m happier than ever. I’m trying to work as hard as possible to give them results as soon as possible. Jerez for Ducati isn’t the best track, but it is for me. So I’ll try and compensate for the difficulties we could have here with ambition and feeling good on the bike.“

Ambition is big for everyone ahead of the Spanish GP, as the title fight tightened up once again after Austin. With a grid full of fan favourites and home heroes – and the grandstands even fuller – the weekend is sure to be a perfect starting point for the next phase of the season. And in Jerez, sometimes it can all come down to the final corner...